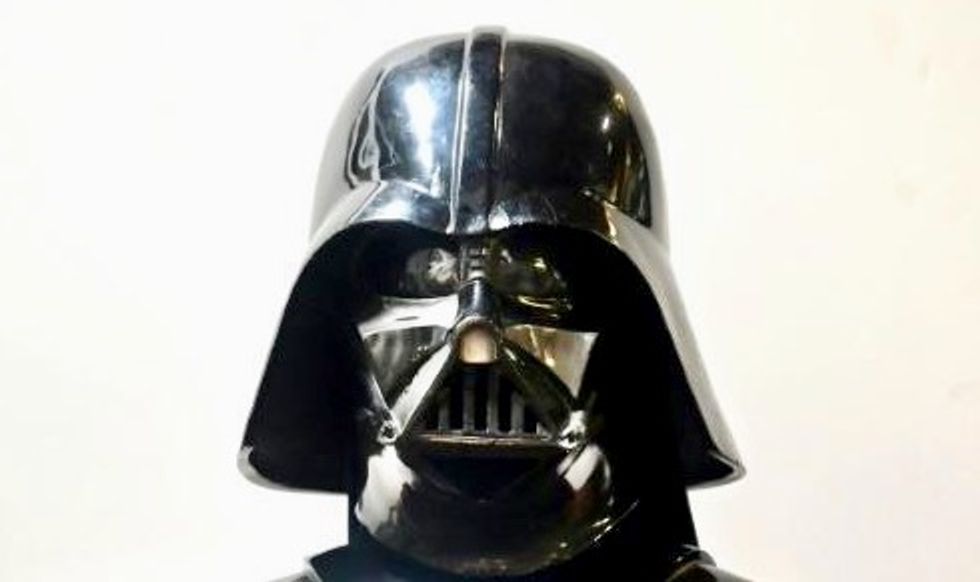 Darth Vader's helmet from "The Empire Strikes Back" (AFP)

Darth Vader's helmet from "The Empire Strikes Back" is among a vast collection of coveted Hollywood treasures going under the hammer next month, with experts predicting it could fetch nearly $500,000.

The mask and helmet is one of only a handful worn by actor David Prowse, who played Luke Skywalker's nemesis and -- spoiler alert -- father on-screen in the 1980 "Star Wars" blockbuster, making them the "holy grail" of science fiction artifacts, according to auction organizers.

"The catalog estimate is $250,000-$450,000, and you never know what something will go for until it crosses the block -- it could well exceed that," said Zach Pogemiller of auctioneer Profiles in History.

"Star Wars is always popular. It's never been hotter than it is right now, with the franchise continuing as strongly as it is."

The "Icons and Legends of Hollywood" sale will take place September 25-26 in Los Angeles, with nearly 1,000 lots together expected to sell for over $10 million.

It will feature items from some of Tinseltown's most iconic movies, ranging from Hollywood's golden age to contemporary action movies and sci-fi.

Up for grabs will be a black-and-white dress worn by Dorothy -- or more specifically, Judy Garland's camera double Barbara Koshay -- in 1939 classic "The Wizard Of Oz," which is estimated to reach up to $500,000.

A prototype moon buggy stolen by James Bond from villain Blofeld's secret lair in "Diamonds Are Forever" will also go under the hammer, with an upper estimate of $600,000.

Among additional items expected to trigger bidding frenzies are a dress worn by Rose (Kate Winslet) in "Titanic", the DeLorean car smashed by a train in "Back to the Future III," and an authentic best picture Oscar statuette from 1948.

"You always hear stories of movie studio personnel who rescued what are now priceless pieces from the dumpster because they were being thrown out," said Pogemiller.

"It's incredible that people really didn't have the foresight until relatively recently to preserve all of these important artifacts that are part of our cultural history."