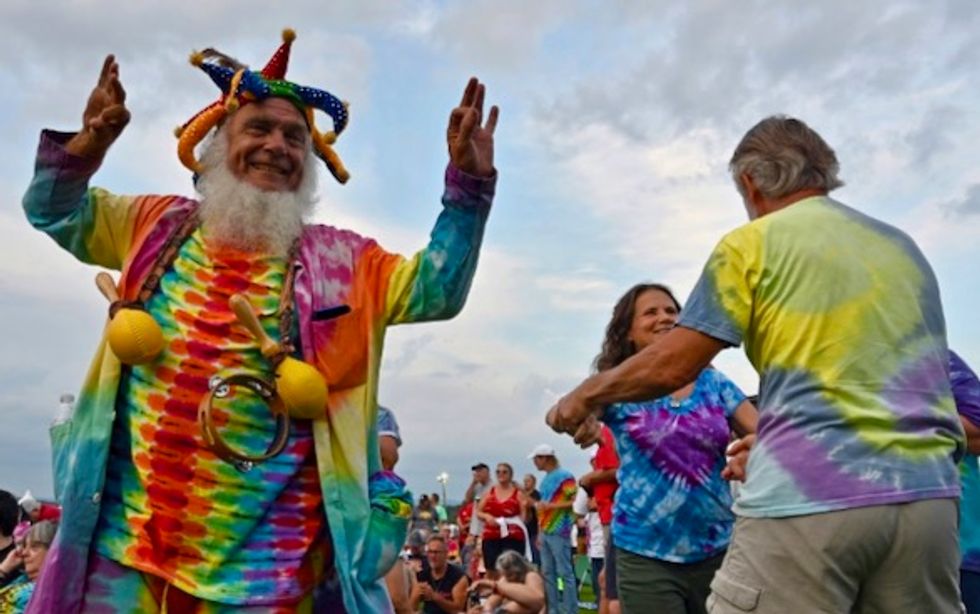 Fifty years ago Thursday Les Poinelli was hitch-hiking to the now storied Woodstock music festival he'd heard about on the radio -- and hopped in the car where he would meet his wife.

Today he's returned to the bucolic town of Bethel in New York's Catskill region where his life changed forever, joining droves of aging hippies donning tie-dye, flower crowns and fringed suede vests hearkening back to the golden age of peace, love and music.

"You couldn't help but be overwhelmed by the crowd and overwhelmed by the generosity of the people," Poinelli, then 19, told AFP, standing near the site of the stage where rock legends including Jimi Hendrix, Janis Joplin and Santana jammed before nearly half a million youth under a tremendous downpour.

AFP / Angela Weiss Les Poinelli met his wife 50 years ago while on his way to the Woodstock Music Festival, and has gone to every anniversary celebration since

After spending the weekend with his new sweetheart Gail, the teenagers walked around the back of the stage, as Joe Cocker began to play, to say goodbye before she headed back to Long Island, New York and he returned to Connecticut.

"I gave her a peck on the cheek, and that was our sex for the weekend," the softspoken 69-year-old said with a wide smile, his framed original tickets in hand.

Two years after falling for each other as they swayed to classic acts including Creedence Clearwater Revival and Canned Heat, the pair married and had five kids and 12 grandchildren.

Revered by many as the cultural touchstone of a generation, the 1969 Woodstock festival saw hundreds of thousands of people descend on Max Yasgur's alfalfa fields in upstate New York that August 15-18, partying to rock's greats and imbibing in psychedelics as torrential rains swept in.

The festival is venerated as a beacon of hope that emerged out of the tumultuous 1960s.

The historic site is now operated by the nonprofit Bethel Woods Center for the Arts, which holds regular concerts and runs a museum to memorialize the Woodstock legend.

Its 50th anniversary commemoration kicked off Thursday with a performance from singer Arlo Guthrie -- the son of folk revolutionary Woody Guthrie -- who played the 1969 weekend as a baby-faced 22-year-old.

AFP / Angela Weiss US singer-songwriter Arlo Guthrie performs during the 50th anniversary celebration of Woodstock at Bethel Woods Center for the Arts, the original site of the 1969 festival

As crowds in the back yelled for higher volume, Guthrie, wearing a straw hat and leather vest, chuckled.

"I realize at this point in life most people out here need hearing aids to begin with," he said to a chorus of laughs from the baby boomers, some of whom danced as most reclined in lawn chairs, rather than cavorting shoulder to shoulder as they once did.

Before launching back into his set, which included classics like "City of New Orleans," he gave fellow hippies a deadpan warning: "Don't take the brown antacid."

The concert series will continue throughout the weekend with performances from Ringo Starr, Santana and John Fogerty of Creedence Clearwater Revival.

Among the early birds Thursday was Kevin Waite, who attended Woodstock at age 19 and returned this year with his wife, 37-year-old daughter and eight-year-old granddaughter.

He's been growing his beard out since December, both to celebrate his recent retirement and the weekend's festivities.

"I've got to get it cut September 1st," he laughed.

Attendee RJ Pinto makes pilgrimages to Bethel most years, where he says he can feel the aura of camaraderie he felt half-a-century ago.

"Peace, music and love; it's really here," the biker said emphatically. "It was a world phenomenon."

Pinto says he saw it all amid the chaos -- but stealing a kiss from Joplin stands out.

"She could grab your heart," he said from his motorcycle. "Janis was the most incredible gal... we surrounded her until I had a chance to hold her hand and give a kiss on the cheek."

Members of the hippie generation are traveling from near and far in search of the proverbial Woodstock Kool-Aid: Patrick Depauw made a special trip from Belgium, despite being just 10 years old in 1969.

His pivotal moment was seeing the 1970 Oscar-winning film that cemented the festival's place as a pop culture phenomenon.

"My entire life was permeated by this event, and I could only think of realizing my dream and coming for the 50th anniversary of Woodstock at the original site," the tie-dye clad 60-year-old told AFP in his native French.

The spirit of Woodstock, he says, is returning "because events on the American continent or in Europe are concerning," he said. "More and more the world lacks solidarity, and this type of movement promotes, I would say, solidarity."

As Poinelli does most days, the morning before arriving in Bethel to partake in the festivities the retiree visited the grave of his wife, who died in 2016.

"From Woodstock to forever," the headstone reads.

Looking around the rolling hills of the former Yasgur farm, where a giant peace sign is mowed into the grassy main lawn, Poinelli smiled: "That's where life started."