#FirePantaleo: Demands for justice as NYPD officer who used fatal chokehold on Eric Garner gets suspension 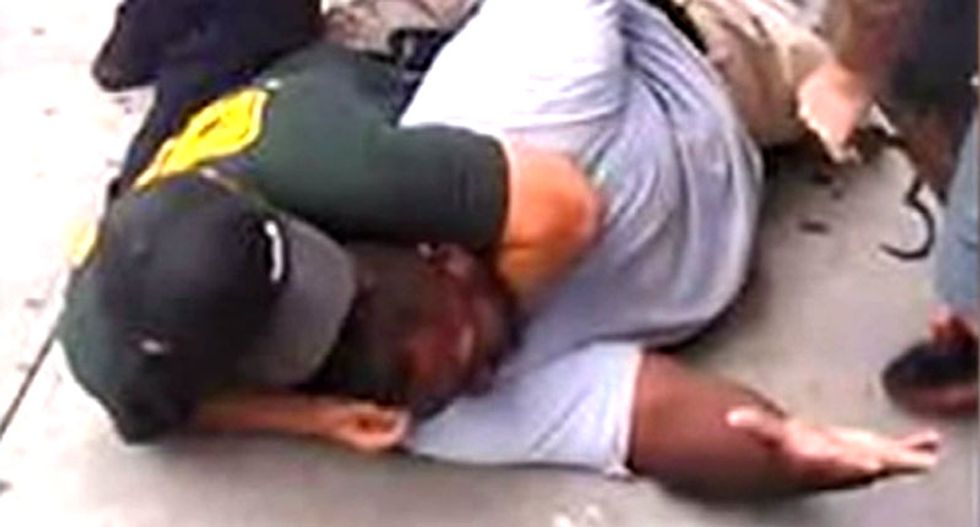 The New York Police Department announced Friday it was placing officer Daniel Pantaleo—who placed Eric Garner in a banned and fatal chokehold in 2014—on suspension following an administrative judge's recommendation earlier in the day that Pantaleo be fired.

The developments sparked the hashtag #FirePantaleo to light up Twitter and ignited renewed demands from Garner's family for justice and "true accountability."

In her recommendation, [NYPD Deputy Commissioner of Trials Rosemary] Maldonado found Pantaleo guilty of one of the two charges against him—recklessly using a chokehold banned by the NYPD. She cleared him of the second charge, intentionally restricting Garner's breathing. Pantaleo testified before the grand jury that he used a department-approved seatbelt takedown maneuver on Garner.

Maldonado's recommendation that Pantaleo be fired is going unheeded—at least at this point.

Now it is up to the city's police commissioner whether Pantaleo will keep his job, a decision the department said will come this month.

The NYPD announced that the officer has been suspended effective Friday in keeping with longstanding practice when there is a recommendation for firing.

Scott Hechinger, a public defender and director of policy at Brooklyn Defender Services, said that firing Pantaleo "is literally the very least NYPD could have done." Instead, said Hechinger, the department is sending "a chilling message to cops: 'Do anything. We got you.'"

As Hechinger referenced, Pantaleo's killing of the 43-year-old father was captured on video.

That video—which showed Garner repeating, "I can't breathe, I can't breathe" as he was pulled to the ground—went viral and became a rallying cry for justice for police brutality.

Online racial justice organization Color of Change said in a tweet Friday: "#EricGarner and his family deserve justice. It's been 5 years too long. Nothing will bring Eric back, but the NYPD Commissioner and @NYCMayor must follow this long overdue recommendation and #FirePantaleo to finally provide justice to Garner's family. #JusticeforEricGarner"

Eric Garner's mother, Gwen Carr, said Maldonado's recommendation brought her "some relief," but she reiterated her call for Pantaleo and "all of these officers who engaged in misconduct related to Eric's murder" to be fired.

"My family and I have been fighting for five long years for justice and accountability for Eric's murder—and Mayor de Blasio and the NYPD have put up roadblocks and delays every step of the way. It brings me some relief to learn that Judge Maldonado has recommended that Pantaleo be fired—but the recommendation is long overdue, I'm still not allowed to see Maldonado's report, and we still have a ways to go before there is true accountability for Eric's murder. It's past time for Mayor Bill de Blasio and the NYPD to end their obstruction, stop spreading misleading talking points, and finally take action for my son.

"Pantaleo must immediately be put on unpaid suspension so that he doesn’t continue to profit from the murder of my son, he should be stripped of his badge and weapons immediately, and he should be fired without a pension, benefits, or a 'good guy letter.'

"A disciplinary trial for Sgt. Kizzy Adonis must be scheduled immediately, and all officers responsible for my son's death and for engaging in misconduct to cover it up must be charged and fired—including Justin D'Amico and Lt. Christopher Bannon.

"My son deserves more than recommendations; he deserves justice. New Yorkers deserve to know that police who kill our children and those who try to cover it up will be fired from the NYPD so that they don't get paid with our taxpayer dollars to be a danger to us. I will continue to fight—and I'm asking everyone who supports me in NYC and around the country to continue to fight—until there is accountability for Eric and for all New Yorkers, and until Pantaleo and all of these officers who engaged in misconduct related to Eric's murder have been fired from the NYPD."

Carr wasn't alone in urging de Blasio to use his influence to effect Pantaleo's ouster. De Blasio was interrupted by hecklers who shouted "Fire Pantaleo" on Wednesday during the Democratic presidential primary debate. And Justice League NYC, an initiative of criminal justice reform group Gathering for Justice, made a similar call Friday.

"Finally, after five long years," said Justice League NYC, "a judge has seen what we've always seen—#EricGarner was killed by an illegal chokehold and the moral obligation is to #FirePantaleo—and now it's time for @NYCMayor to act."