Fox and Friends: Climate change is the left’s ‘religion’ – it’s how they ‘control your life’ 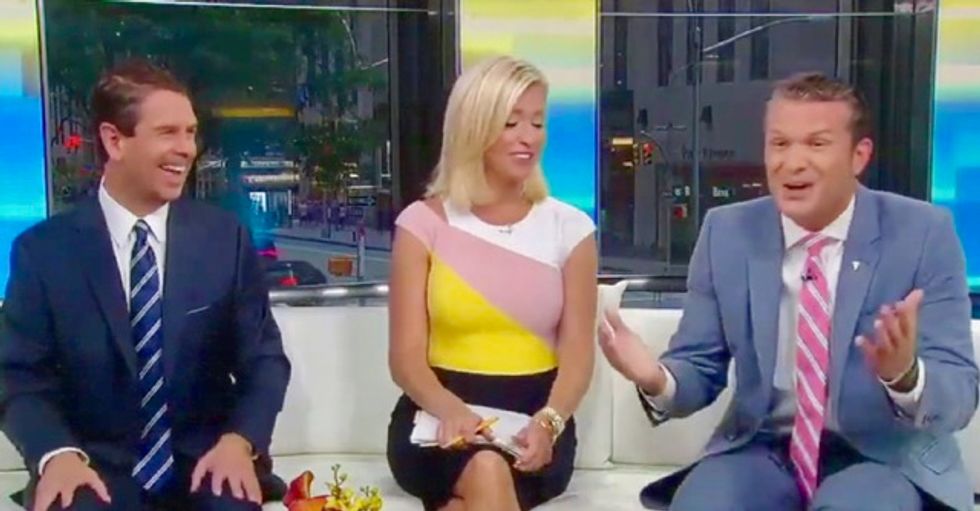 “Fox and Friends” took a swing at the very real crisis of man-made climate change Tuesday morning, with guest co-host Pete Hegseth saying it’s not a “real threat,” like ISIS.

Co-host Ainsley Earhardt mocked Senator Bernie Sanders for saying climate change is a greater threat to U.S. national security than ISIS (the DoD has made similar observations). Hegseth, who once was on President Donald Trump’s short list to head the Department of Veterans Affairs, launched into a rant.

“The Left says that all the time. This is what they believe – it is their religion,” Hegseth told viewers. They want to fight the weather, the rest of us want to deal with real threats that want to take away our freedom.”

Hegseth then credited President Trump with “destroying ISIS,” while acknowledging there are still “remnants” that need to be addressed. “That’s taking on a real threat directly.”

“Whether it’s hot or cold, the enemy is here, as far as liberals are concerned. It’s all about control for them. That’s why climate change is the perfect enemy. They get to control your life to deal with it, no matter what’s happening,” said Hegseth, who once said “germs are not a real thing,” while bragging he has not washed his hands in ten years

The highly-respected website Just Security, which is based at the Reiss Center on Law and Security at New York University School of Law, last year reported that climate change “is a grave threat to national security. Indeed, it may be the threat.” They added it also “exacerbates and accelerates already existing threats.”