'It will be bad': Columnist says Trump has a 'dream team' of incompetence that will make any recession worse 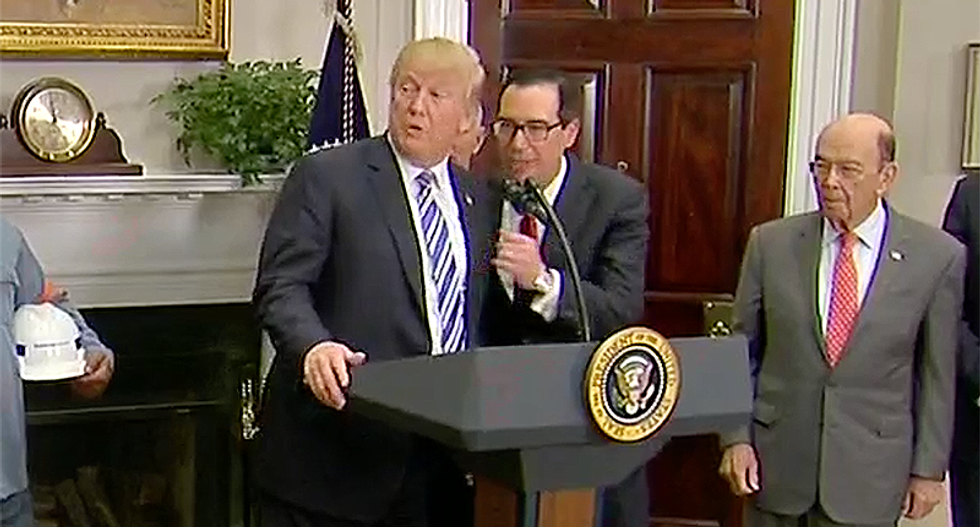 On Thursday, the Washington Post's Catherine Rampell wrote a dire column warning that, if a recession happens on President Donald Trump's watch, it is likely to be particularly bad — because his team is doesn't have the knowledge or competence to guide America through an economic downturn.

"Trump seems to be worried about getting blamed for what is coming. For months, he has been setting up the Federal Reserve as a scapegoat — including for market swings caused by his own foolish trade wars. When stocks go up, Trump claims full credit; when they go down, it’s the Fed’s fault. Personal responsibility and all that," wrote Rampell. "My view on what he (and the rest of us) should be fixed on is slightly different. If indeed we have a downturn, Trump might or might not be the cause; the exact triggers of recession are often hard to pinpoint. But you know what would unequivocally be his fault, rather than fickle fortune? A badly mismanaged recession. Which seems inevitable if, indeed, recession strikes."

Among Trump's economic team, Rampell noted, is National Economic Council Director Larry Kudlow, whose sole skill of communicating to financial markets "has been rendered moot ... by Trump’s inability to settle on any consistent message worthy of communicating," and trade adviser Peter Navarro, who "could not name a single other economist who agreed with his views on trade" and "suggested the Wall Street Journal editorial page sounded communist."

Treasury Secretary Steve Mnuchin is little better, wrote Rampell. "Bankrolling 'Suicide Squad' and other movies — whatever their artistic merits — and earning the coveted title of greatest sycophant in Cabinet history bear little relevance to rescuing the world from economic crisis." Furthermore Mnuchin's department is hamstrung by critical vacancies, and his head of the Council of Economic Advisers doesn't have a background in economics.

And as if that weren't enough, wrote Rampell, Trump has critically undermined the Fed's power to move markets by bullying them over interest rates, and his gigantic tax cut for billionaires leaves little room for fiscal stimulus.

"Trump — like the rest of us — had better hope and pray that we don’t have a recession anytime soon," concluded Rampell. "Because if we do, it’s gonna be bad."