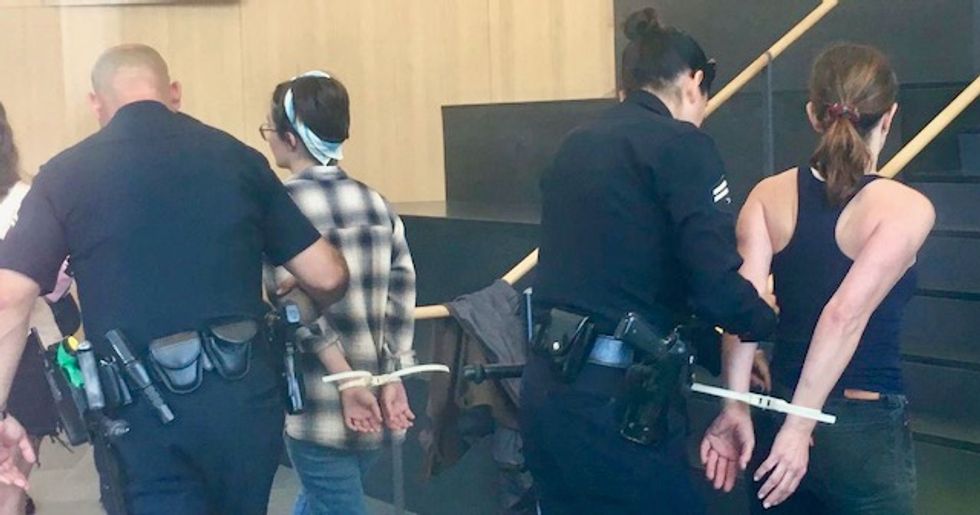 After protesting in the lobby of the GEO Group's Los Angeles office for about five hours Monday, Jewish activists with the grassroots group Never Again Action were arrested. (Photo: Never Again Action/Twitter)

"No 'business as usual' for the companies, politicians, or anyone assisting ICE & Trump carry out their white supremacist agenda."

Jewish activists were arrested Monday for protesting at the Los Angeles office of the GEO Group, a private prison company that runs federal migrant detention facilities decried by critics as "concentration camps."

The grassroots group Never Again Action has organized events across the country in recent weeks—from New Jersey to Washington, D.C. to Chicago—to protest against the Trump administration's immigration policies and how agents with U.S. Immigration and Customs Enforcement (ICE) and Border Patrol treat asylum-seekers and other migrants, particularly those who enter the country at the Southern border.

In a Facebook event description for Monday's demonstration, the protest organizers detailed what motivated their protest:

Children are being separated from their families at the border and imprisoned in concentration camps. ICE raids are increasing in frequency and severity, instilling fear and terror into immigrant communities. People are dying at the border as they flee for their safety. Cherished members of our local community are being rounded up outside of their homes, in their cars, at their workplaces. We refuse to wait and see—we know from history what happens next.

Organizers also highlighted the GEO Group's contracts with ICE, pointing out that the Adelanto Detention Facility—which the corporation runs for the U.S. government—is located just outside of Los Angeles. "We can't ignore it," said organizers. "As a country, as a community, we have to stand up and declare that we will not allow this to happen any longer."

"That's why we're showing up on GEO Group's doorstep. Because people are suffering and dying, and the owners of GEO Group don't care as long as their bottom line is safe. Because it's clear that our leaders and officials won't stop it," organizers added. "Join us to tell GEO Group that never again means never again, and that the public demands they CLOSE THE CAMPS."

Never Again Action wrote in a tweet Monday that Jewish activists targeted the GEO Group's office because the company "runs concentration camps, and when six million of our family members died we swore we wouldn't let that happen again to anyone."

The group livestreamed the action from both inside and outside the GEO Group's L.A. office:

"No 'business as usual' for the companies, politicians, or anyone assisting ICE & Trump carry out their white supremacist agenda," Never Again Action tweeted.

According to reports from the scene, protesters chanted "close the camps" as police began making arrests a few hours after the demonstration began. Never Again Action tweetedMonday afternoon that after shutting down the building for about five hours, the last group of demonstrators from the lobby had been arrested and removed by police.

Participants and supporters of the protest shared updates on social media with the hashtags #JewsAgainstICE and #NeverAgain:

At Geo Group’s LA office with @NeverAgainActn where over a dozen people are inside the building risking arrest bloc… https://t.co/jsTkz8pbBQ
— Natalie 🌅 (@Natalie 🌅) 1565022639.0