‘Love this guy’: Franklin Graham praises mayor for having ‘a lot of guts’ after he attacked LGBT people 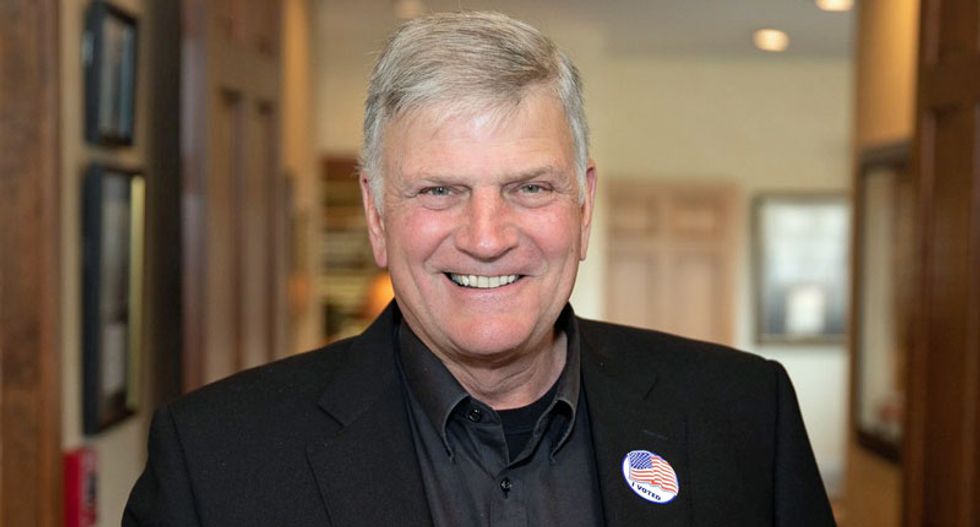 Evangelical empire scion Franklin Graham has made attacking LGBTQ people a core principle of his self-styled “ministry,” aka Facebook. After New Jersey Mayor Alfonso Cirulli delivered an 11-minute anti-gay screed during a township committee meeting Graham took to social media to praise the Republican for calling the LGBTQ community “an affront to almighty God.”

“Love this guy—he’s got a lot of guts!” Graham told his nearly 8 million followers on Facebook.

Mayor Cirulli told elected town officials he opposes the state’s new law that requires schools to teach students about the contributions LGBTQ people have made to society.

“We’ve crossed over the line into absurdity,” Cirulli said. And he urged residents to vote state lawmakers out, saying, “no group has a right to force others to comply with their beliefs, deprive them of their First Amendment rights, and strip them of their parents of how to morally raise their children.”

“In the world we live in,” Graham wrote, “the truth of God’s Word many times isn’t received well. But that shouldn’t stop us from standing with God’s teachings from the Bible. Pray for Mayor Cirulli—and pray that this state mandate will be reversed.”

Graham has been preaching his version of the anti-gay gospel for years, but in recent times many have grown sick and tired of his ministry of hate.

After telling Democratic presidential candidate Pete Buttigieg to “repent” or suffer “eternal damnation” for marrying his husband, Graham’s hometown newspaper’s editorial board made clear where it stands.

“It’s been a little while since Franklin Graham offered up a shovel of moral manure,” The Charlotte Observer’s editorial board wrote in “The gloriously growing irrelevance of Franklin Graham.”

They called his attack on Buttigieg “a typically ripe bite of bigotry from Graham,” and said his “perspective on homosexuality has been pushed to the fringe.”