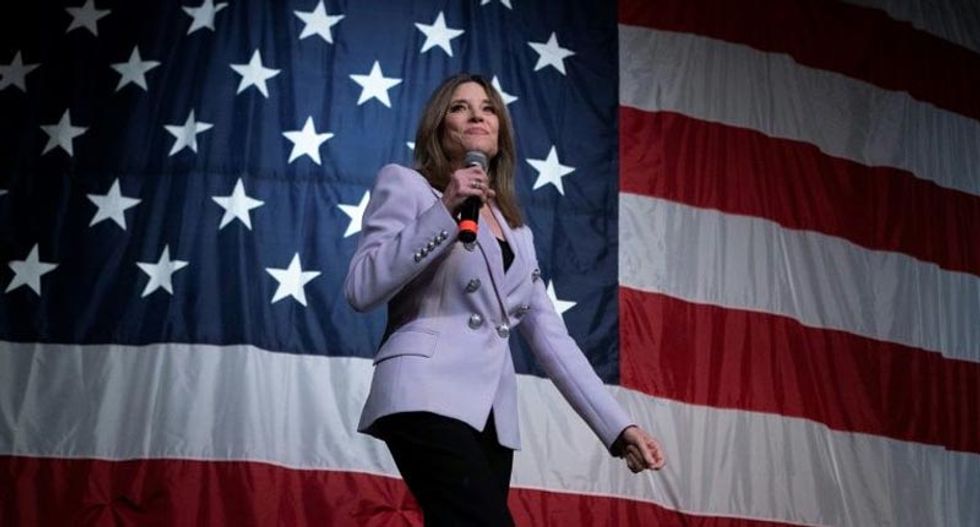 Self-help and spirituality author Marianne Williamson, a Democratic presidential hopeful, says it will take an uprising of consciousness to defeat President Donald Trump at the ballot box in 2020 (AFP Photo/ALEX EDELMAN)

Bill Clinton felt your pain. Barack Obama assured that yes, we can. And for Marianne Williamson, the spiritualist author leading a notable but surpassingly longshot US presidential bid, love conquers all.

Remote as her 2020 prospects may be against two dozen other Democrats in the race, Williamson hopes a moral "uprising" will lead American voters to reject President Donald Trump and help usher in a new era of national healing and compassion.

Williamson has warned that Trump is wielding a megaphone to broadcast his white nationalism, an accusation echoed by several Democratic candidates.

They warn his toxic rhetoric has deepened divisions, fuelled ethnic animus and coarsened the culture.

The antidote -- or at least an opposing force -- is empathy and love, and the candidate offering the clearest distillation of such a politics of the heart is Williamson, the self-empowerment advocate and sometime Oprah Winfrey advisor who, despite her low polling numbers, resonated late last month on the debate stage.

Some analysts have called Williamson's campaign a spiritual crusade.

Others dismiss it as piffle, a series of poorly prepared platforms which at their core feature her self-help incantation that individualism and personal will can solve intractable issues.

In an interview with AFP at a recent Democratic candidate dinner in Iowa, she described her campaign as a challenge to reclaim "moral leadership" after two years of a president treating Americans with contempt.

Neutralizing Trump's toxic rhetoric is key, but Williamson believes Americans in general are at a crossroads.

"We need to talk in deeper truths," the 67-year-old said.

"If we don't get deep and we're not getting real, I don't think it will inspire the kind of revolutionary fervor we need in order to win" next year's election.

Like Trump, Williamson never before ran for public office, but used her personal celebrity as a stepping stone to politics.

Also like the president, she eschews wonkiness, engaging on the personal tableau instead of more policy-driven discussions favored by Democratic rivals such as Elizabeth Warren.

Williamson believes in the ability of "self-actualization" to improve one's personal circumstances, much like Trump, whose faith in his own grit and determination has helped propel his success.

In Trump's era, Williamson has called for nothing less than the transformation of US politics.

"You do it by starting over, not with politicians who themselves have taken tens or hundreds of thousands of dollars from those same multinational corporate forces," she said, jabbing fellow Democrats who have accepted campaign contributions from big business.

"This is the time in America for the people to step in with a new conversation."

"When you have millions of American children who are living in chronic trauma, and you're simply normalizing their despair, love means you set up what I want, which is a department of children and youth," she said.

Addressing gun violence and mental health are top priorities for Williamson, as is comprehensive structural reform.

"We have to deal with the moral rot that has come about because of an amoral economic system that has hijacked our government," she said.

Last month, Williamson spoke with the conviction, passion and clarity of an American soothsayer as she savaged not just Trumpism but the inability of Democrats to tap into the frustrations everyday Americans have about economic and social injustice.

"This is part of the dark underbelly of American society: the racism, the bigotry and the entire conversation that we're having here tonight," she said at the Detroit debate after her rivals clashed over policy details.

"If you think any of this wonkiness is going to deal with this dark psychic force of the collectivized hatred that this president is bringing up in this country, then I'm afraid that the Democrats are going to see some very dark days."

Williamson has written 13 books addressing what she calls "the principles that cause people's lives to change," and her goal is to expand the concept to the national stage.

"All that a country is is a collection of people. So, the same principles that cause one life to change cause a country to change," she said.