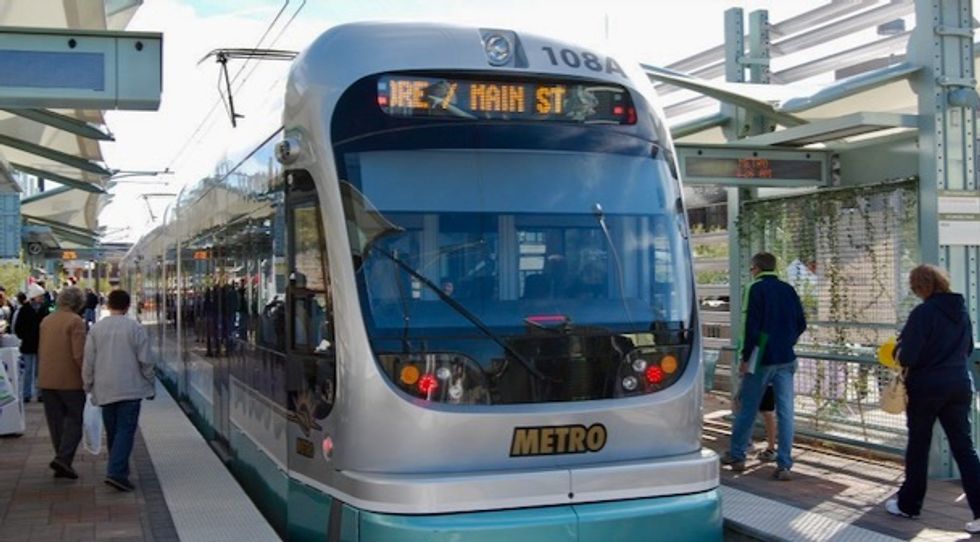 Voters in Phoenix rejected a measure, backed by a group affiliated with the Koch Brothers, that would have banned any expansion of the city's light rail system. (Photo: Paul Martinez/Flickr/cc)

The city of Phoenix dealt a decisive blow to a Koch Brothers-backed measure on Tuesday when voters rejected a proposition that would have banned any expansion of the city's light rail system.

Proposition 105, which was partially drafted by the head of a Koch-funded non-profit, would end expansion of the public transit system that was built in 2008 and prohibit any future building-out of the system, which serves 50,000 residents each day in one of the United States's fastest-growing and least sustainable cities.

The proposition was rejected by 62 percent of voters. The defeat will allow the city to expand the light rail to lower-income neighborhoods populated by many black and Latinx Phoenix residents. Proponents say the growth of public transportation will help cut down on the city's high levels of air pollution and carbon emissions while making the city center more accessible to marginalized communities.

Phoenix just said yes to the future. For those following the Koch-backed ballot measure to kill light rail in the c… https://t.co/JeJDbhNikT
— Alissa Walker (@Alissa Walker) 1566964316.0

Local and national observers applauded the effort to defeat the measure after the Arizona Free Enterprise Club, a non-profit which is backed by Americans for Prosperity and other Koch-funded organizations, became involved in supporting Proposition 105, aiming to divert money to road projects.

Scot Mussi, president of the group, donated $40,000 to the movement to pass the ban and spearheaded efforts to get the question on the ballot. He told local reporters in July that the project would involve "rampant cost overruns" funded by taxpayers and drafted the language in the bill which went further than simply banning the recently-proposed expansion to lower-income neighborhoods—prohibiting light rail growth entirely.

Groups affiliated with David and Charles Koch, who made billions of dollars funding fossil fuel projects and together contributed $127 million to groups that deny the climate crisis up until David's death on August 23, have also shut down efforts to build public transportation in Nashville; Little Rock, Arkansas; and other cities across the country in recent years. The anti-public transportation moves are part of an effort on the part of the Koch family to keep the country reliant on the fossil fuel industry while climate action advocates push for a shift to sustainable infrastructure and energy sources.

The defeat of Proposition 105 served as a blow to the powerful, deep-pocketed network the Kochs have established as the family invests in climate-warming fossil fuels, and those who worked to stop the measure's passage called on residents to remain wary of efforts to threaten sustainable, forward-looking infrastructure projects.

"This is not the first time that outside influences have sought to mislead Phoenix voters—and I doubt it will be the last," tweeted Mayor Kate Gallego Tuesday night. "We are a diverse city made up of residents willing to fight for our future and who refuse to let our trajectory be dictated by anyone other than Phoenicians."

"We will have to step up to protect PHX again in the future but we should be encouraged that, together, we continue to move forward," she added.