Pro-Trump 'Straight Pride' and counter-protesters face off in Boston 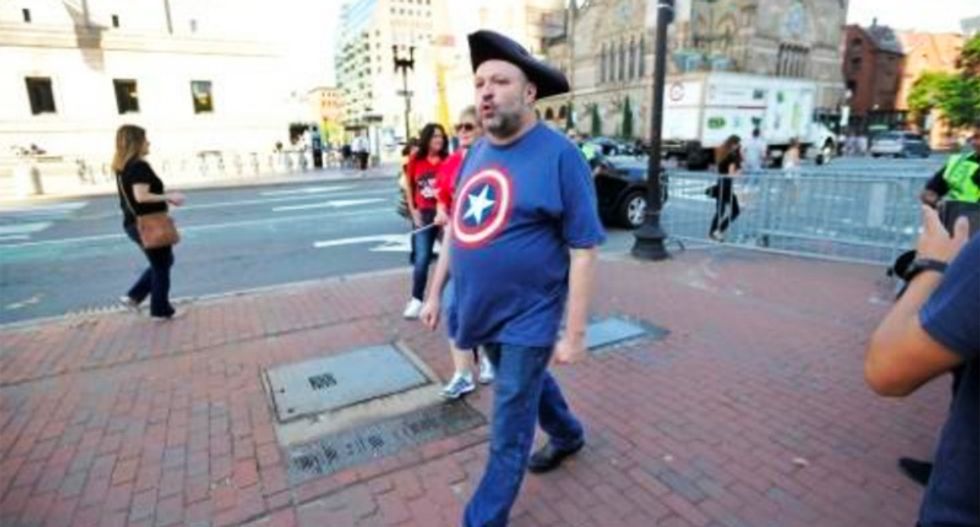 As the hundreds-strong processions ended outside City Hall in one of America's most liberal cities, people from the two camps stood close enough to yell in each other's faces and in a few instances threw coffee cups and soil at each other. But there was no serious violence.

Police with batons and gas masks stood by in formation, ready to snuff out any trouble.

A couple of counter-demonstrators scuffled with police and threw dirt and eggs at them. One protester was seen being detained.

A group calling itself Super Happy Fun America organized the "Straight Pride" parade in response to the hugely popular gay pride parades that take place in US cities every year.

Critics say the "Straight Pride" organizers are white-supremacists whose intent is to bait members of the LGBT community in Boston.

The marshal of the "Straight Pride" rally was Milo Yiannopoulos, a prominent and provocative member of the far-right movement in America who has been banned from several social media sites. He also happens to be gay.

"My fellow homosexuals have been embarrassing me for decades," he told AFP. "Finally I found my crowd."

"Honestly, as a gay man, I have been embarrassed and attacked by my fellow homosexuals for most of my life, and these people feel like home."

He added that he stands for traditional Christian family values -- "even if I don't always live them."

Rachel Domond, an organizer of the counter-demonstration, said she turned out to "stand up against this hatred that is here in Boston, and nationally."

Trump's rise, she told AFP, had made people like the white supremacists feel "empowered to say those statements and be more public about it."

The demonstrations came as tensions simmer between leftists and white nationalists across the United States.

Two weeks ago, a far-right rally and counter-demonstration by anti-fascist protesters in the city of Portland, Oregon passed with no major incident amid a heavy police presence.

It quotes the group's president, John Hugo, as describing heterosexuals as "an oppressed majority."

Massachusetts was the first US state to legalize same-sex marriage.

But the parade had a clear political slant too, as participants walked alongside pro-Trump floats. The group's website displays a doctored photo of Trump holding a sign saying #GreatToBeStraight.

Enrique Tarrio, a leader of the all-male "Proud Boys" organization, which has been designated a hate group by the Southern Poverty Law Center, is also due to attend.

A "Straight Pride" rally held last Saturday in Modesto, California attracted only a few dozen people and about 250 counter-protesters, according to local newspaper The Modesto Bee.