Subsidizing underfunded schools, US teachers spend $459 of their own money each year on classroom supplies 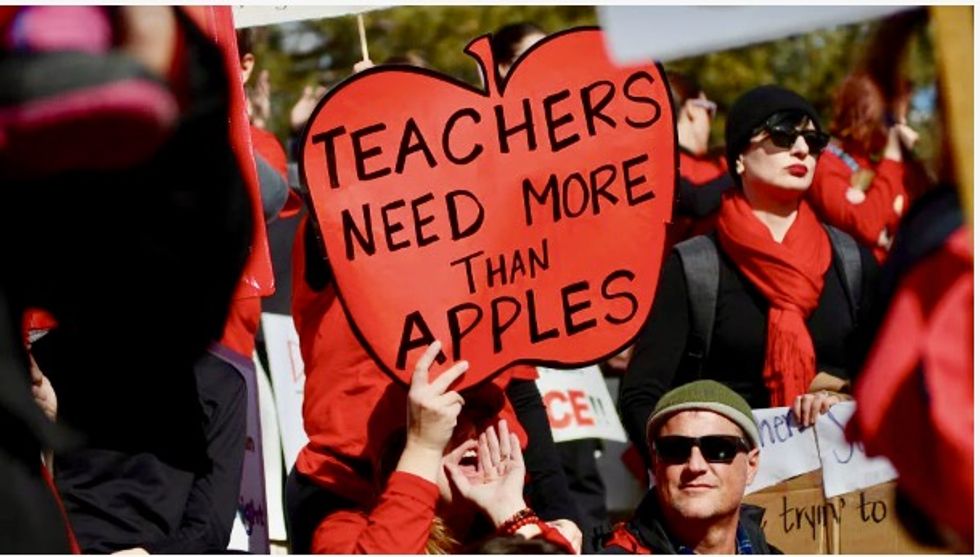 Union leader responds to new analysis with vow that educators will continue "to fight to fund our future, to fight the defunding and underinvestment that created this crisis in the first place."

As students, parents, and educators enter the start of a new school year, the think tank Economic Policy Institute published an analysis Thursday that American K-12 public school teachers spend an average of $459 on classroom supplies for which they are not reimbursed.

"There is no other profession I can think of where workers, as a matter of culture and practice, are relied upon to subsidize an employer's costs just so they can do their jobs."—Randi Weingarten, AFT"This figure does not include the dollars teachers spend but are reimbursed for by their school districts," EPI economist Emma García wrote in a blog post. "The $459-per-teacher average is for all teachers, including the small (4.9 percent) share who do not spend any of their own money on school supplies." 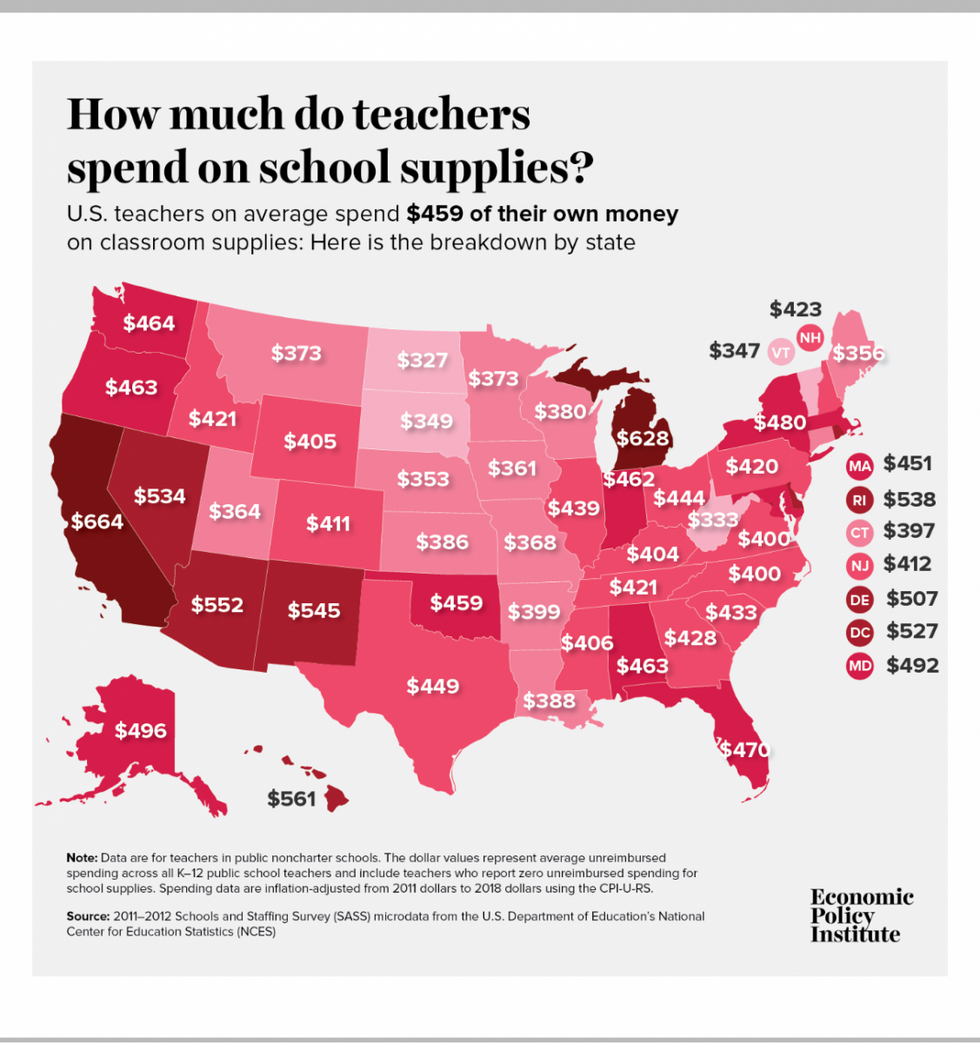 "This variation should not be interpreted as a variation in teachers' altruism," García noted. "State-by-state spending differences are likely due to a combination of factors, including students' needs, how schools are funded in the state, the cost of living in the state, and other factors."

"We know that the figures in the map are not an atypical high driven by the Great Recession because the 2011–2012 spending levels are lower than spending levels in the 2015–2016 NTPS data," García explained. "The figure after the map shows that teachers' unreimbursed school supply spending has actually increased overall since the recovery." 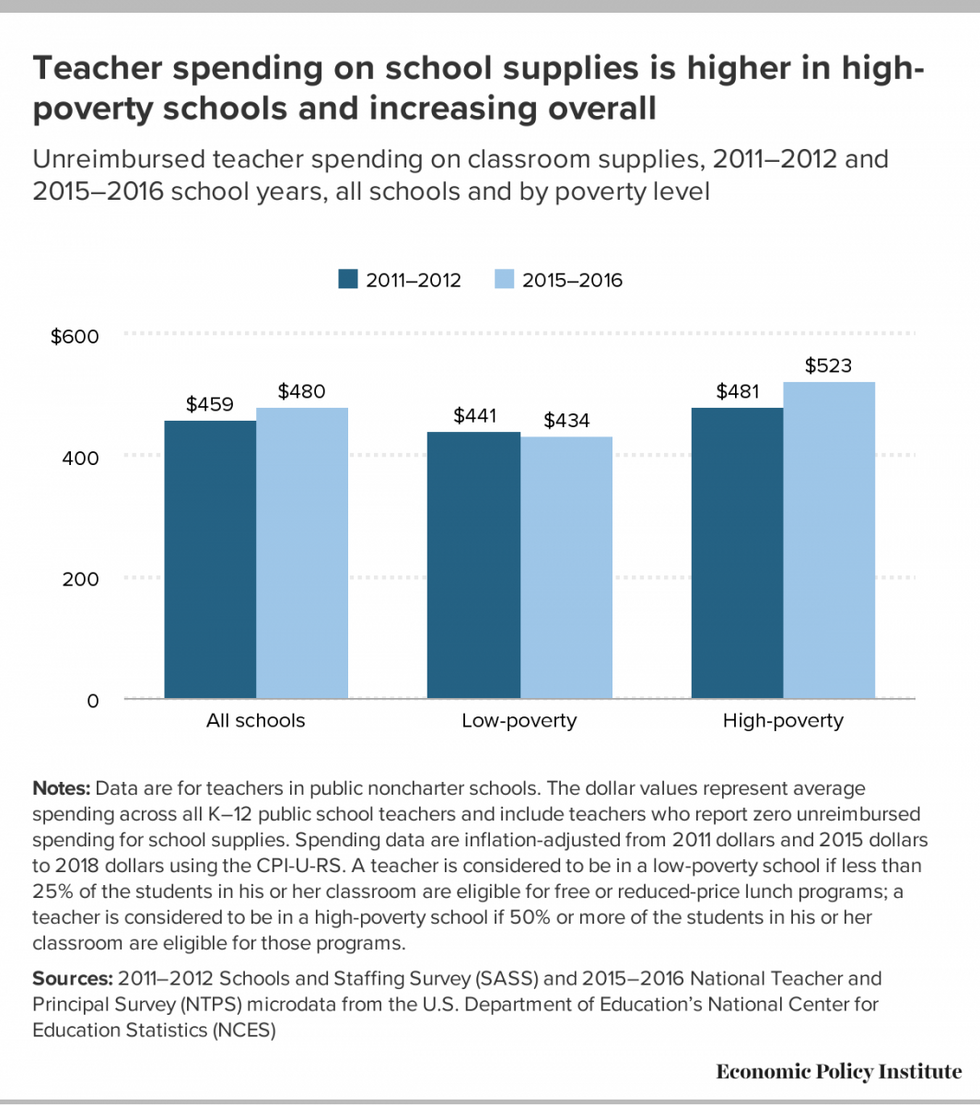 Responding to EPI's report in a statement Thursday, American Federation of Teachers president Randi Weingarten said that "there is no other profession I can think of where workers, as a matter of culture and practice, are relied upon to subsidize an employer's costs just so they can do their jobs. But teachers want what kids need, so each year they buy hundreds of dollars' worth of supplies for their students without a second thought—even though they are paid over 20 percent less than similarly skilled professionals."

"Teachers care deeply about kids' learning and about creating safe and welcoming environments in their classrooms. They know that when there's no chalk or crayons, or tissues, or textbooks, when families are struggling to provide necessities, educators plug the gap," she added. "That's not to say it's right. But as long as their kids lack the essentials, educators will continue to dig deep. And they'll also join together to fight to fund our future, to fight the defunding and underinvestment that created this crisis in the first place."