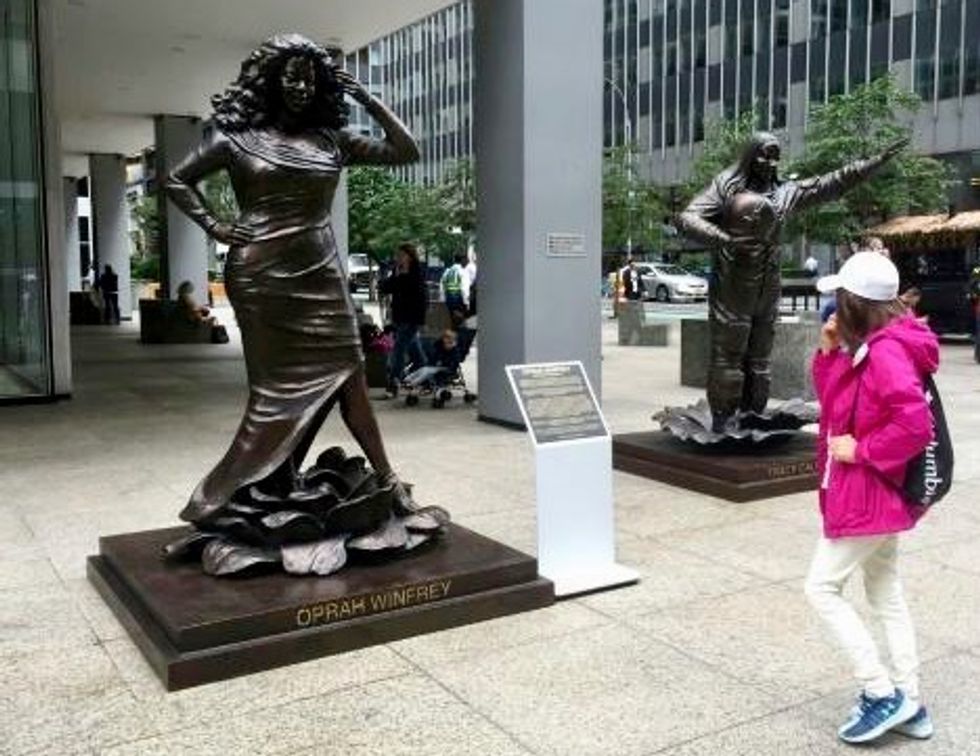 Ten statues of famous women were installed in New York this week as the first part of an international project by Australian artists to highlight gender imbalance in monuments.

Media mogul and talk show queen Oprah Winfrey, Oscar-winning actress Cate Blanchett and three-time Olympic gold medalist Gabby Douglas were among the personalities chosen by the public to be carved in bronze.

The statues, which stand around 6.5 feet (two meters) tall, are the work of husband-and-wife sculpting duo Gillie and Marc Schattner, who want women to be fairly represented in public art.

"It's gorgeous!" said 46-year-old Leslie Daniels as she stopped to look at the installation on Manhattan's Sixth Avenue near Rockefeller Center.

"We women are great contributors to society and they just overlook us. It is uplifting to see this," she added.

The statues, unveiled on Monday to mark Women's Equality Day, feature inspirational women from different walks of life. They are mostly American and were nominated online.

Astronaut Tracy Dyson, the singer Pink, actress Nicole Kidman, and transgender author and activist Janet Mock are among those striking a powerful pose on a flower of their choosing.

"I think it's great," said 42-year-old Corinne Gudovic from Chicago as she eyed the statue of Goodall.

"I wasn't extremely sure what it was for at first but I'm always for women's empowerment and anything that demonstrates that is a good thing," she added.

Only five out of New York's 150 public statues are of women, according to the city's government. New York Mayor Bill de Blasio has committed to building more.

The Schattners plan to put up sculptures in other countries as well, including Australia and Britain, and are welcoming nominations on their website.