The US shooting victims: what we know 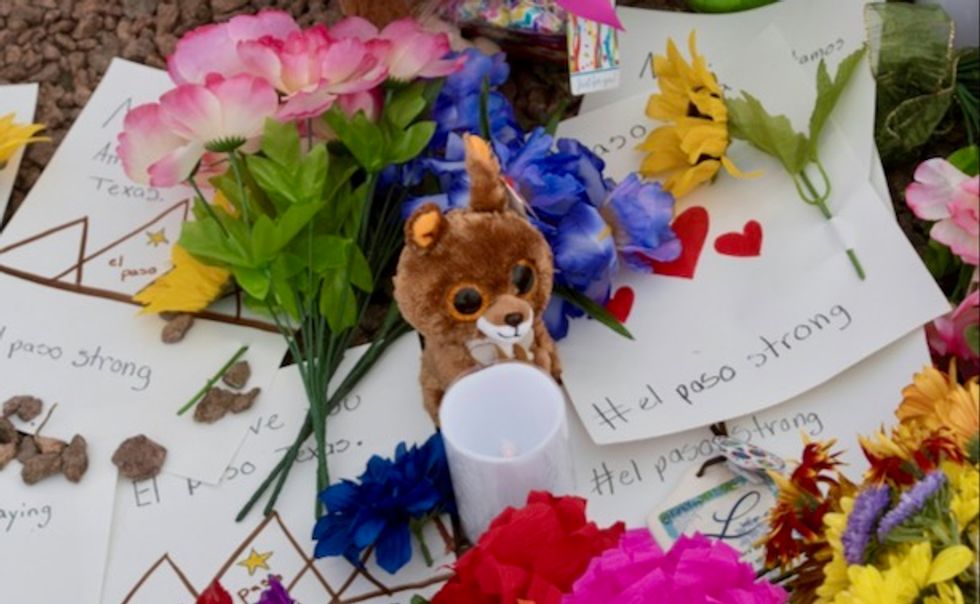 Messages and flowers at a makeshift memorial honor the El Paso shooting victims, who include grandparents shopping with their grandchildren, a mother protecting her newborn, and at least seven Mexican nationals AFP / Mark RALSTON

A hero mother shielding her infant, Mexican nationals shopping just across the border, a 15-year-old soccer player: details began to emerge Monday of the 31 victims of back-to-back shootings in Texas and Ohio -- and the stories behind the grim statistics.

In many ways the victims are a cross-section of America: grandparents shopping at an El Paso Walmart and young adults enjoying a late night out with friends in Dayton.

Angie Englisbee, 86, was in the Walmart check-out line when she was killed, CNN reported, while 25-year-old Thomas McNichols, a father of four described as a "gentle giant" by his aunt, was gunned down in the Ohio attack, according to the Dayton Daily News.

There were stories of narrow escapes too. Norma and Memo Garcia were both wounded in the shooting near the front of the Walmart as they raised money for their child's sports team.

Their two children, ages five and 11, were inside the store and not injured, The Dallas Morning News reported.

Jordan Anchondo, a mother of three, was one of at least 22 people killed in El Paso. She reportedly died protecting her two-month-old son from the hail of bullets.

Her husband Andre Anchondo was also killed, as the three were shopping for school supplies.

AFP / Mark RALSTON People hold up their phones during a prayer and candlelight vigil after a shooting left 22 people dead in El Paso, Texas

"How do parents go school shopping and then die shielding their baby from bullets?" Jordan's aunt, Elizabeth Terry, told CNN.

Another victim being praised for his heroic action is 63-year-old David Johnson, who was shopping at the Walmart with family.

Niece Maria Mia Madeira said on Facebook that Johnson shielded his wife and nine-year-old granddaughter when the shooting started.

"He protected them from that murderer," said Maria Mia Madeira.

Sara Esther Regalado and her husband Adolfo Cerros Hernández, residents of the border city of Ciudad Juarez, were shopping at the Walmart when they were killed, according to Mexican media.

There were conflicting accounts of the number of Mexican fatalities, with the country's foreign minister putting the figure at eight, while police said seven were killed.

Elsa Mendoza Marquez, a teacher from Ciudad Juarez, was also shopping at the store where her husband and son were waiting for her when she was killed, the website Milenio reported.

Javier Amir Rodriguez, just 15 years old, died in the El Paso rampage, according to his aunt Elvira Rodriguez. He was a member of the local Express FC youth soccer club.

When Elvira and other relatives did not find Javier at reunification centers in the city, she took to social media seeking help.

Javier, the youngest fatality so far identified, was a promising 10th grader at Horizon High School.

AFP / Megan JELINGER Two women embrace at a vigil for victims of a shooting in Dayton, Ohio that left nine people dead and around 30 wounded

Lois Oglesby, 27, was celebrating one of her first nights out since returning from maternity leave when she was shot in the massacre in Dayton, Ohio, one of a total of nine people to die in that shooting.

A mother of two, Oglesby worked at a daycare and was in nursing school preparing for a career where she could draw on her love for children.

Close friend Derasha Merrett said she learned of the horrible news from a friend on the telephone.

"We grew up in the same church, on the same drill team. She works at my kids' daycare," Merrett told The Atlanta Journal-Constitution, which published a photograph of a smiling Oglesby holding her baby and standing next to a girl believed to be her daughter.

"We all grew up in this little town. We're all family. We're all hurting behind this."