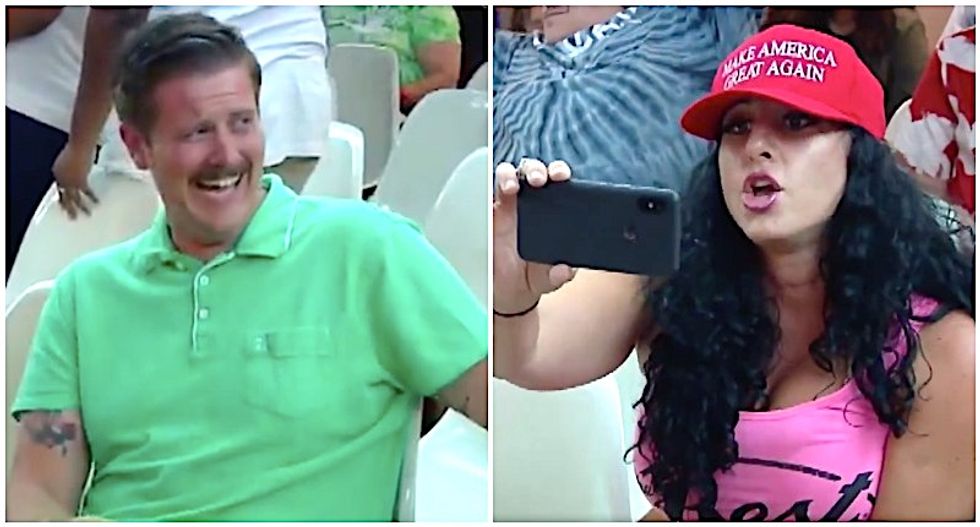 A pair of Trump supporters were laughed out of a Tucson City Council meeting after ranting about immigrants.

The man and woman, who were each wearing hats proclaiming their support for President Donald Trump, interrupted a meeting Tuesday as City Council members passed a voter-sponsored initiative to designate Tucson as Arizona's first so-called "sanctuary city," reported KVOA-TV.

Voters will decide Nov. 5 whether to authorize city officials and others to enforce immigrant-friendly initiatives that have been in place since 2012, when Tucson designated itself an "immigrant-welcoming city."

The Pima County Republican Party has filed a lawsuit challenging the initiative, and the pair of Trump supporters spoke out loudly against the measure during the council vote.

"The city does not change or divide immigration laws," shouted a woman in a "Make America Great Again" hat, holding a cell phone camera pointed out herself. "That is Congress' job to change immigration laws."

Others in the crowd groaned and jeered the woman, and one man loudly told her to "shut up."

The woman stood up and displayed a hand-lettered sign, as a companion seated next to her grabbed his large fountain drink and other belongings in preparation to leave.

As the woman waved her sign around, shouting "respect our laws," a man seated in the row in front of her breaks into a belly laugh.

A heckler shouts, "You're in direct violation of being a jackass," from somewhere off camera, and a police officer approaches.

Others in the crowd join the laughing man in the green shirt, and the woman continues shouting as the officer escorts her and her soda-sipping companion out of the room.