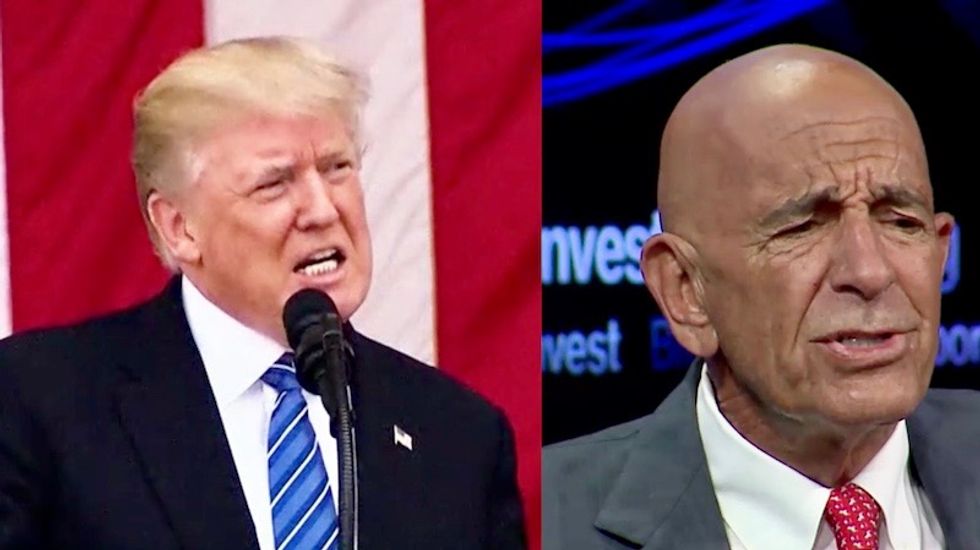 According to a report from Bloomberg, close Donald Trump associate Tom Barrack was taking money from Saudi Arabian interests -- as well as meeting with them -- while he was also employed helping out the president's transition team.

The report states that Barrack -- who is also being investigated for his part in planning the president's inauguration -- was working both sides of the fence in 2016.

Pointing out that "Tom Barrack, the investor and longtime friend of President Donald Trump, was an early advocate of strengthening ties between the White House and Saudi Arabia," Bloomberg adds, "Barrack had pursued business across the Middle East for decades, but he hadn’t done a deal with the massive Saudi fund. That changed after Trump’s 2016 presidential run, a time when Barrack straddled multiple roles -- a leader of Colony [Capital Inc.], a campaign adviser and a key member of the presidential transition team."

"During that time, he also laid groundwork with the Saudis. Those interactions were more extensive than has been previously reported. Barrack jetted to a feast with a prince and also was invited to meet with key diplomats at Treasury, according to people familiar with the matter, whose accounts were supported by flight records and official calendars," the report continues, adding, "Those people added new details about how the relationship developed with the Saudis as well as their allies in the United Arab Emirates. In one example, Barrack flew overseas in December 2016 to feast with the head of the Saudi wealth fund and Mohammed bin Salman, who is known as MBS and was then the deputy crown prince. At the time, Barrack was overseeing Trump’s inaugural planning and weighing in on cabinet appointments."

While it had been previously revealed that Barrack had Saudis dealings, Bloomberg is now reporting, "A new congressional report shows that Barrack attempted to include language in a Trump campaign speech on energy policy that the lawmakers concluded had been vetted by a friend from the U.A.E."

Barrack's dealings with the Saudi's have not ceased, with the report noting that Treasury Secretary Steven Mnuchin was also drawn into his orbit.

"Though Barrack had no formal role in the administration, he remained in demand. That June, he was invited along with representatives from Middle Eastern countries to the U.S. Treasury for dinner, according to calendar entries obtained by American Oversight and not previously reported," the reports states. "The guest list included 24 dignitaries and finance officials. Yousef Al Otaiba, the United Arab Emirates ambassador to Washington and an old friend of Barrack’s, was invited. So was an executive of Thrive Capital, the venture firm managed by Josh Kushner, Jared’s brother. It’s not clear what was discussed."