Trump sycophants who have turned on the president owe Americans more than an apology: conservative columnist 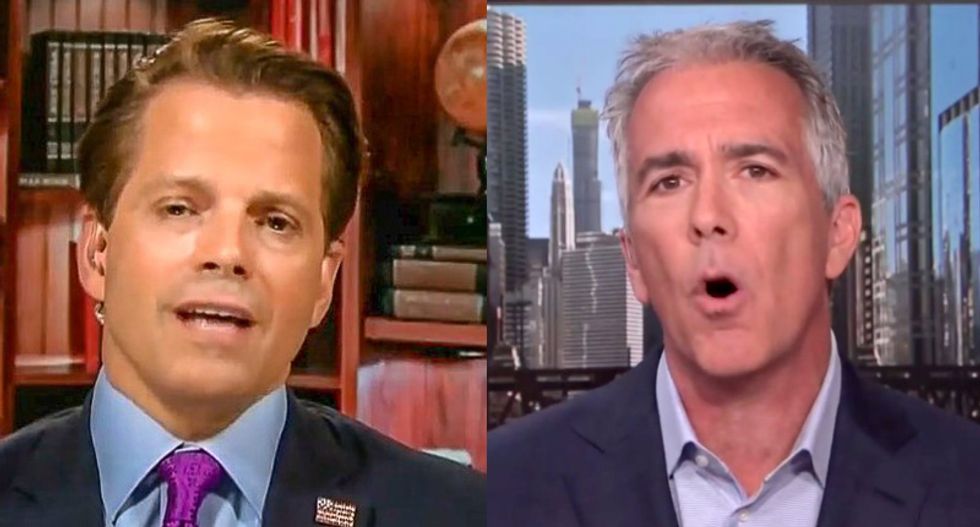 A columnist at the conservative Bulwark lectured former White House Communications Director Anthony Scaramucci and Tea Party lawmaker-turned-rabble-rousing radio host Joe Walsh that they need to do more than apologize for sucking up to Donald Trump now that they have become enemies of the president.

With Scaramucci boasting he is building a coalition of conservatives to oppose Trump, and Walsh going even further and running against the president for the GOP's 2020 presidential nomination, the Bulwark's Robert Tracinski said that is a step in the right direction.

"Shock-jock radio host and former Rep. Joe Walsh gained a lot of attention by announcing a primary challenge to Donald Trump," he conceded, before dryly adding, "I doubt this is because anyone seriously thinks that Walsh—with limited name recognition, no deep pockets, and no large base of support to mobilize—is going to mount a credible challenge for the Republican nomination. But the announcement has been lauded as a high-profile defection by a former Trump booster."

However, the columnist added, that doesn't mean Walsh should be taken too seriously and compared the former GOP lawmaker, who was voted out of office, with the man called the "Mooch."

"My first reaction to such a defection is to say 'more power to him' and welcome the return of sanity, one person at a time. But as in the case of Anthony Scaramucci, Walsh’s chosen form of atonement is self-promotion. You remember The Mooch, right? He was a rider on the Trump bandwagon who managed to weasel his way into becoming the president’s communications director for about five seconds in 2017 before being unceremoniously dumped for shooting his mouth off to a reporter about internal White House squabbling. "

According to the author, the two of them follow a long line of Trump associates who became foes after a falling out with the president.

"This is a well-traveled path. (Remember Omarosa?) The cycle goes like this: an ambitious hanger-on flatters Trump, works his or her way into the inner circle, gets fired and cast out, and eventually pens a tell-all memoir or goes on cable news to call the president names," he explained. "On Trump’s side, it’s also a well-worn routine: he welcomes the new hire with the usual hyperbolic flattery, eventually finds him dispensable, then goes on to tweet about how stupid, incompetent, and treacherous this person is who we would never have heard of if he hadn’t been hired by Donald Trump."

He then quipped: "Basically, the Michael Cohen treatment," alluding to Trump's former personal attorney whose allegiance to the president invited scrutiny -- and then a prison sentence.

"Cases like Joe Walsh and Anthony Scaramucci raise an important question," he continued. "As Scaramucci said, Trump critics need to 'leave room on the off-ramp for those willing to admit their mistakes.' As we get more weeks where suggestions like buying Greenland and nuking hurricanes are the president’s least problematic utterances, more episodes in which Trump displays his dangerous ignorance and impulsiveness—as policies like his trade war reach their disastrous end results—and as he looks increasingly likely to lose the next election—we will need to make room for sincere conversions, and even for some insincere ones."

However, he once again added, opposition to Trump from some of his previously besotted supporters should only go so far when it comes to their public rehabilitation.

"The main principle is that we should be happy to have their votes, but not so willing to give them ours. We should be quick to welcome their support, but slow to accept them back into positions of political or ideological leadership, he insisted before concluding, "We need to let the rats leave the sinking ship—but we don’t need to appoint them as captain of the lifeboat."