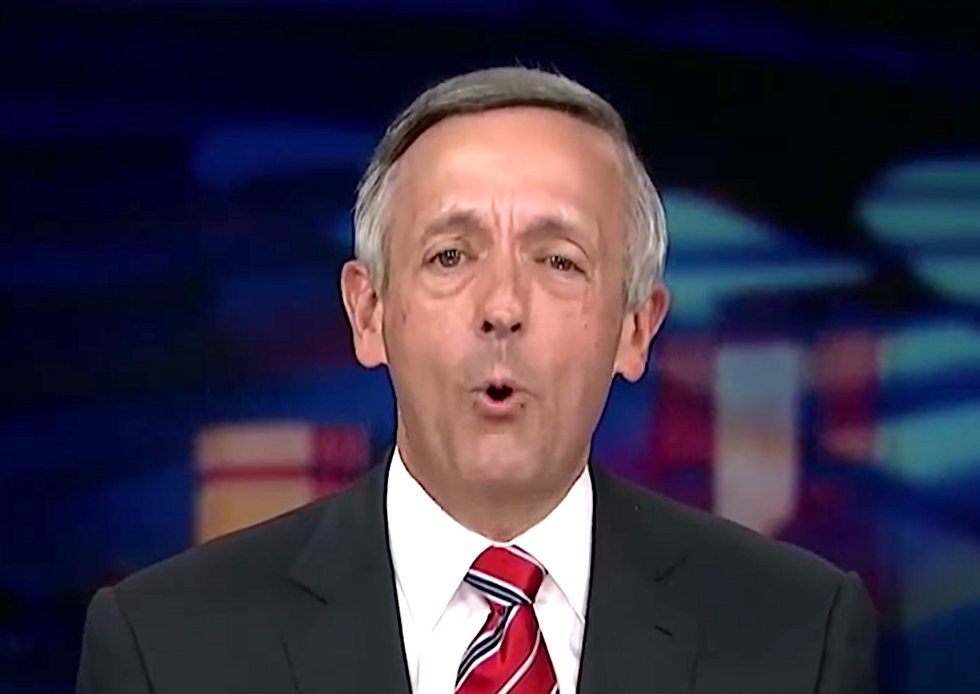 During an appearance on Fox News this Thursday alongside Ethan Bearman of Left Coast News, megachurch pastor and Trump evangelical advisor Robert Jeffress pushed back against skepticism over the "thoughts and prayers" response to mass shootings commonly echoed by religious conservatives, saying that the solution lies in teaching children that God will hold them accountable for their actions.

In the segment which he shared on the YouTube channel for his church, Jeffress argued against the claim that evangelicals aren't willing to find real-world solutions to gun violence, but added that "if we depend upon legislation alone to solve the gun problem, we're going to be sadly disappointed."

Speaking to Fox News host Shannon Bream, Jeffress, who is the pastor of First Baptist Church in Dallas, said "there is a spiritual component" to gun violence that should be addressed "not in place of legislation, but certainly alongside any proposed legislation."

Bream then mentioned a recent op-ed by former Arkansas governor Mike Huckabee, who argued that mass shootings are "never going to end" unless America has a "reawakening of morality and values."

Bearman responded that if that were the case, Western Europe, which is much more secular than the U.S., "would be suffering from far worse mass shootings that we are suffering."

"It's important that we remember that these weapons will kill dozens more people in the time that it took Cain to beat Abel to death with a stone," Bearman said. "We need to remove those weapons from people's hands so we're not killing so rapidly."

Jeffress fired back, saying he's "not arguing that we shouldn't do anything."

"I think we all understand that the Second Amendment has limits to it, just like the First Amendment with free speech does," he continued. "We don’t believe everybody has a right to have a nuclear weapon. We don’t believe that four-year-olds ought to have guns. I’m not arguing against legislation, but I’m saying that one thing we can do is to quit this devaluation of human life in our society that is seen by the glorification of violence in our culture, by the mass slaughter of a whole class of citizens — the unborn, by teaching our children that they’re nothing but an evolutionary accident instead of teaching our children that they are created by God, they are of value to God, and they are accountable to God for their actions."