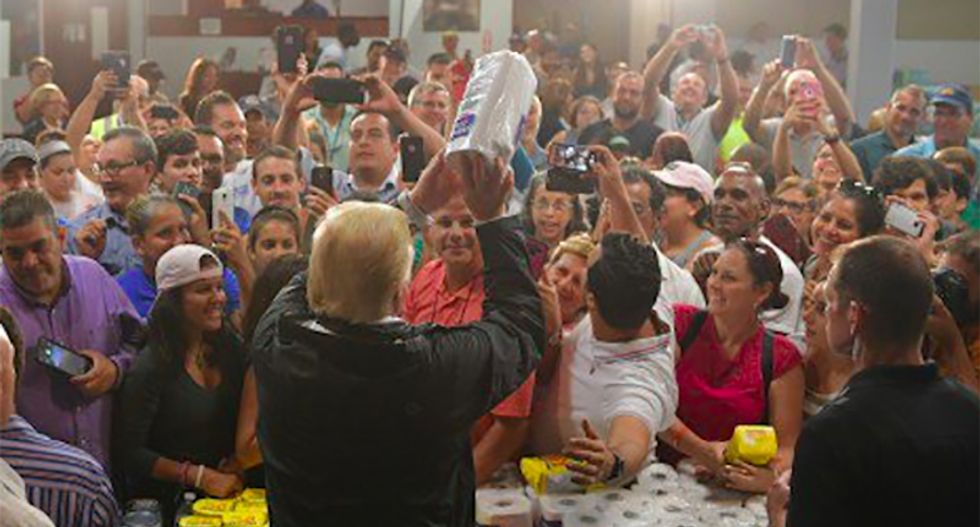 "For far too long, the U.S. government has failed the people of Puerto Rico. That must end."

President Donald Trump is reportedly using Puerto Rico's ongoing political turmoil to place new restrictions on billions of dollars in disaster aid for the island's recovery from the widespread devastation caused by Hurricane Maria in 2017.

Citing anonymous Trump administration officials, the Washington Post reported Thursday that the White House is planning to "impose new safeguards on about $8.3 billion in Housing and Urban Development disaster mitigation funding to Puerto Rico, as well as about $770 million in similar funding for the U.S. Virgin Islands."

"The administration's new plan," according to the Post, "was spurred directly by requests from the president to add additional safeguards on federal aid to Puerto Rico."

Reports of the president's plans come just days after Puerto Rico Gov. Ricardo Rosselló announced he would step down in the midst of massive protests over his corruption and slur-filled text messages that mocked victims of Hurricane Maria, which may have killed nearly6,000 people.

Rosselló is expected to resign on Friday, and it is not clear who will replace him.

Puerto Ricans expressed alarm at the planned restrictions on disaster aid, which could further hamper the island's ability to recover from Maria and prepare for hurricane season, which begins next month.

According to the Post, the $8.3 billion in disaster funding to Puerto Rico "was approved by Congress to protect parts of the island prone to natural disasters, such as by building water pumps where flash flooding occur."

"The crisis on the island should not stall disaster aid," Federico A. de Jesús, principal of consulting firm FDJ Solutions and the former deputy director of the Puerto Rico governor's office in Washington, told the Post. "The money should go directly to the people—with as many safeguards and accountability processes as needed—without slowing the aid down."

In reality, according to the Associated Press, Trump's "number is wrong, as is his assertion that the U.S. territory has set some record for federal disaster aid. Congress has so far distributed only about $11 billion for Puerto Rico, not $91 billion."

Trump has reportedly complained to aides that Puerto Rico has received "too much" disaster relief and said he doesn't want "another single dollar going to the island."

Trump's efforts to stop Puerto Rico aid appears to have been effective. As Common Dreamsreported in June, the island said it had not received $600 million in food stamp aid that was approved by Congress.

"For far too long, the U.S. government has failed the people of Puerto Rico," Sanders tweeted. "That must end today. President Trump must act now to ensure that the federal government is doing everything in its power to fully rebuild Puerto Rico."