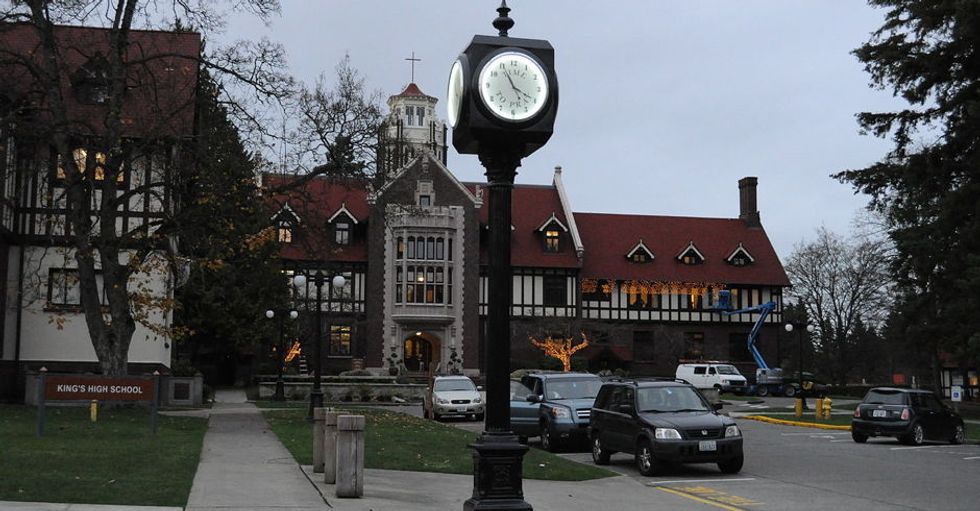 Jacinta Tegman, the new head CRISTA, a massive $100 million Christian ministry in the state of Washington, has been pushing an anti-LGBTQ agenda since taking over in January. She told the organization’s members that “sexual intimacy” must be “confined within the marriage of one man and woman.” Over the summer the head of the organization’s K-12 King’s schools, Eric Rasmussen, sent families and faculty an email “to reaffirm the school’s core values, and repeated Tegman’s line that sexual expression only occurs within a heterosexual marriage,” the Seattle Times reports.

The school now has a textbook that calls homosexuality “unnatural,” and “a result of the failure to worship God.” Both claims are false.

At least five teachers and two students have quit the school as a result of these attacks on LGBTQ people.

And while families may be upset at the loss of the teachers and students, Tegman apparently is not.

“This may not be the place for everybody,” Tegman told the Seattle Times. “So if it’s not, we just want to make that clear so people can make a good decision whether they want to stay.”

Some teachers questioned the email that was sent over the summer. In response, the head of King’s schools responded.

“You can continue to work at King’s if you are a Christian, confirm understanding and alignment with our doctrinal statement and willingly conduct your personal life and professional role of educating our students in a manner that is not in disunity with King’s theological beliefs,” he wrote.

One teacher, Megan Troutman, called working at the school “an amazing experience,” but resigned, saying, “I cannot, in good faith or conscience, teach in a place that creates policies that negatively impact an entire section of the student population.”

“I could not be complicit in a policy that could harm or ostracize any student.”

One student spoke out after deciding to leave.

“Colby Crispeno, 17, agreed” with Troutman. “He attended King’s since preschool, but eventually decided to leave at the end of his sophomore year after coming out to his family as gay.”

“Even as he struggled with depression and anxiety at King’s, he found solace in a family friend who taught there. She too left the school over the summer,” the Times notes.

“You don’t have to accept me or the LGBTQ+ community, but when you’re the head of the school and this decision brings some youth closer to suicide, you lose my respect,” Crispeno said.

CRISTA “runs private schools, retirement communities and radio stations in addition to its international relief work. The schools serve more than 1,300 students, from preschool to high-school,” the Times reports.

Image by Joe Mabel via Wikimedia