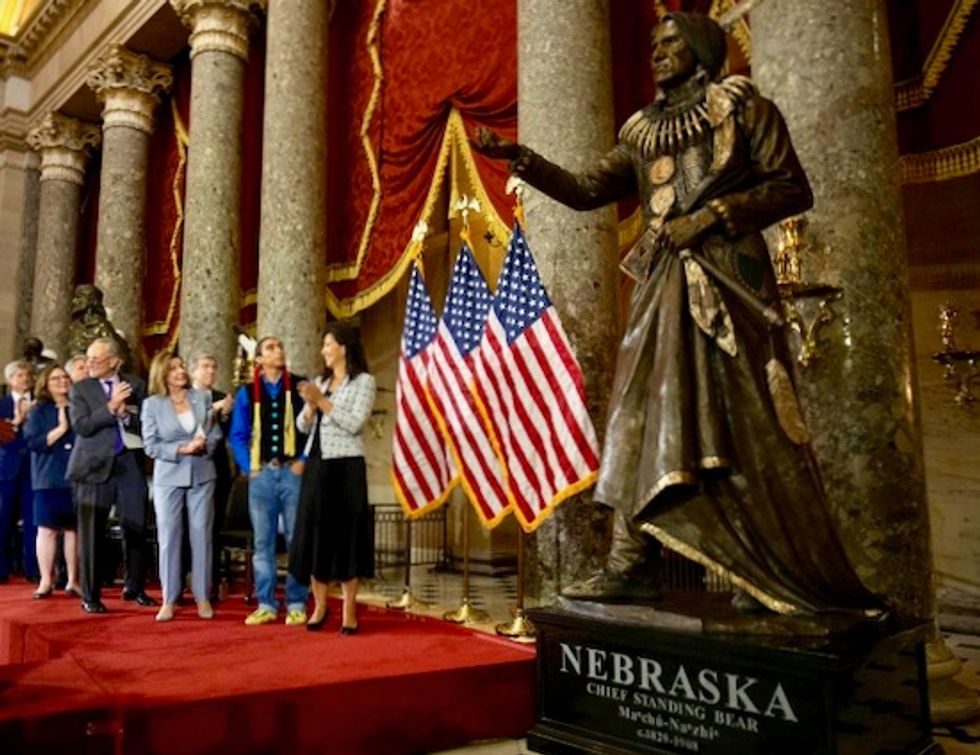 A statue of Ponca Chief Standing Bear, whose reversal of injustice in 1879 against Native Americans made him a national hero, was unveiled in the US Capitol's Statuary Hall by congressional and Nebraska dignitaries AFP / Alastair Pike

Chief Standing Bear, the courageous Ponca leader whose 19th century defense of Native American equality made him a civil rights hero, was honored Wednesday with a statue in the US Capitol.

Some 140 years after Standing Bear's legendary 1879 legal battle -- in which he declared to a judge "I am a man, God made us both" -- a bronze likeness of the chief took its place in Statuary Hall, alongside other American giants like Rosa Parks and Daniel Webster.

The Nebraska-born chief was "one of the most important civil rights leaders in our country that almost nobody knows about, and we hope to be able to correct that today and tell his story," Nebraska Governor Pete Ricketts told a crowd including present-day Ponca elders.

Shortly after the Civil War, Standing Bear's tribe was forced under government order from Nebraska to Indian country in the state of Oklahoma.

He was arrested when he left the reservation to take his dying 16-year-old son to be buried back in his homeland.

In court, Chief Standing Bear rose with his hand outstretched and addressed the judge.

"That hand is not the same color as yours, but if I pierce it, I shall feel pain. If you pierce your hand, you will also feel pain," Standing Bear said in Ricketts's retelling.

"The blood that will flow from my hand will be the same color as yours. I am a man, God made us both."

Chief Standing Bear's defiance made him an icon among Native American, but his feat is not commonly recounted today.

"I'll be honest... I did not know the story," admitted House Minority Leader Kevin McCarthy.

By honoring this hero, "we are building on their solid foundation," McCarthy said of the nation's founding fathers. "We definitely are forming a more perfect union."

A man and woman in colorful native dress carried the US flag and the tribe's flag as the national anthem was played.

A Ponca tribesman with a lone feather in his hair somberly beat a drum as he sang a prayer, and dignitaries spoke of the legacy of Chief Standing Bear, including House Speaker Nancy Pelosi.

"We touch the nobility of another person's life, and we connect to the universal meaning of that person's sacrifice," said congressman Jeff Fortenberry of Nebraska.