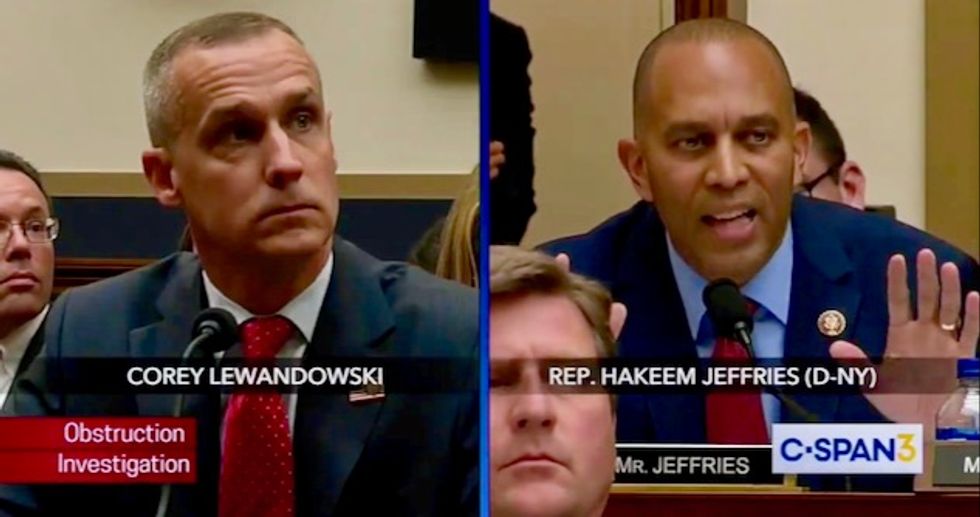 "The American people deserve to know the truth."

A top House Democrat appears to have caught former Trump campaign manager Corey Lewandowski making a statement that differs with a fact in the Mueller report. Lewandowski has spent several hours stonewalling, obfuscating, and doing his best to disrupt the Judiciary Committee on Tuesday in what is the first official House impeachment inquiry hearing.

"You stated earlier today that President Trump asked you to take dictation 'many times.' Is that correct?" Rep. Hakeem Jeffries (D-NY) asked Lewandowski.

"It is," the former campaign manager responded.

"But on page 91 volume 2 of the Mueller report it states, 'The president then asked Lewandowski to deliver a message to [Attorney General] Sessions and said, 'write this down.' This was the first time the president had asked Lewandowski to take dictation.' The first time," Jeffries said, emphasizing the obvious discrepancy in his testimony Tuesday.

"Those are not my words, Congressman, those are the investigator's words," Lewandowski replied.

"Right," Jeffries responded. "Did you lie to Mueller or are you lying to us?"

"OK. You're not really here to tell the truth," Jeffries, who also chairs the House Democratic Caucus, accused. "You are here to participate in a continuing cover-up."

"Russia interfered with this election in sweeping and systematic fashion, the Trump campaign welcomed that assistance at the highest level," Jeffries said, at which point Lewandowski turned his head away. "There were subsequent acts of obstruction of justice with respect to the investigation. The American people deserve to know the truth."

One Vox reporter called it a "demonstrable lie," and Popular.info's Judd Legum says Lewandowski "either just lied to Congress or lied to Mueller."

Democrats should insists on getting the transcript of Lewandowski's interview with Mueller's team to determine whet… https://t.co/LRcEITfPIa
— Judd Legum (@Judd Legum) 1568748121.0