‘Does Jesus not do reality TV?’: Sean Spicer mocked for saying a vote for him is a vote for Christ 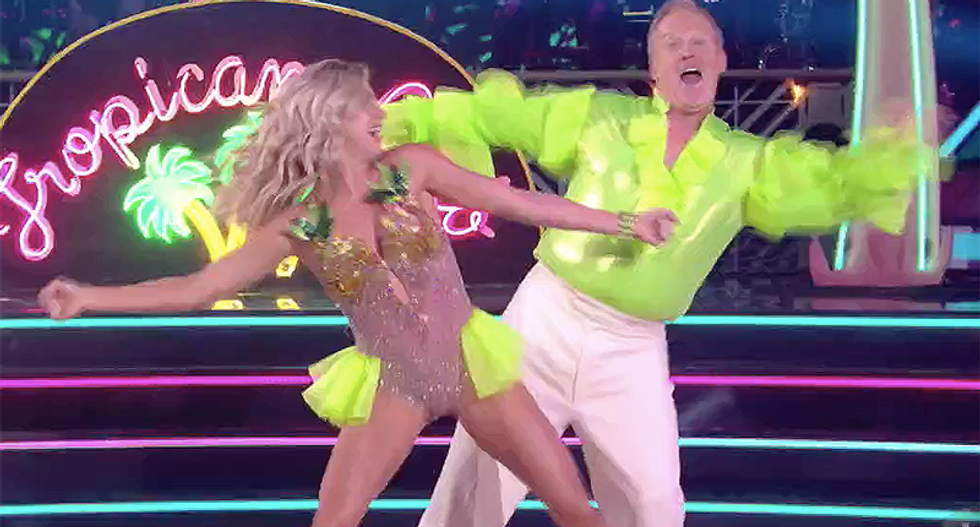 "But if Christ is on your side then wouldn’t you just win? Or does Jesus not do reality television?"

Former Trump White House press secretary Sean Spicer made his premiere performance on "Dancing With the Stars" Monday night, and was widely mocked for his outfit – and his dancing:

And while those can be dismissed as a pathetic attempt to gain attention – and clients for his public relations businesses – his pandering for votes to "own the libs" and to (supposedly) glorify God cannot.

Spicer responded, saying that a vote for him is a vote for Jesus. Literally.

Rather than blame his dancing skills, or lack thereof, Spicer preemptively blamed the judges, and added some religious pandering: "Let’s send a message to #Hollywood that those of us who stand for #Christ won’t be discounted."

“Those who stand for Christ” The ever-pathetic @seanspicer trying to turn his bad dancing into some kind of symbo… https://t.co/EbuodPqTmI
— Soledad O'Brien (@Soledad O'Brien) 1568721444.0

Here's what others are saying too:

@seanspicer @GovMikeHuckabee Wow! Already turned this into an “us (good) versus them (evil )” competition. You people are sick.
— Pedro Gamboa (@Pedro Gamboa) 1568712762.0

Trying to get the Evangelical vote to win Dancing With The Stars is peak GOP bullshit. https://t.co/SnMmp6KByK
— Greg Hogben (@Greg Hogben) 1568721216.0

Sean Spicer suggests the DWTS judges don't like him because he stands for Christ. Hmm. Not that it really matters i… https://t.co/8hTObyVrHi
— Peter Montgomery (@Peter Montgomery) 1568721455.0

What’s even the point of loosening up and having a good time if you can’t bring your bizarre persecution complex al… https://t.co/u8PCTgDYHq
— Jason (@Jason) 1568721469.0

Remember, you biblical scholars out there: A reality show vote for the guy that defended concentration camps is a r… https://t.co/fugGCV8nas
— Mr. Resistor (@Mr. Resistor) 1568722280.0