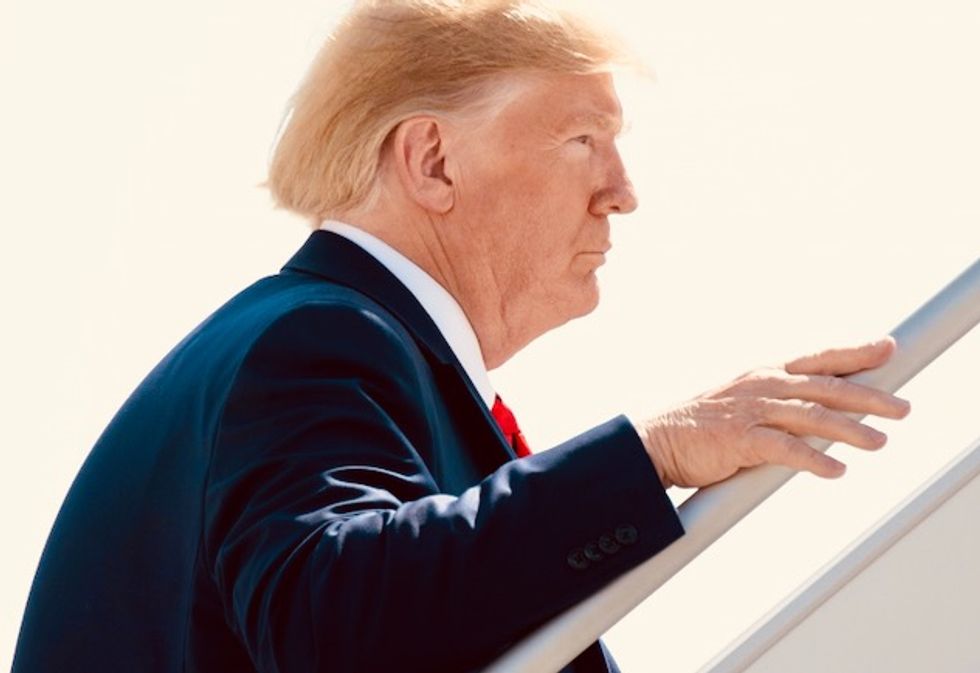 From his New York skyscraper, President Donald Trump should have felt on top of the world. Instead, scandal over his alleged shakedown of Ukraine's president for dirt on an opponent has brought him to the lowest point of his presidency -- and at risk of crashing further.

The former real estate tycoon and reality TV performer returned to Washington on Thursday as only the fourth president to face an impeachment inquiry.

On Twitter, he raged at the "hoax" and "scam." Aides insisted that the story was meaningless.

But in reality, this was the week when Trump was confronted in brutal fashion by the limits of his power, or even his ability to project that power.

Tuesday saw him boasting in front of the United Nations about what he called a historic peak in American military and economic might.

Yet diplomats in the UN hall were all too aware of his meager diplomatic victories and mounting domestic troubles.

The China trade war rolls on. Attempts to force out Venezuela's leftist strongman Nicolas Maduro have failed. North Korea is not giving up nuclear weapons.

Now Trump had a political maelstrom of his own, with Democratic leader Nancy Pelosi announcing the start of a formal impeachment probe on Tuesday -- lighting a rocket under the already explosive 2020 presidential campaign.

New York is Trump's hometown and he travels the Big Apple like a modern-day emperor.

Everywhere he goes, his gargantuan, heavily armed motorcade requires swaths of one of the planet's busiest cities to shut down. Residents become spectators to the sheer potency of the presidential office.

And at night, Trump is escorted to his very own skyscraper. Trump Tower on the corner of Fifth Avenue is a monument to a man who has always believed in, and proclaimed, his greatness.

Yet as the week progressed, the view from that penthouse eyrie became grimmer. The man looking down became angrier.

Few Americans had ever thought much about Ukraine, let alone its new president, Volodymyr Zelensky, who, like Trump, used to work in television entertainment.

Suddenly the allegation that Trump twisted Zelensky's arm to prosecute a corruption case against Joe Biden, the Democratic frontrunner for 2020, made Ukraine practically the only topic of discussion in Washington.

As impeachment talk swelled, Trump agreed to release a transcript of a lengthy phone call he had with Zelensky. He then authorized release of the complaint by the intelligence community whistleblower who'd raised the alarm in the first place.

The White House said these documents killed the story.

"He has nothing to hide," spokeswoman Stephanie Grisham said on Thursday.

But for Democrats and even a few from Trump's ultra-loyal Republican party, the documents amounted to smoking guns.

The intensifying scandal turned Trump into an ever lonelier, downbeat figure.

Usually his press conferences are stunning performances, filled with bragging, joking, storytelling and, above all, a willingness to take on any question.

At times, Trump takes so many questions that journalists are visibly exhausted.

On Wednesday, though, he ascended the podium to launch into a rambling monologue of over 20 minutes before taking just a few questions.

AFP/File / SAUL LOEB A television screen at the Trump Bar inside Trump Tower in New York shows Speaker of the House Nancy Pelosi as she announced an impeachment inquiry into the president on September 24, 2019

It was a speech delivered in a flat voice, filled with an air of hurt.

"So many leaders came up to me today and they said, sir, what you go through, no president has ever gone through," he said.

Trump has always prided himself on his ability to sell and persuade. His most famous book, ghostwritten, is even called "The Art of the Deal."

But these few days in New York have left the man with answers to every question stumbling, and reaching for conspiracy theories.