Flat-out lying': Critics reject Biden effort to re-write history on his support for US invasion of Iraq 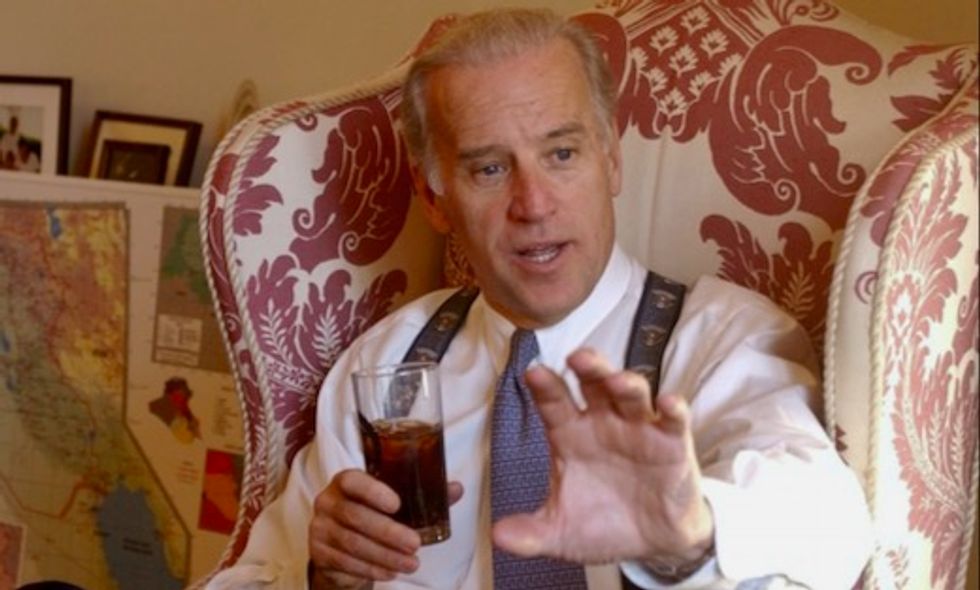 Then-Sen. Joseph R. Biden Jr. (D-Del.), ranking Democrat on Senate Foreign Relations, during a February 2003 interview in his office about the possibility of war with Iraq. (Photo by Scott J. Ferrell/Congressional Quarterly/Getty Images)

"Biden claiming to have been against the Iraq War from the start is arguably the most outlandish lie any Democrat has told this campaign."

Count his role in supporting the 2003 U.S. invasion of Iraq as another part of Joe Biden's long political career that the former vice president—who voted for the war as a senator—doesn't quite remember correctly.

In an interview with NPR published Tuesday morning, Biden told reporter Asma Khalid that he opposed the war from the very moment it began in March of 2003 despite voting for its authorization just months earlier.

Biden pointed out that he has more foreign policy experience than all of his opponents COMBINED. But he's been cr… https://t.co/Agq8GbrB4f
— Asma Khalid (@Asma Khalid) 1567507560.0

Biden said that he believed then-President George W. Bush's claim that Bush needed the threat of war to pressure Iraq to give up its weapons program and therefore voted for the authorization to use military force. But once Bush unleashed the "shock and awe" bombing campaign on the country, the former senator said he had a drastic change of heart.

"Immediately, that moment it started, I came out against the war at that moment," said Biden.

As Khalid pointed out in her report from the interview, that's not backed up by the historical record:

In multiple public remarks made after the invasion began in 2003, Biden openly supported the effort. Biden publicly said his vote was a mistake as early as 2005, but not immediately when the war began in 2003.

"Nine months ago, I voted with my colleagues to give the president of the United States of America the authority to use force, and I would vote that way again today," Biden said in a speech at the Brookings Institution on July 31, 2003. "It was a right vote then, and it'll be a correct vote today."

In a statement, Bush spokesperson Freddy Ford told NPR that Biden was misremembering the events in question.

"I'm sure it's just an innocent mistake of memory," said Ford, "but this recollection is flat wrong."

Biden's continued support for military action—even if he was publicly "against" the war—is no better, Stephen Zunes wrote in April:

Biden supported the subsequent bloody counter-insurgency war for the rest of his Senate career, speaking out against bringing the troops home or even setting a timetable for withdrawal. He even became a major advocate of splitting Iraq along ethnic and sectarian lines, seen by most people familiar with the region as very dangerous and irresponsible.

The question asked by NPR was simple, wrote Splinter's Paul Blest on Tuesday, "but because this is Joe Biden giving an interview in the year 2019, he was physically unable to get through the whole thing without saying something that was obviously bullshit."

At The Nation, Joan Walsh wondered if Biden's gaffes were enough to sink his presidency or if a focus on President Donald Trump was enough to save the Biden campaign.

"Maybe Biden thinks toughing this one out will keep the press focused on the bigger issue: Trump's manifest incompetence and corruption," Walsh mused.

"Biden claiming to have been against the Iraq War from the start is arguably the most outlandish lie any Democrat has told this campaign," Kraemer said.

The former vice president could, of course, be trying to cover for polling on his support for the war that, as Politico reported in May, likely raises concerns for the Biden campaign:

Nearly 3 in 10 Democrats said they were turned off by his Iraq War vote, and more than 40 percent of participants between the ages of 18 and 29 said his record on the issue made them less likely to support him.

Even if one takes Biden's comments at face value, trusting the administration ahead of the war betrays a gullibility that is "alarming," said Rolling Stone's Jamil Smith.

"He voted to authorize military force because Bush 45 'looked him in the eye' and said they needed to go look for Saddam's nuclear program," Smith tweeted. "This is what Biden is saying to defend the vote. My goodness."

Jacobin's Micah Uetrich made the case that "in a just world" Biden would have been tried for war crimes dute to his role in supporting the war.

Biden's comments weren't his first that have raised doubts about his commitment to—or ability to understand—accuracy. Over the summer the former vice president has been criticized for a completely inaccurate recounting of a war story, calling Keene, N.H. a town in Vermont, and claiming that Martin Luther King, Jr. and Robert F. Kennedy were assassinated in the "late 70s" (both men were killed in 1968).