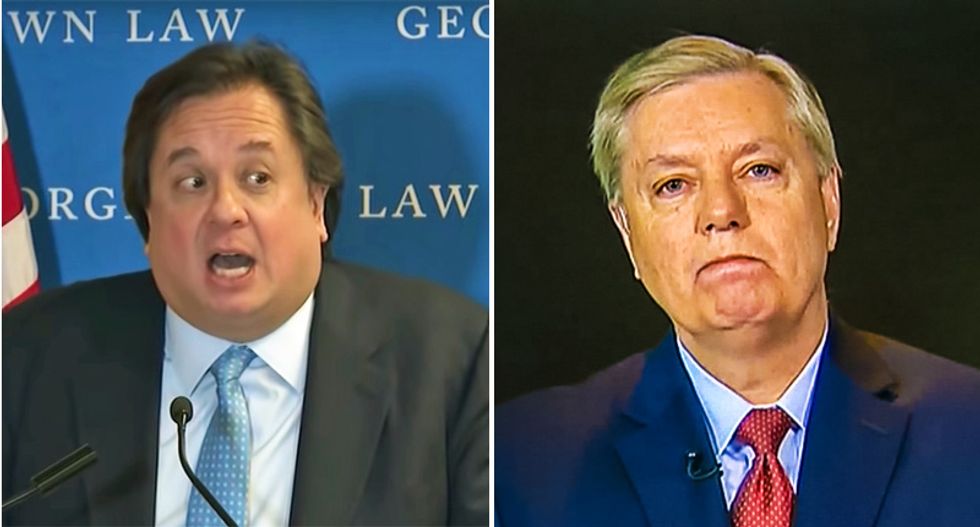 Joining with other lawyers and prosecutors who jumped all over Sen. Lindsey Graham (R-SC) for his claim that "hearsay" evidence could not be used against Donald Trump in an impeachment trial, conservative lawyer George Conway harshly brought the Trump defender up to speed on case law.

After Graham used Twitter to attempt to dismiss a whistleblower's complaint against the president since he didn't hear Trump's overture to the president of Ukraine for dirt on former Vice President Joe Biden firsthand, prosecutors weighed in by invoking former President Bill Clintons' impeachment where hearsay testimony was a central feature.

For his part, Conway -- the husband of White House adviser Kellyanne Conway -- got a tad more specific with a primer on specific laws that are in play.

You can see how that played out below:

It has been a while since you’ve practiced law, so let me help: * @realDonaldTrump’s incriminating statements are… https://t.co/mGh4HkOe3h
— George Conway (@George Conway)1569691091.0

So your argument, Senator, is pure garbage, even assuming that the rules of evidence apply in the impeachment process.
— George Conway (@George Conway)1569691093.0

Republican congressional hopeful Ron Watkins denied being "Q" from the QAnon conspiracy theory during a Friday interview with the Arizona Republic.

"I have never written a Q post. I'm not Q," Watkins claimed. "I don't have any idea about who Q is."