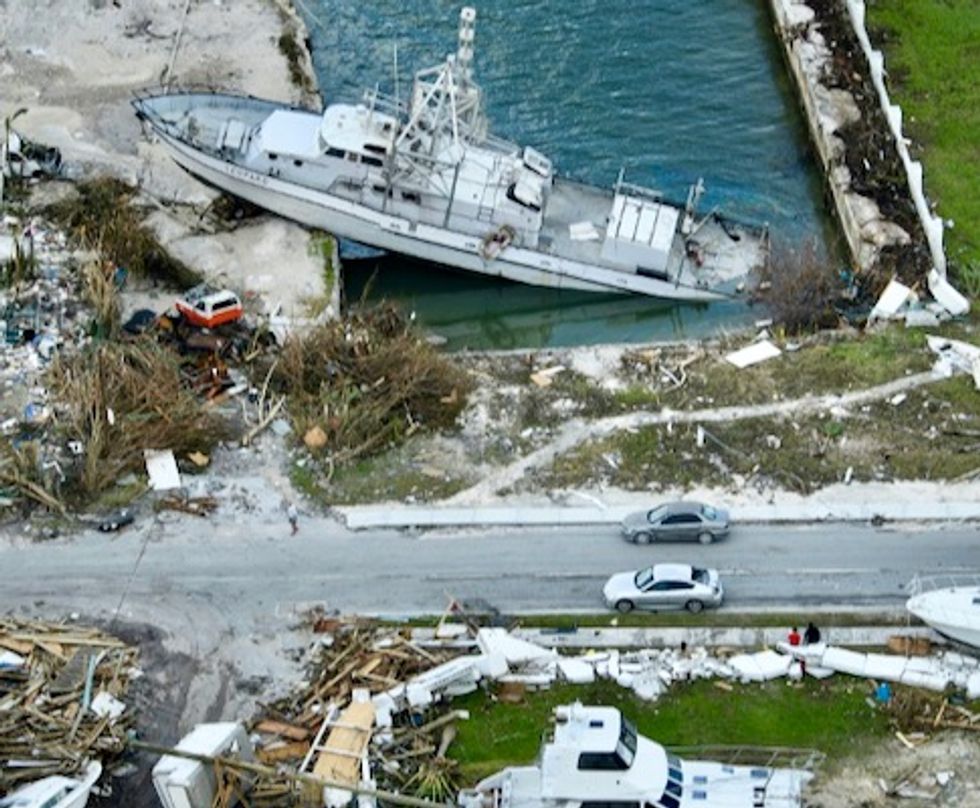 An aerial view of damage from Hurricane Dorian in Marsh Harbour, Great Abaco Island in the Bahamas AFP / Brendan Smialowski

Hurricane Dorian, which reduced much of the northern Bahamas to rubble and left at least 20 people dead, whipped the Carolinas Thursday, bringing lashing winds, heavy rainfall and the threat of dangerous storm surge to the US east coast.

As a multi-national rescue effort ramped up for thousands of victims of Dorian on the northern Bahamas islands of Grand Bahama and Abaco, residents of the Carolinas were bracing for the Category 2 storm.

In Charleston, South Carolina, wind gusts of 78 mph (126 kph) announced the storm's approach, as did heavy rain and some flooding in low-lying downtown areas of the stately port city.

Many coastal Carolina residents heeded evacuation orders while others battened down their homes and businesses with plywood and prepared to ride out the tempest.

At 11:00 am (1500 GMT), the Miami-based National Hurricane Center (NHC) said Dorian had been downgraded from a Category 3 to a Category 2 storm.

Dorian was a Category 5 hurricane -- the highest on the five-level wind scale -- when it slammed into the northern Bahamas, leaving a trail of unimaginable destruction.

An AFP team that flew over the town of Marsh Harbour in Abaco on Thursday saw scenes of catastrophic damage with hundreds of homes reduced to matchwood, cars submerged or overturned, fields of jumbled debris, widespread flooding and beached boats.

The NHC said Dorian was packing winds Thursday morning of 110 miles per hour (175 kilometers per hour), down from 115 mph (185 kph), and warned that storm surge could be as much as eight feet in some coastal areas.

The storm was located about 45 miles (75 kilometers) east-southeast of Charleston and moving up the coast in a north-northeasterly direction at eight mph (13 kph).

US Coast Guard/AFP / Erik Villa Rodriguez The US Coast Guard evacuates a survivor from Hurricane Dorian after rescuing her from Treasure Cay, Bahamas

Hundreds of thousands of people in the Carolinas are under evacuation orders as the United States girded for its taste of the storm that caused devastation in the Bahamas.

The full extent of the damage in the northern Bahamas was becoming known on Thursday as rescue teams fanned out searching for survivors and bringing relief to victims.

Prime Minister Hubert Minnis said Wednesday that at least 20 people were killed in the storm which caused what he called "generational devastation." The death toll is expected to rise.

The United Nations said 70,000 people on Grand Bahama and Abaco islands -- virtually the entire population -- were in "immediate need" of aid.

AFP / Brendan Smialowski An aerial view of damage from Hurricane Dorian in Marsh Harbour, Great Abaco Island in the Bahamas

"I was on my sailboat," Harvey said. "I lost everything."

Steven Turnquest, who arrived in Nassau from Marsh Harbour with his four- and seven-year-old sons after weathering the storm, told AFP he was grateful to be alive.

"Looking at my sons I prayed to God, saying 'If you're gonna take of us, take me and let them live,'" Turnquest said.

"I survived the hurricane holding on to a door," he added.

Shelter, drinking water, food and medicine were urgently needed for some 50,000 people on Grand Bahama and between 15,000 and 20,000 on Abaco, UN emergency relief coordinator Mark Lowcock said after a meeting with Minnis.

Amid fears of looting, Minnis warned that looters will be prosecuted "to the fullest extent of the law," and said additional police and defense force officers had been deployed.

"Speed is of the essence," Red Cross official Stephen McAndrew said of rescue operations on the two northernmost islands in the Bahamas archipelago which were pummeled by one of the strongest Atlantic storms on record.

US and British helicopters were conducting medical evacuations, aerial assessments to help coordinate relief efforts, and reconnaissance flights to assess the damage.

The US Coast Guard said it had rescued 135 people in the Bahamas as of Thursday using 10 helicopters and three Coast Guard cutters.

USAID, the US relief agency, said it was airlifting supplies such as plastic sheeting for shelter, hygiene kits and water from Miami.