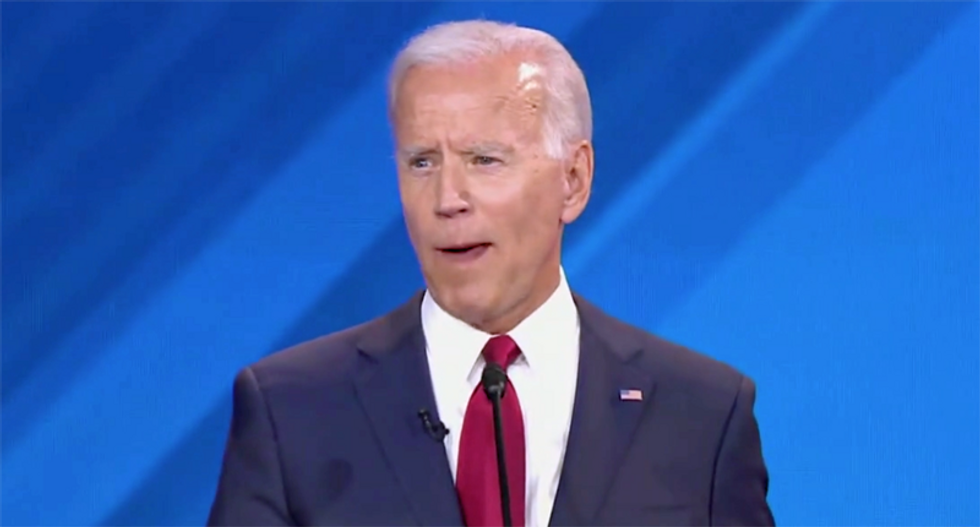 One noteworthy line to break out of the third Democratic debates was Joe Biden's line about how black parents aren't being given the cultural and educational tools to lift their children from poverty.

"We bring social workers into homes with parents to help them deal with how to raise their children," said Biden. "It’s not that they don’t want to help, they don’t know quite what to do. Play the radio, make sure the television – make sure you have the record player on at night, the phone. Make sure that kids hear words."

Biden wasn't trying to say that black parents are genetically inferior, but rather that our society isn't built to give them cultural exposure or education that would help them succeed. That being said, this argument was still broadly criticized as racist and condescending.

But as Bhaskar Sunkara noted in The Guardian, Biden's position isn't at all unusual. In fact, this sentiment is a line that both parties have adopted for years as an argument for why true financial reparations and economic redistribution, of the sort that is a third rail for white voters, is pointless.

"Wrong as Biden is, he’s just repeating what has been commonsense for generations of politicians, Democrat and Republican alike," wrote Sunkara. "Even Barack Obama had a knack for inventing stories about black kids being told by other black kids that studying hard in school was 'acting white,' or appealing to 'Cousin Pookie' and 'Uncle Jethro' to be better and more engaged citizens." Indeed, Ta-Nehisi Coates once pointed out that on this issue, Obama and former House Speaker Paul Ryan sounded barely distinguishable.

"In many ways, the 'culture of poverty' discourse has liberal political roots. Influenced by the anthropologist Oscar Lewis, Lyndon B Johnson’s assistant secretary of labor Daniel Patrick Moynihan wrote the influential The Negro Family: The Case for National Action (the 'Moynihan Report') in 1965," wrote Sunkara. "Moynihan ... was a progressive who recognized the persistence of racism and saw the roots of racial inequality as being material," as opposed to conservative thinkers who believed in racial genetic inferiority. "But the legacy of 'three centuries of sometimes unimaginable mistreatment,' he wrote, had created a culture of poverty that had to be addressed so that civil rights legislation and the ongoing war on poverty could actually uplift black Americans. If you just give the black poor money and services, the argument went, it wouldn’t have the intended effect."

This sentiment has pervaded everything from Ronald Reagan's parable of the "welfare queen" to the bipartisan adoption of work requirements for welfare. Indeed, it is not even always a racial attitude — white rural Americans often get the same condescension thrown at them by works like J. D. Vance's Hillbilly Elegy. And it is true that some cultural differences, like dialect, make it harder for some black Americans to navigate white-dominated spaces.

But the broader idea that impoverished black Americans are somehow culturally incapable of using public assistance to get out of poverty is not based on any evidence. And contrary to the idea low-income black people are not "engaged," Sunkara wrote, studies show that "black students ... tend to put more emphasis on educational achievement (and show more pride in their peers’s accomplishments) than white students" and that "black voters ... now vote at a higher rate than any other group in the country" even in the face of discriminatory voter suppression laws.

"There is finally pushback to the idea that the victims of an exploitative and violent society are sleeping in a bed of their own making," wrote Sunkara. "But the solution isn’t Biden taking sensitivity courses and being less racist or 'classist' — we need to combat the real sources of racial and class inequality. It’s not too complicated, we all basically want the same things: a decent paying job, quality medical care, good schools for our children, leaders who respect us and act with integrity. This cuts across backgrounds, they’re simple expectations of a good state that most working people feel like they deserve. And they’re outcomes we can guarantee through robust entitlements."

"Why, then, this obsession on what poor people, particularly poor black people, are doing wrong?" wrote Sunkara. "It’s simple: both Democrats and Republicans have preferred a patchwork, punitive and degrading welfare state over an efficient, well-funded, universal one. They’d rather blame the oppressed than lift them out of oppression. They’d rather talk about culture than challenge corporations."

"There’s nothing wrong with Joe Biden that doesn’t afflict the political establishment as a whole," Sunkara concluded.

Why the power grid is an 'attractive target' for domestic terrorists: report

More than 40,000 people in Moore County, North Carolina lost electricity in early December after gunmen attacked two Duke Energy substations. Law enforcement, both local and federal, have been investigating the incident and haven’t determined who was behind the attack or why. But one thing is for certain: Attacking electrical grids is very much in keeping with the extremist playbook.

Journalist Zachary B. Wolf, reporting on the attack for CNN’s website on December 5, lays out some reasons why electrical grids are an “attractive target” for extremists and terrorists.

J6 security flaws have 'largely been fixed' — but extremist groups have 'learned' from it: Capitol Police chief

On Tuesday, NPR reported that the chief of the U.S. Capitol Police, set to receive the Congressional Gold Medal, is planning remarks on the state of D.C. security, nearly two years after the January 6 attack on the Capitol that threatened the safety of lawmakers, left the complex damaged, and led to deaths, suicides, and injuries among officers. The overall assessment: Security has improved — but domestic extremist groups have gotten smarter as well.

"U.S. Capitol Police Chief Tom Manger will speak on behalf of his department at a ceremony in the Capitol Rotunda on Tuesday," reported Deirdre Walsh. "He told NPR in an interview a day before the ceremony that while there is still more work to do, the force is 'much better prepared' to respond to future threats to the Capitol. Manger said 'the big things, the big failures that occurred on January 6th have largely been fixed.'"

The Justice Department scored a historic victory with the conviction of two leading Oath Keepers, Stewart Rhodes and Kelly Meggs, on the rare charge of seditious conspiracy for their plots to attack the U.S. Capitol on January 6, along with a slate of lesser offenses for them and other close associates.

But according to CNN, the DOJ's upcoming effort to convict another, lower-ranking slate of people from the far-right militia could be more difficult: "This time ... prosecutors face a new challenge – convincing a jury that lower-level members of the Oath Keepers and associates were in on the alleged sedition plot and not just swept up in the mob on January 6, 2021," reported Hannah Rabinowitz and Holmes Lybrand.