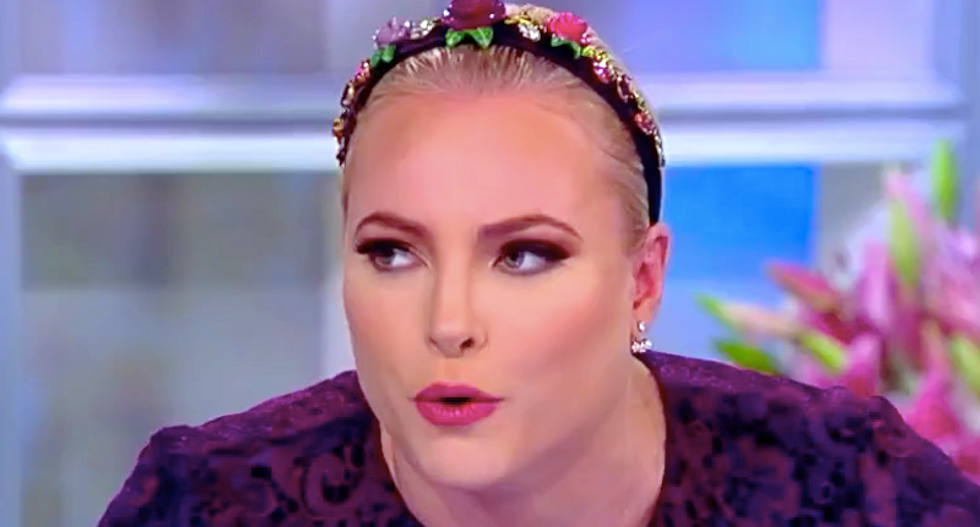 "Kyrsten Sinema and I may not always agree, but she has represented the people of Arizona with wisdom and balance"

Sen. Kyrsten Sinema of Arizona has turned out to be among the most centrist Democrats in the U.S. Senate — so centrist, in fact, that some of the more liberal/progressive members of the Arizona Democratic Party are considering formally censuring her. And Sinema has found an unlikely ally in her battle with fellow Democrats: Republican activist Meghan McCain, co-host of “The View” and daughter of the late Arizona Sen. John McCain.

The 43-year-old Sinema isn’t far-right by any means, but philosophically, she clearly has more in common with Sen. Joe Manchin of West Virginia and Sen. Doug Jones of Alabama than she does with staunch progressives like Sen. Elizabeth Warren of Massachusetts, Sen. Bernie Sanders of Vermont and Rep. Alexandria Ocasio-Cortez of New York City. The Democratic Party is a very big tent at this point, and Sinema clearly represents its centrist wing — which is why the Progressive Caucus of the Arizona Democratic Party is considering a resolution to censure her for a voting record that includes opposition to net neutrality and voting for the confirmation of Attorney General William Barr and Interior Secretary David Bernhardt.

Dan O’Neal, the state coordinator for Progressive Democrats of America, told the Arizona Republic, “Here’s the thing: we really support Kyrsten Sinema. We want her to succeed, we want her to be the best senator in the country. But the way she is voting is really disappointing. We want Democrats to vote like Democrats and not Republicans.”

JUST IN: Kyrsten Sinema is facing a censure vote from progressives in the Arizona Democratic Party who deem her pol… https://t.co/r7KITPp3f7
— azcentral (@azcentral) 1568761155.0

Meghan McCain, however, has a very different perspective. This week, McCain tweeted, “This is everything wrong with politics today. Senator @kyrstensinema and I may not always agree, but she has represented the people of Arizona with wisdom and balance and deserves respect. The idea she would be censured for representing the balance of our state is absurd.”

More than once, Sinema has exalted Meghan McCain’s father as one of her political role models. In fact, Sinema praised the late GOP senator (who died of brain cancer last year) during her victory speech in November 2018.

This is everything wrong with politics today. Senator @kyrstensinema and I may not always agree, but she has repres… https://t.co/RsLkbtup0b
— Meghan McCain (@Meghan McCain) 1568765032.0

When Sinema narrowly defeated Republican Martha McSally in the 2018 midterms, it showed how much of a swing state Arizona has become — Arizona hadn’t elected a Democrat to the U.S. Senate in decades. Sinema, who formerly served in the U.S. House of Representatives, campaigned as a centrist in 2018 and has voted like one: according to FiveThirtyEight, Sinema has voted in line with President Donald Trump’s positions 54% of the time during her political career compared to Ocasio-Cortez voting with him only 15% of the time.

Having flipped one of Arizona’s U.S. Senate seats in 2018, Democrats are hoping to flip another one in 2020. Polls have been showing a very close race between Democrat Mark Kelly and McSally, who was appointed to a different Senate seat after losing to Sinema last year. Some polls have shown Kelly ahead, while others have showed McSally with a slight lead.

Sinema presently holds the U.S. Senate seat vacated by Republican Jeff Flake after he decided not to seek reelection in 2018, while Kelly and McSally are competing for the Senate seat held for many years by the late Sen. Barry Goldwater and, after that, Sen. John McCain. And if Democrats did end up with two U.S. Senate seats in Arizona in 2021, that would be a major political shocker in light of how Republican Arizona has been historically and its conservative Goldwater/McCain heritage.