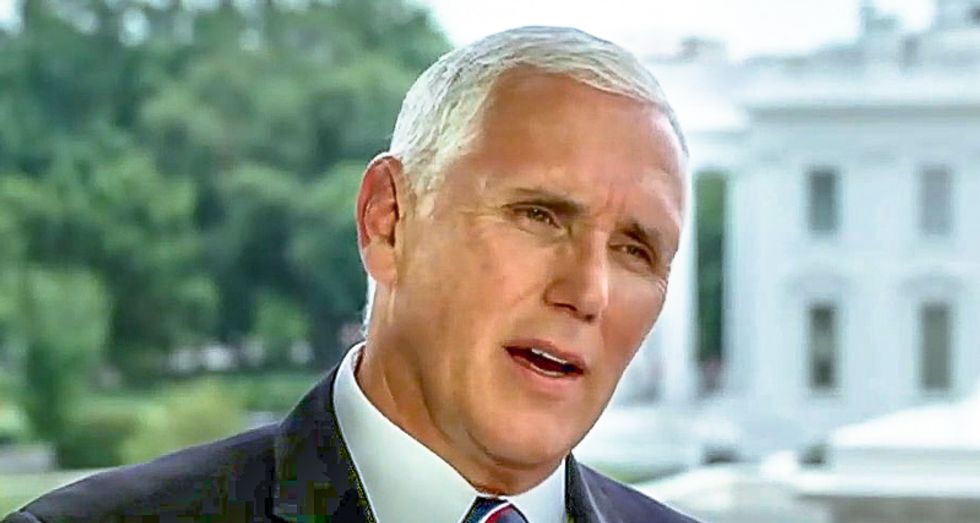 In a scorching column for "The Week," author Neil J. Young called out Vice President Mike Pence for throwing away what little credibility he had left with his recent decision to stay at a Trump resort in Doonbeg, Ireland while on a diplomatic mission, thereby lining the president's pockets.

According to the columnist, Trump could not have found a more compliant "lackey" then the former Indiana House rep who also provided him with cover by soothing concerns of evangelical Christians.

Noting that Pence's Great America Committee PAC has also spent a reported quarter of a million dollars in Trump properties since 2017, Young said that Pence sees no problem contributing to the president's use of office to enrich himself.

"This latest contribution to Trump's coffers comes from taxpayers' dollars rather than those of his political supporters, but either way Pence has made it clear he is all-too-willing to use other people's cash to continue to buy the president's favor. Maybe this is what counts as fiscal conservatism in the GOP these days," Young accused. "With Pence, Trump may have never imagined how good a lackey he would get from his second in command. Trump selected Pence as his running mate in 2016 to help shore up his support among white evangelicals."

Young added that, by becoming the president's running mate, Pence was attempting to resurrect his political career, and may have done irreparable damage to his reputation instead.

"Aside from providing moral — or at least, political — cover to Trump's ongoing unsavory conduct, Pence's habit of excessively praising the president and his creepy tendency to look at Trump adoringly has become legendary. His continual stroking of the world's most fragile ego demonstrates Pence knows exactly what he must do to keep Trump on his side, something vital for the vice president's own political ambitions," he wrote.

Unfortunately, as Young points out, that may not be enough since Trump has been known to turn on former associates.

"Given how petty and disloyal Trump is, Pence can never be too sure about where he sits with the president," he wrote. "Earlier this summer, Trump refused to say whether he would endorse Pence's own presidential run in 2024, part of the routine cat-and-mouse game Trump revels in playing with those close to him but an especially bruising insult to someone who has proved so obsequious."

"That's where Pence's lavish spending on Trump's properties comes in. Far more than providing political cover or offering constant flattery, Pence stands to gain the most with Trump by continuing to put money in the president's wallet," he charged. "This is a presidency for sale, after all, and those around Trump understand both what it can buy them and the price of not playing Trump's game."

"That just points to how corrupted Pence has become from his association with Trump," Young wrote."But for all his supposed convictions and true commitments, Pence — like the Republican Party generally — has readily sacrificed himself for the political expediency of keeping Trump happy. Mike Pence famously likes to say he's 'a Christian, a conservative, and a Republican — in that order.' His vice presidency has made clear, however, that he's really just a Trumper, from start to finish."