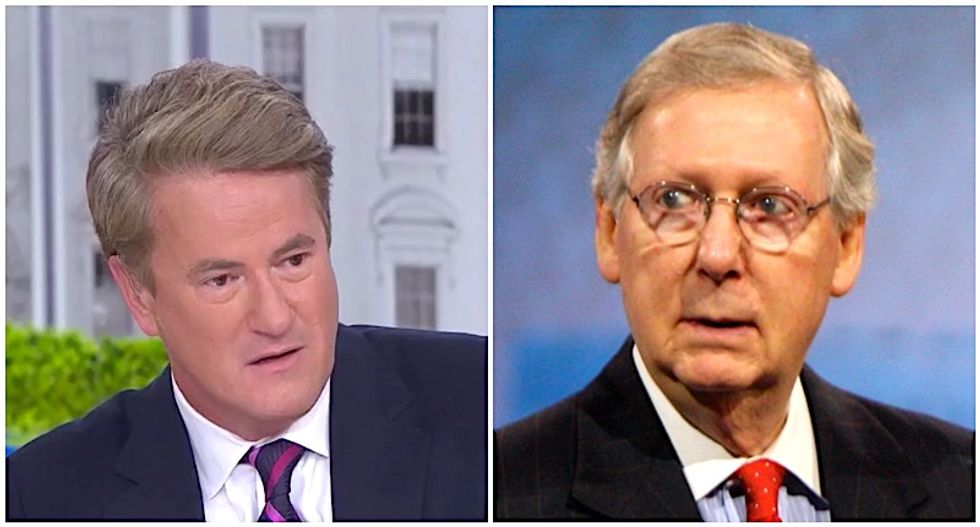 MSNBC's Joe Scarborough is credited with coining "Moscow Mitch," and he explained why the Senate majority leader won't be able to escape the nickname he so clearly hates.

Senate Majority Leader Mitch McConnell (R-KY) complained Tuesday the sobriquet was "over the top" and "modern-day McCarthyism," but the "Morning Joe" host told the GOP leader to get used to it -- because it would end up being his legacy.

"You look at this guy's legacy, and it's going to be two things, I think right now," Scarborough said. "He's going to have a legacy of basically doing the work of Vladimir Putin, an ex-KGB agent, and Mitch McConnell has been told by the CIA, director of national intelligence, the United States military, he has been told by everybody that Russia is trying to interfere and disrupt our democratic process, that we are under attack, so Mitch McConnell is killing Republican bills like Marco Rubio's, and Democratic bills that would protect the homeland from this attack from Russia."

"'Moscow Mitch' is doing nothing about it, but he's killing every bill, including Marco Rubio's bill that simply says if we catch somebody interfering with American democracy, we will put sanctions on them," Scarborough said. "'Moscow Mitch' killed that bill, too. 'Moscow Mitch' has killed every single bill that the intel community has said will protect America, so that's his legacy, not protecting us from enemies foreign."

"What about his legacy protecting us from domestic enemies," Scarborough said, "people that would shoot children, first graders, the Friday before they go home for Christmas holiday with AR-15s, or people that would shoot wildly from their car in Odessa, Texas, and shoot 17-month-old babies in the back seat of their cars or would shoot up people going to worship Jesus in Texas churches that do nothing about it, or shoot up people going to Walmart for back-to-school shopping?"

"But Mitch McConnell, just like 'Moscow Mitch,' won't do anything in protecting us from foreign enemies, he has been the one person that has killed every one of these bills to protect us from our domestic enemies, that are gunning down our children every day," Scarborough continued.

"What's his end game?" he added. "What's his legacy? Where does it end? Who supports 'Moscow Mitch'?"