‘My AR is ready for you’: Texas Republican ominously issues death threat after Beto’s call to ban assault rifles 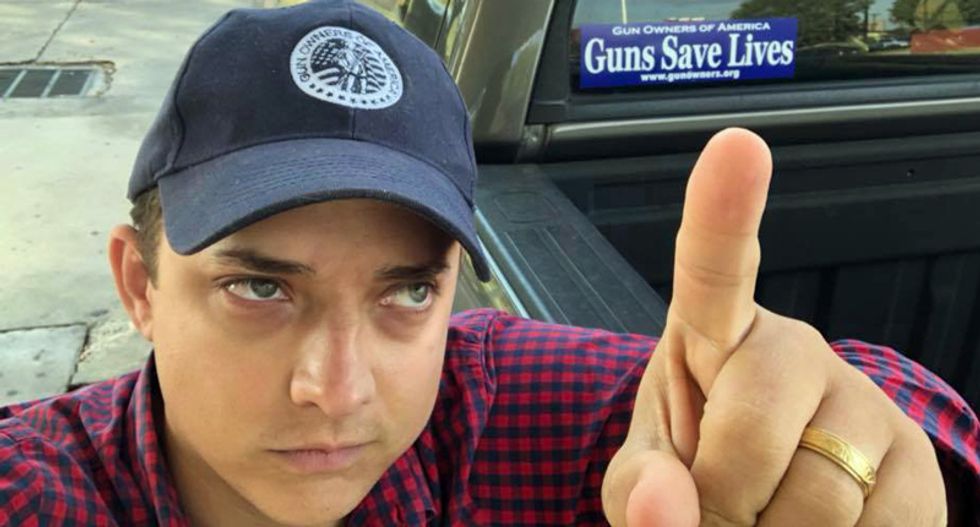 "Hell, yes, we’re going to take your AR-15, your AK-47. We’re not going to allow it to be used against a fellow American anymore," O'Rourke said.

His campaign tweeted out the same line.

But Texas state Rep. Briscoe Cain, a Republican, replied to the proposal with an ominous warning.

Earlier on Thursday, Cain was ridiculed for suggesting the city of Austin, Texas should be dissolved. Cain previously made headlines for mocking Stephen Hawking's death and sneaking a handgun into the Texas Democratic Party convention.

Update: Gov. DeSantis has issued an emergency order for 24 counties in response to the tropical system threatening Florida next week. “This declaration will make available important resources and support, as well as free up funding sources for emergency protective measures. Under this emergency order, members of the Florida National Guard will be activated and on standby awaiting orders,” the governor’s office said.

The Dow narrowly avoided ending more than 20% lower than its Jan. 4 record all-time closing peak of 36,799.64 points, meaning the blue-chip index did not attain a bear market label, according to a widely used definition.

‘Most significant criminal exposure Trump has ever faced’: expert breaks down the legal liabilities

Donald Trump is likely to lose his secret court battle to prevent a federal grand jury in Washington, D.C. from obtaining evidence related to the unsuccessful effort to prevent the peaceful transfer of power after Joe Biden won the 2020 presidential election, according to an analysis that aired Friday on CNN.

CNN reported, "Former President Donald Trump’s attorneys are fighting a secret court battle to block a federal grand jury from gathering information from an expanding circle of close Trump aides about his efforts to overturn the 2020 election, people briefed on the matter told CNN. The high-stakes legal dispute – which included the appearance of three attorneys representing Trump at the Washington, DC, federal courthouse on Thursday afternoon – is the most aggressive step taken by the former President to assert executive and attorney-client privileges in order to prevent some witnesses from sharing information in the criminal investigation events surrounding January 6, 2021."