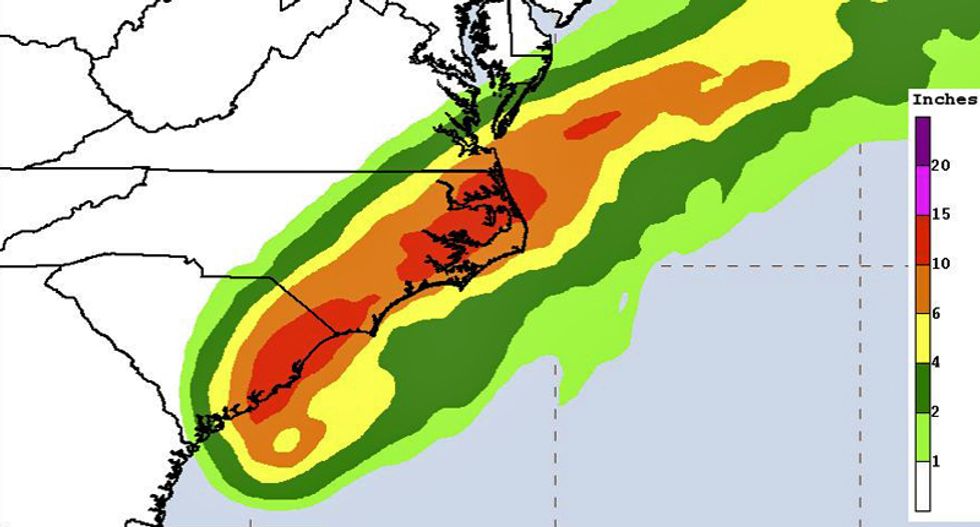 Hurricane Dorian pounded the Carolinas with strong winds and driving rain on Thursday after cutting a swath through the northern Bahamas, where it left at least 20 people dead and thousands homeless.

Residents of South and North Carolina were bracing for the Category 2 storm as rescue efforts ramped up for Dorian victims on the hardest-hit Bahamas islands of Grand Bahama and Abaco.

US weather forecasters warned that some areas of the Carolina coast could see dangerous storm surge of up to seven feet (2.1 meters) and between six and 12 inches of rain.

The slow-moving monster storm also spawned several tornadoes but there were no immediate reports of casualties.

In the historic downtown area of Charleston, several trees and traffic lights were downed by the strong winds along with power lines. Streets were mostly deserted and many stores were boarded up.

Many residents of coastal Carolina heeded evacuation orders while others battened down their homes with plywood and prepared to ride out the tempest.

It was located about 60 miles (95 kilometers) south of Myrtle Beach, South Carolina, and moving up the coast in a north-northeasterly direction at eight mph (13 kph).

Dorian was a Category 5 hurricane -- the highest on the five-level wind scale -- when it slammed into the northern Bahamas on Sunday, leaving a trail of unimaginable destruction.

An AFP team in the town of Marsh Harbour on Abaco on Thursday saw scenes of catastrophic damage with homes reduced to matchsticks, overturned cars, fields of jumbled debris, widespread flooding and beached boats.

Teams of men in masks and white protective suits were seen loading corpses encased in green body bags onto a flatbed truck.

Storm-dazed residents were out on the streets dragging suitcases containing their most precious possessions.

The full extent of the damage in the northern Bahamas was becoming known on Thursday as rescue teams fanned out searching for survivors and bringing relief to victims.

Prime Minister Hubert Minnis said at least 20 people were killed in the storm which caused what he called "generational devastation." The death toll is expected to rise.

The United Nations said 70,000 people on Grand Bahama and Abaco -- virtually the entire population -- were in "immediate need" of aid.

"I was on my sailboat," Harvey said. "I lost everything."

Steven Turnquest, who arrived in Nassau from Marsh Harbour with his four- and seven-year-old sons after weathering the storm, told AFP he was grateful to be alive.

Speaking of his sons, Turnquest said he prayed to God to "take me and let them live."

"I survived the hurricane holding on to a door," he added.

Shelter, drinking water, food and medicine are urgently needed for some 50,000 people on Grand Bahama and between 15,000 and 20,000 on Abaco, according to UN officials.

Amid fears of lawlessness in the ravaged storm zone, Minnis warned that any looters will be prosecuted "to the fullest extent of the law," and additional police and defense force officers deployed.

US and British helicopters were conducting medical evacuations, aerial assessments to help coordinate relief efforts, and reconnaissance flights to assess the damage.

The US Coast Guard said it had rescued 135 people in the Bahamas as of Thursday using 10 helicopters and three Coast Guard cutters.

The UN's World Food Program said it had eight tons of ready-to-eat meals poised to arrive in the Bahamas.

The WFP is organizing an airlift from the UN hub in Panama of storage units, generators, and prefab offices for two logistics hubs to be established on the main islands, it said.