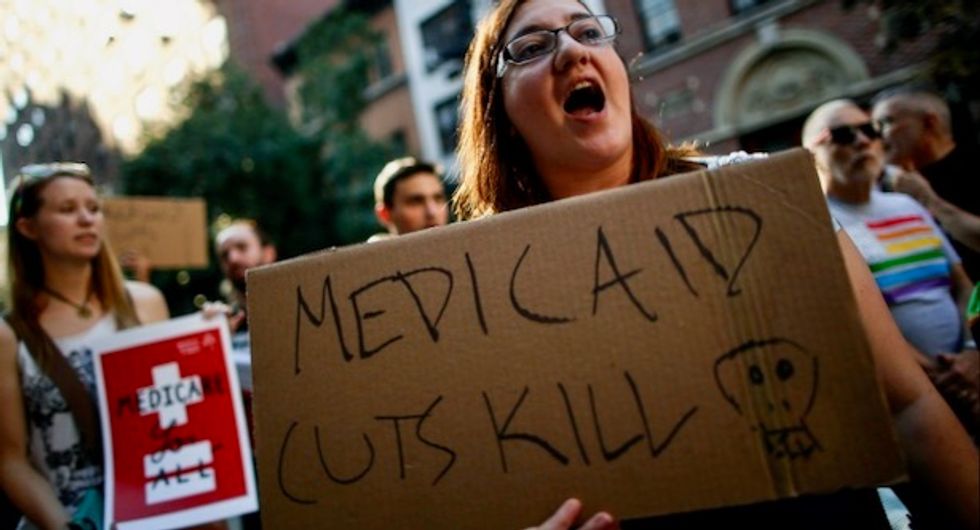 A small group of activists rally against the Republican healthcare agenda outside of the Metropolitan Republican Club, July 5, 2017 in New York City. (Photo: Drew Angerer/Getty Images)

The plan, if enacted, threatens to unleash a "radical change to the medical safety net for the nation's poorest citizens."

A social justice advocacy group shot back on Tuesday after Tennessee unveiled a plan to switch the state's Medicaid program into a block grant program.

"A block grant is a Medicaid cut in disguise, and Tennessee should not be fooled," said the Tennessee Justice Center.

The state released details of the proposal (pdf) Tuesday.

Any overhaul of TennCare would need the approval of the Centers for Medicare and Medicaid Services. The Trump administration—to the ire of healthcare and anti-poverty advocates—has been gunning for states to make such a switch.

"If Tennessee garners federal approval on a policy to cut Medicaid funds—and survives the subsequent lawsuits it'd surely face—it would encourage other conservative states to do the same," reported Axios. "This would be a radical change to the medical safety net for the nation's poorest citizens."

As The Associated Press reported, "Currently, the federal government pays a percentage of each state's Medicaid costs, no matter how much they rise in any given year. For Tennessee, that means receiving approximately $7.5 billion in federal money for its $12.1 billion Medicaid program, or 65 percent."

CNN laid out how things could change for the state under the proposal:

The proposal from Tennessee—which has not expanded Medicaid—doesn't follow the typical block-grant idea, which would offer a lump sum payment to a state. It's seeking to exclude expenses related to outpatient prescription drugs, home- and community-based long-term care, uncompensated care payments to hospitals and several other costs. These would continue to be funded under the current formula.

The block grant funding would rise if enrollment in Tennessee's program, called TennCare, increases in the future—addressing a major concern that the safety net couldn't expand in times of economic downturns. Plus, the annual increase in funding would be based on Congressional Budget Office projections for Medicaid growth, which is more generous than inflation.

Another provision: If the state spends less than the block grant amount, it gets to keep 50 percent of the federal share of those savings.

Though it may differ from a typical block grant plan, critics say there's still plenty of reason for concern.

Joan Alker, executive director of the Georgetown University Health Policy Institute's Center for Children and Families (DCCF), outlined some of the concerns in a Twitter thread:

Edwin Park, a research professor with CCF, added his concerns:

Following reports in January that the Trump administration was moving to make it easier for states to switch to block grants for Medicaid,  Rep. Frank Pallone (D-N.J.), chair of the House Energy and Commerce Committee, which has jurisdiction over Medicaid, said that CMS had no authority to make those change—a point he reiterated on Wednesday.

"This is illegal," tweeted Pallone, "and the Trump Administration does not have the authority to do this."