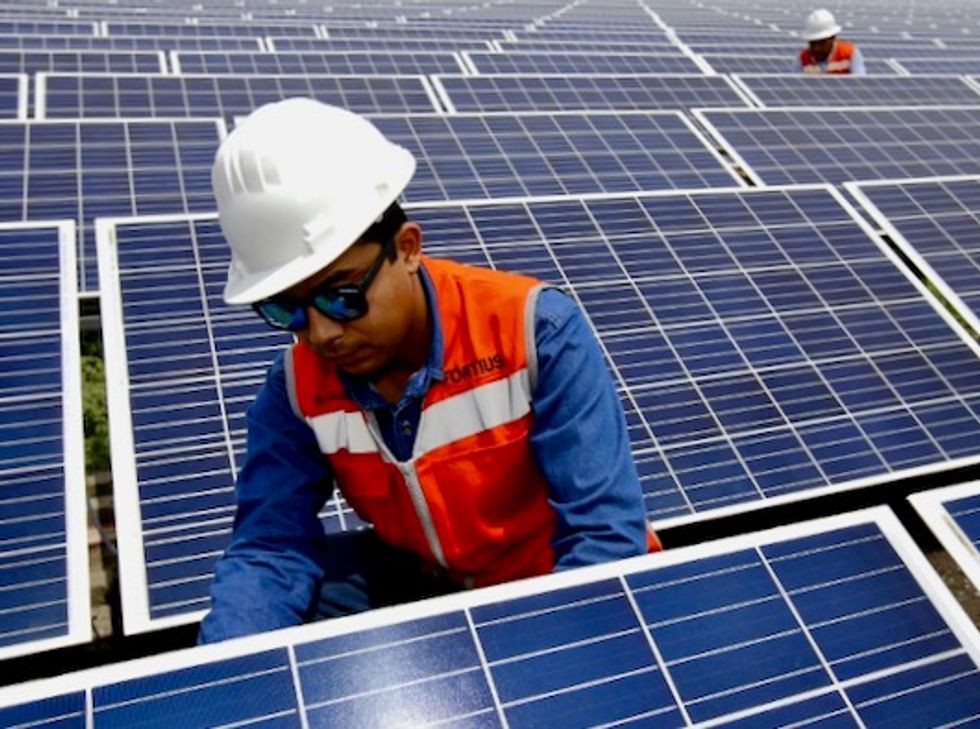 Worldwide investment in renewables since 2009 is on course to hit $2.6 trillion (2.35 trillion euros) by the end of the year, largely driven by "spectacular" falls in the price of solar panels, the UN's annual assessment of green energy trends said.

The world's renewable capacity -- power generated from solar, wind, geothermal and biomass -- rose from 414 gigawatts in 2009 to 1650 gigawatts this year, and renewables now account for 12.9 percent of all electricity generated on Earth.

Solar accounted for the largest single share of the more than 2300 GW of additional power capacity installed globally in the past decade, outpacing fossil fuels such as coal and gas.

Yet despite the surge in carbon-free solar and wind, emissions from power have continued to rise, with the world belching out more manmade greenhouse gases in 2018 than any year on record.

Inger Andersen, executive director of the UN Environment Programme, hailed Thursday what she termed a "decade of incredible growth in renewables".

"This shows that the transition of the energy sector is on its way," Francoise d'Estais, head of the UNEP finance unit's Energy and Climate Branch, told AFP.

AFP/File / STR Of the more than 2300 GW of additional power capacity installed globally in the past decade, solar accounted for the largest single share, outpacing fossil fuels such as coal and gas

"It's still not rapid enough for the world to meet both climate and development goals."

Authors of the report, compiled in conjunction with the Frankfurt School of Finance and Management and Bloomberg New Energy Finance (NEF), said the switch to renewables was largely driven by cost competitiveness.

The price of energy generated by solar photovoltaics has fallen 81 percent since 2009, while onshore wind energy is now 46 percent cheaper than a decade ago.

"If you time travel back we would be astounded by what has happened since then," said Angus McCrone, chief editor of Bloomberg (NEF).

"The image of renewables was that they were fairly expensive, dependant on subsidies, and a bit of a rich economy luxury in a sense. Certainly that was the argument from the fossil fuel side."

Yet overall emissions from energy continue to rise, imperilling the temperature goals laid out in the Paris climate deal as global demand shows no sign of abating.

"Counting for renewables growth is only half the story," Ulf Moslener, head of research at the Frankfurt School, told AFP.

"When I'm on a diet I can't just count the salads I'm eating but also the chocolate cakes. So it's a case of trying to substitute fossil fuels out of the market and I see that as quite a challenge."

The report highlights 30 nations that have invested at least $1 billion in renewables in the past decade -- many of whom are also significant producers and users of fossil fuels.

For example China, which produces around 29 percent of manmade CO2, is far and away the biggest investor in renewables, ploughing in $760 billion since 2010.

Without naming China specifically, McCrone said some nations had something of a "split personality" when it came to energy.

"They want to retain the market for the fossil fuels that they derive income from," he said.

"On the other hand they don't want to be left behind in the technological race and do nothing on renewables."