Native North Americans first arrived in Florida approximately 14,550 years ago. Evidence for these stone-tool-wielding, megafauna-hunting peoples can be found at the bottom of numerous limestone freshwater sinkholes in Florida’s Panhandle and along the ancient shoreline of the Gulf of Mexico.

Specialized archaeologists using scuba gear, remote sensing equipment or submersibles can study underwater sites if they are not deeply buried or destroyed by erosion. This is important because Florida’s archaeological resources face significant threats due to sea level rise driven by climate change. According to a new U.N. report, global sea levels could increase by over 3 feet by the year 2100.

Archaeological sites contain evidence of what people ate in the past, what kinds of houses they built, how they buried their dead and what they did to memorialize stories, leadership and community. These places literally embody human lives, and are the only records we have of prehistoric indigenous peoples of the New World.

Between the years 1500 and 1850, 2.5 million Europeans migrated to the New World. As a consequence of their arrival, 50 million indigenous peoples died from disease, massacres and slavery.

As scholars who study anthropology and archaeology, we believe that the genocide of these oral historical and literate societies, native to North, South and Central America, makes it even more important to preserve their ancient sites. Without them, we may never be able to learn the history of the first peoples of this land.

At present, 1,539 archaeological sites are located at or below sea level in Florida. By A.D. 2100 up to 6,820 will become submerged by sea level rise. 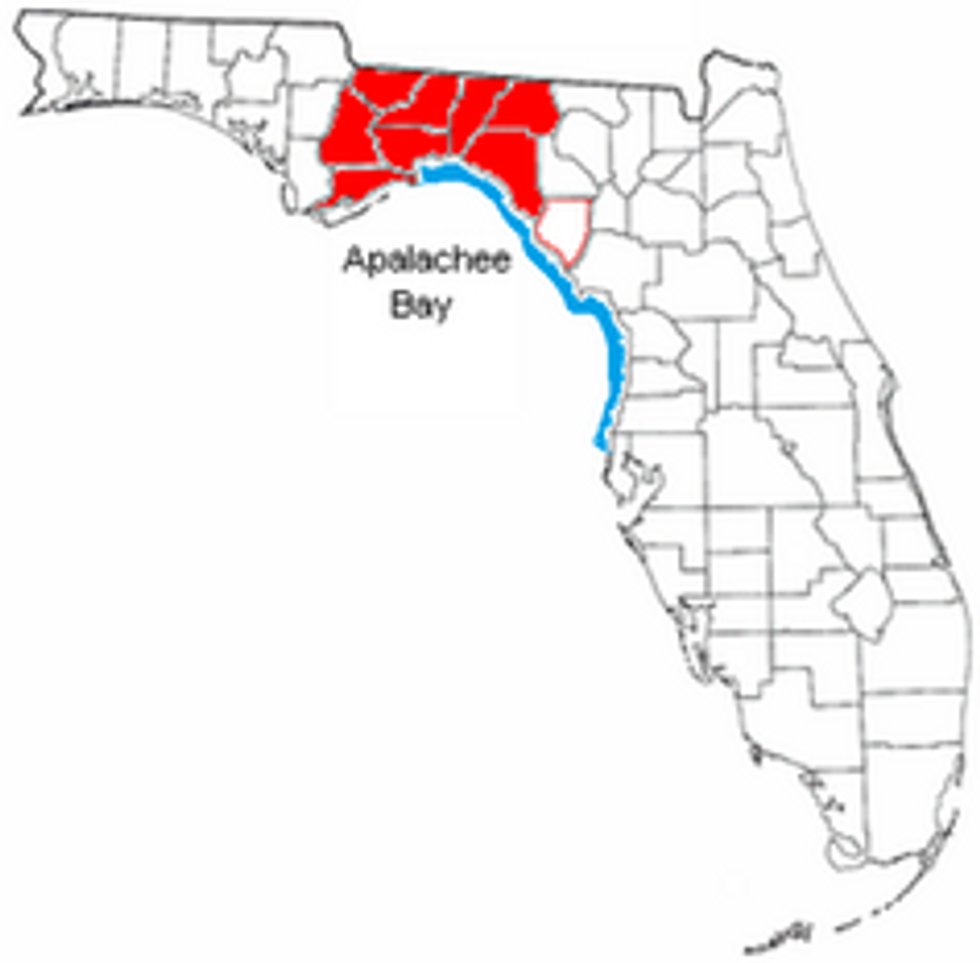 Florida’s Big Bend region – the eastern half of the Panhandle – contains 541 Native American archaeological sites, found from the coast to inland hills and river valleys. They include earthen and shell mounds and shell middens, or refuse heaps. These sites belong to Deptford, Swift Creek, Weeden Island or Fort Walton and Apalachee cultures, and represent a time period of over 2,000 years of occupation, from 500 B.C. to 1540 A.D.

Archaeological sites belonging to these cultures in the Gulf of Mexico region represent a continuation of earlier lifeways dating as far back as 7,000 years ago. But they also mark shifts in ceramic and stone toolmaking technology, and significant changes in ceremonies associated with monument construction and burial of the dead.

Notable sites in this region include Mound Field, Bird Hammock and Garden Patch – places where hunter-fisher-gatherers built monuments, traded for goods and practiced crafts such as basketry and bead and pottery production.

The Garden Patch site, a barely investigated Middle Woodland shell midden and six-mound complex, is one of Florida’s innumerable cultural resources at risk. With roughly 5 to 6 feet of additional sea level rise, most low-lying areas at the site will be flooded, and saltwater will kill grasses and trees. With no tree cover or vegetation, the site’s mounds, middens and mortuary remains will erode away and be permanently destroyed.

There are cost-effective ways to stabilize the site and make it more resilient to climate change. They include planting salt-tolerant grasses and shrubs, such as spartina and saline-adapted mangroves, and building sea walls and levees to redirect water. However, studies show that hard systems like this are not always effective and can have negative environmental effects on surrounding areas.

An even more effective response is raising public awareness of America’s Native and Indigenous heritage, and encouraging study of these sites while they are still above water. 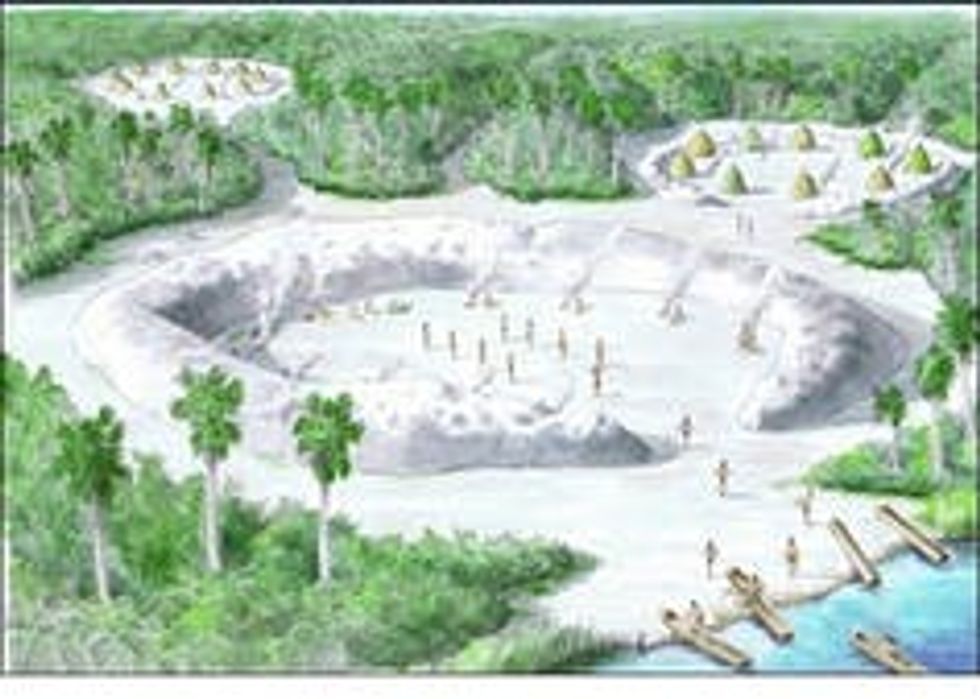 Shell rings along the U.S. southeast coast were the largest structures in North America when they were built 3,000-5,000 years ago. Researchers believe they were places of celebration, ritual and feasting.

Other parts of the Gulf coast, such as the Mississippi River Delta and coastal Louisiana, are comprised mainly of low-lying marshes that are extremely vulnerable to sea level rise. In contrast, Big Bend interior cities like Tallahassee will be relatively well protected by geographic features that prevent seawater from penetrating far inland.

Except for universities, hospitals and government in Leon County and Tallahassee, the main industries in the coastal Big Bend region are fishing, farming and tourism, and the population of the entire area is just 500,000. Relatively few people in this part of Florida will be affected by rising seas compared to large, low-lying cities like Tampa, Miami and Jacksonville, with a collective population of 9.6 million people.

However, infrastructure along the coast will be significantly affected. For example, St. George Island State Park, which is on a 28-mile barrier island, incurred over US$5 million in damage from Hurricane Michael in October 2018, and the entire island will be inundated with as little as one meter, or about 3 feet, of sea level rise.

American history is Native American, African American, Latinx, Asian and European. Our cumulative story begins 15,000 years ago and ends when we decide. In our view, Americans and scholars have an obligation to try to save our collective histories.

The discovery of stone tools alongside mastodon bones in a Florida river shows that humans settled the southeastern U.S. up to 1,500 years earlier than scientists previously believed.

By advocating for the study of the past, we hope to encourage documentation of endangered landscapes, collaborative data recording, multi-agency partnerships and acknowledgment that the U.S. is going to lose sites that are parts of its heritage. Rather than focusing on preserving singular parts of America’s past, like Jamestown, Virginia, the first permanent English settlement in North America – which is also in a low-lying and threatened environment – we want to see lesser-known features of America’s past documented and saved as well.

As we see it, Americans’ collective identities are rooted in a shared past and in physical landscapes and places. That makes saving these places important. The first step is talking about them. The next step begins when scholars and the public come together to learn about the past and advocate for preserving it.