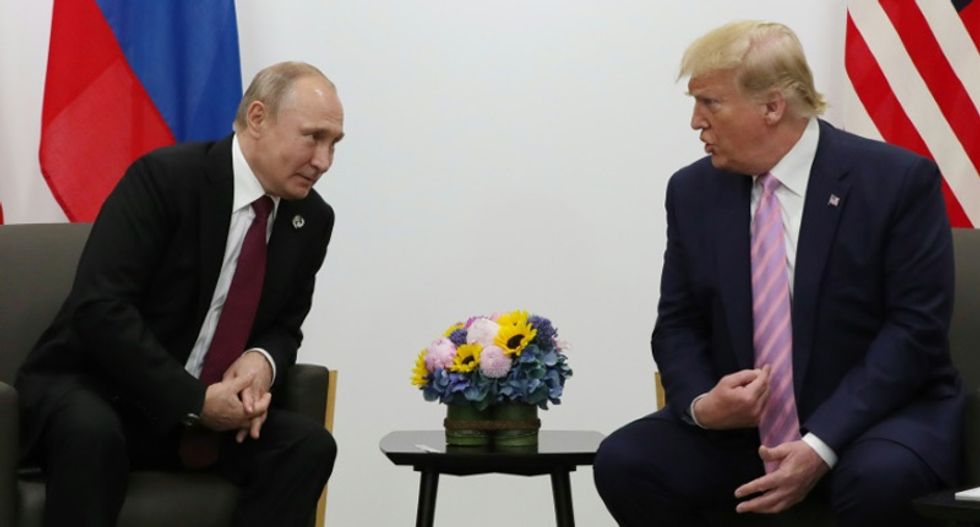 On Monday, Reuters reported that the Kremlin is demanding the United States seek permission from them if officials intend to publish the transcripts of phone calls between President Donald Trump and Russian President Vladimir Putin.

There is no clear legal authority Russia would have under law to veto the release of any of the transcripts.

Some members of Congress are seeking to publish the transcripts of these calls as part of their impeachment investigation into Trump, which was kicked off by the revelation that an intelligence community whistleblower filed a complaint that he tried to strong-arm Ukrainian President Volodymyr Zelensky into digging up dirt on former Vice President Joe Biden.

White House officials subsequently moved that transcript, among others, onto a server intended for code-word classified information, to prevent them from being leaked — a highly unusual and improper move.

The Biden administration will ask the U.S. Supreme Court to stop enforcement of Texas' near-total abortion ban, according to a Friday statement from a U.S. Department of Justice spokesperson.

Courts have pingponged back and forth on the law's enforceability over several weeks. The Justice Department's move comes after a panel of federal appellate judges ordered late Thursday that the ban will remain in place while its constitutionality is decided.

Netflix has fired an employee who organized a walkout among transgender employees to protest against Dave Chappelle's new comedy special in which he makes several jokes targeting transgender people.

The Verge reports that the employee, who is remaining anonymous due to worries about being subjected to an online harassment campaign, was fired on suspicion of leaking financial numbers about how much Netflix paid Chappelle for his latest special.

As the House committee probing the January 6 attack on the Capitol ramps up its investigation, new details continue to emerge about former President Donald Trump's efforts to stay in the White House despite losing the 2020 election. The Senate Judiciary Committee recently revealed Trump directly asked the Justice Department nine times for help overturning the election. One of Trump's lawyers also wrote a memo detailing how Trump could stage a coup by getting electors from seven states thrown out, thus denying Biden's victory. The House select committee may also file charges against top Trump adviser Steve Bannon if he refuses to testify and hand over documents. John Nichols, national affairs correspondent for The Nation, says Trump's continued grip on the Republican Party and his likely run for president in 2024 make the investigations vital to safeguarding democracy. "We really are looking at the prospect that Trump will seek to implement exactly the strategy that he was trying to implement before January 6 again in 2024," says Nichols.