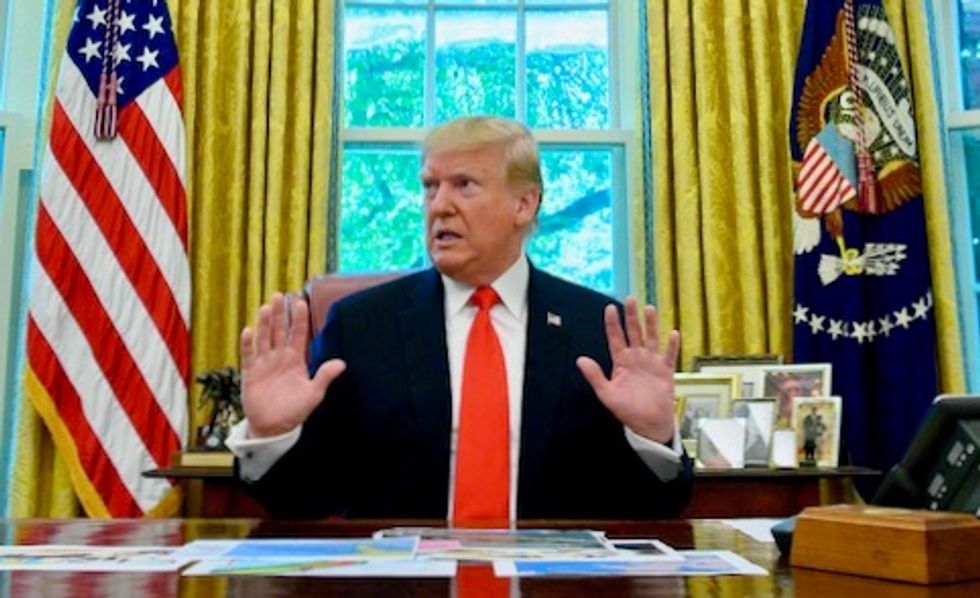 President Donald Trump speaks to the media from the Oval Office at the White House in Washington, D.C. on September 4, 2019. (Photo: Jim Watson/AFP/Getty Images)

As GOP fearmongering about the so-called looming socialist menace continues to intensify ahead of the 2020 elections, President Donald Trump has reportedly expressed concern behind the scenes that anti-socialist messaging may not be as popular or effective as Republican strategists appear to believe.

The Daily Beast, citing anonymous sources close to the president, reported Sunday night that "Trump has repeatedly told friends and donors that running against 'socialism' in a general election may not be 'so easy' because of its populist draw."

"I get the sense Trump knows the reckoning is coming and is worried about being exposed as a fraud. No Sharpie edits will save him."

During a recent private donor event, according to The Daily Beast, Trump warned if Democrats run on canceling student loan debt, for instance, "that's a tough one" to campaign against.

Trump's reported misgivings about framing his reelection message around opposition to "socialism" come as Republicans are working hard in the lead-up to the 2020 elections to label all Democrats as socialists, a playbook the GOP has drawn from for decades.

The campaign of Sen. Bernie Sanders (I-Vt.), the only 2020 Democratic presidential candidate running as a democratic socialist, said the president's private fears show he's concerned about being attacked as a phony populist whose policies have disproportionately benefited the wealthiest Americans.

"One of the reasons I feel so strongly about Bernie's ability to beat Trump," said Sanders campaign manager Faiz Shakir, "is because we know that the Democratic nominee will have to credibly explain that Trump betrayed the working class with false promises and that he does not put forward real solutions to help struggling people."

"Bernie can and will do that successfully," Shakir told The Daily Beast. "We'll have a national debate about policies that help the one percent versus policies that lift the 99. I get the sense Trump knows the reckoning is coming and is worried about being exposed as a fraud. No Sharpie edits will save him."

In a June speech outlining his vision of a democratic socialist society, Sanders—who is running on proposals to wipe out all $1.6 trillion in U.S. student loan debt and guarantee healthcare to all—said that while "Trump and his fellow oligarchs attack us for our support of democratic socialism, they don't really oppose all forms of socialism."

"They may hate democratic socialism because it benefits working people," said the Vermont senator, "but they absolutely love corporate socialism that enriches Trump and other billionaires."

Sanders argued a robust democratic socialist message that recognizes economic rights as human rights "is the only way to defeat oligarchy and authoritarianism."

"When Trump screams socialism, all of his hypocrisy will not be lost on the American people," said Sanders. "Americans will know that he is attacking all that we take for granted: from Social Security to Medicare to veterans healthcare to roads and bridges to public schools to national parks to clean water and clean air."