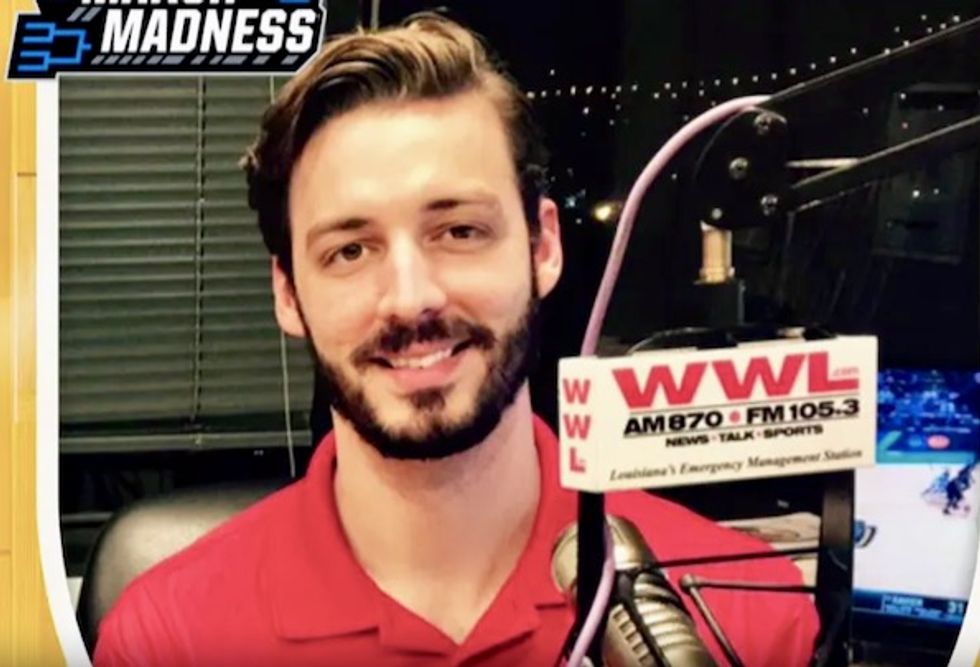 Louisiana sports radio talk show host Seth Dunlap publicly acknowledged he is gay in an open letter criticizing New Orleans Saints quarterback Drew Brees for recording a video for the anti-gay organization Focus on the Family. In response, his own radio station, WWL, posted a tweet calling him a “fag.”

The tweet was quickly deleted and the station’s management, according to The Gambit and Outsports, is investigating.

On Tuesday, Dunlap posted a tweet, unrelated to his criticism of Brees.

Dunlap was angered that Brees not only recorded the video for Focus On The Family, but when Brees was battered with criticism for partnering with the very anti-gay group, instead of distancing himself and apologizing, he insisted his critics were wrong.

That’s when Dunlap chose to respond to Brees, in a very respectful open letter, which he posted to Facebook.

“I am a gay man who has worked nearly two decades in the sports media industry,” Dunlap said, later adding he is “an out-and-open gay man.”

Outsports reports it’s “his first public statement about his sexuality.”

“My personal experience, not headlines or Twitter innuendo, caused me to recoil at your initial video, and become even further flummoxed at your response today,” Dunlap wrote.

“I’m asking for reflection on how your words and your seeming-embrace of an odious, bigoted organization can cause a vulnerable and constantly-attacked community to recoil. If I can offer unsolicited advice; take the time to directly distance yourself from these hateful people,” he added, referring to Focus on the Family.

In his open letter Dunlap talks a lot about the shame he felt about being gay, and says Brees attempt to shame his critics for rightly condemning his association with the anti-gay group prompted him to respond.

“So, shame has been an ever-present passenger in my life,” Dunlap wrote. “I feel like I understand it as well as nearly anybody alive. I’m no different than every gay, lesbian, bisexual, transgender, or queer person in the world. When you say, “shame on them,” when referencing the men and women with a platform who have written or discussed your video the past few days, those words are incredibly hurtful.”

On Wednesday, one day after the vulgar and offensive tweet was posted and deleted, Dunlap wrote:

Being yourself has never been more important. The hate that has infected our society threatens to tear us apart fr… https://t.co/rn4YXCrkRf
— Seth Dunlap (@Seth Dunlap) 1568226027.0