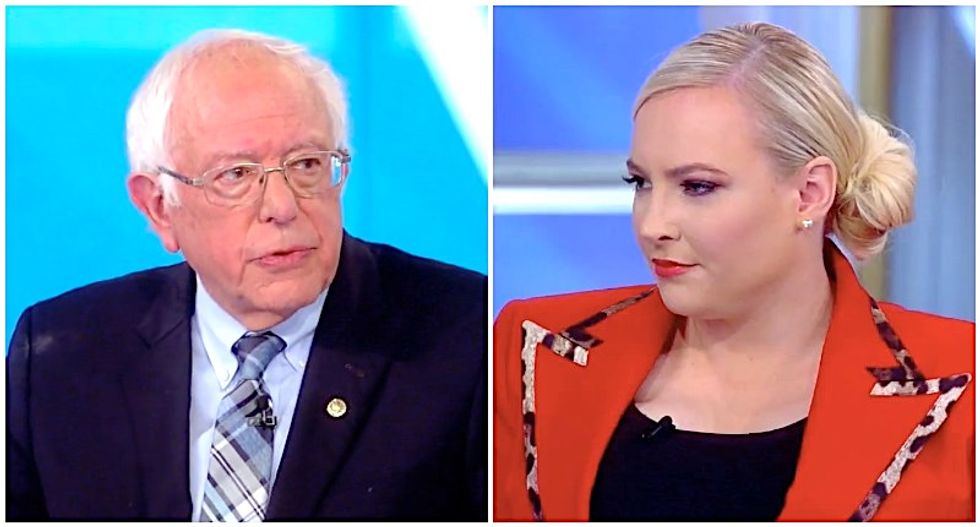 Sen. Bernie Sanders appeared on "The View," where co-host Meghan McCain pressed him on bipartisanship.

The Democratic presidential candidate proclaimed that President Donald Trump was the most dangerous president in U.S. history, but McCain interrupted to ask whether the veteran senator was willing to work with any Republicans in Congress.

"I'm generally curious about bipartisanship," she said. "Can you name any?"

Sanders quickly suggested Sen. Johnny Isakson (R-GA), who recently announced his retirement from Congress due to health reasons, but McCain was unsatisfied.

"Your dad was somebody I worked with," Sanders said.

"But they're dead or now not serving anymore," McCain said.

"Johnny is not dead," Sanders pointed out.

"Look," Sanders sighed. "Even somebody like a George W. Bush, who was a very conservative guy."

McCain cut him off, and asked if there were any Republican lawmakers currently serving in Congress who he could work with if elected president, and Sanders came up with one.

"Lamar Alexander," Sanders said. "He is head of the committee that I'm on. He's a conservative Republican."

Sanders explained to McCain why Alexander stood out from other Republicans, and the fundamental obstacles they placed before bipartisan cooperation.

"He's not a liar, a sexist, a racist or a homophobe," Sanders said, as McCain glared at him. "I worked with your dad on issues where we think people can come together. That's what politics is supposed to be about, and we have a president today, and it gives me no joy to say this. He's a pathological liar, and when people ask me, what do you think about Trump said five minutes ago in a tweet? I'm not going to say anything because 10 minutes from now, he's going to change his view, and I can't comment."