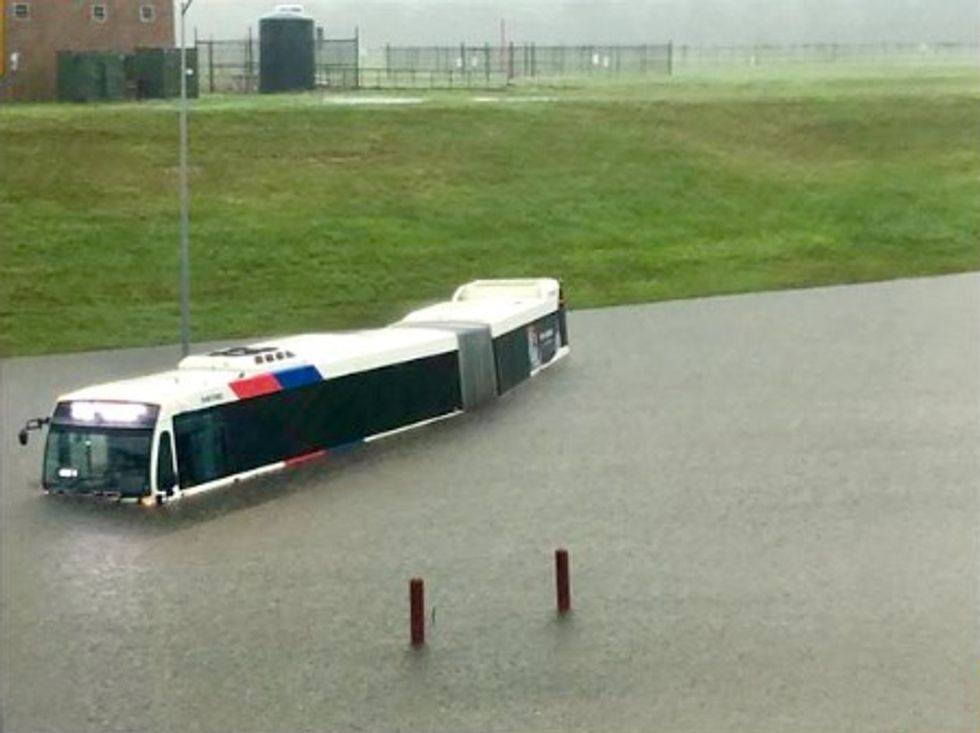 Flooding from Tropical Storm Imelda on Thursday left hundreds of people trapped in their homes and cars; led to water rescues, a hospital evacuation and power outages; and closed entire school districts, according to officials and local media. At least two people died in the storm's floodwaters, including a 19-year-old man trying to move his horse, according to media reports.

On Thursday evening, the Harris County sheriff's office tweeted that another man died after being submerged in his vehicle.

The flooding in southeast Texas drew comparisons to Hurricane Harvey, which dumped more than 50 inches of water on parts of the Houston area and southeast Texas two years ago. According to the Weather Channel, Imelda became the continental United States' fifth-wettest tropical cyclone. It dropped more than 41 inches in some areas, compared with Harvey's highest rainfall total of 60.8 inches. Still, parts of the state have been inundated worse than they were two years ago.

Residents of rural Jefferson County, especially its western half, were inundated with rainfalls that in some areas far exceeded what was forecast, a National Weather Service meteorologist told the Beaumont Enterprise. The paper also reported that about 200 people fled to a city shelter in downtown Beaumont and that Interstate 10 was closed because of flooding.

Gov. Greg Abbott declared a state of emergency Thursday morning due to flooding in more than a dozen Houston-area counties.

The declaration gave affected counties access to state resources as they continue to respond to the flooding. The governor deployed resources, including water rescue squads, to the area Monday in preparation for the storm, according to the release.

“The State of Texas is working closely with local officials and emergency personnel to provide the resources they need to keep Texans safe from Tropical Storm Imelda,” Abbott said in a statement. “I thank our first responders who are acting swiftly to help the communities that are facing this severe weather event. I urge all those in the path of this storm to take the necessary precautions and heed all warnings from local officials.”

A mandatory evacuation order was issued at 9:30 a.m. Thursday for Pinewood Estates, Countrywood Estates and Rose Hill Acres, areas north of Beaumont, according to weather.com.

Local residents posted photos on Twitter that showed water reaching close to their knees and covering the tires of standing cars.

Houston Mayor Sylvester Turner advised in a tweet Thursday morning that if people were in a safe place, like work or school, they should stay in place for the next three to four hours until the area is more clear of water.

Freeways in the Houston area flooded, Houston police Chief Art Acevedo said in a tweet. George Bush Intercontinental Airport in Houston also announced it was at a "full ground stop."

Colby Croom, a volunteer, ventured into the storm with a boat to help rescue people in the Beaumont area, he told The New York Times. Croom's cellphone was overwhelmed with calls Thursday morning. There were times when more than 10 people reached out to him in the span of a minute.

Croom helped several families escape their homes since the morning, he told the Times.

“I’ve seen water over rooftops,” he said. “I’ve seen vehicles stalled out. Man, it’s kind of like the Harvey deal all over again.”

The Houston Chronicle reported that the storm's "sudden swing-back" caught them by surprise and left many people stranded at work or on flooded streets and highways. Parents in the region were angry that at least 20 school districts remained open Thursday, the paper reported.

Many parts of Houston and southeast Texas still have not fully recovered from Harvey. And areas that didn’t flood in that catastrophic storm were hit hard by Imelda.

In 2017, Harvey swept across the Gulf of Mexico, becoming a Category 4 hurricane before it slammed into the tiny coastal town of Rockport. From there, the storm slowly moved across the state and dumped historic amounts of rain across a wide swath of southeast Texas.

Harvey’s flooding damaged or destroyed hundreds of thousands of homes. Damage estimates surpassed the $100 billion mark, and more than half a million families sought disaster relief aid. State and federal officials used the damage, which became the biggest housing recovery in modern history, as a chance to rewrite the nation’s disaster playbook. But many said those attempts slowed aid and made Texans guinea pigs.

Harvey hit Texas less than a year after a joint investigation by The Texas Tribune and ProPublica reported that unchecked development in and around Houston created short-term economic gains while increasing flood risks for homeowners and businesses. Meanwhile, climate change is only expected to bring more frequent and fierce rainstorms to the region.

Harris County voters approved a historic $2.5 billion bond package last year to finance an array of flood control projects in the Houston area. And in their first legislative session after Harvey, Texas lawmakers agreed earlier this year to draw $1.7 billion from the state’s savings account to fund repairs and flood control projects.

Although a previous version of Senate Bill 7 would have appropriated more than $3 billion from the state's savings account, that figure changed as lawmakers negotiated budget proposals. The legislation was part of a trio of disaster relief bills that Lt. Gov. Dan Patrick identified as a priority this legislative session. It establishes two funds that would provide grants and loans for flood control and mitigation projects. Imelda comes weeks before Texas voters will decide in a constitutional election whether to create one of those funds, the Flood Infrastructure Fund.