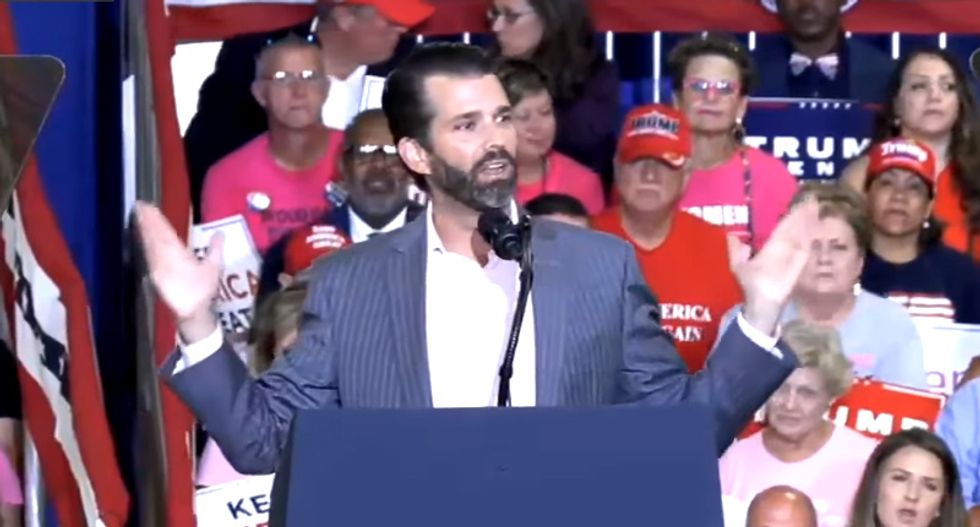 His father has been credibly accused by two dozen women of sexual misconduct, including rape. But to Donald Trump, Jr. it’s all just a punch line in service to his family’s retention of power, his father’s re-election, and his own potential 2024 run for the White House.

In the handoff between the former Fox News anchor and her boyfriend, Donald Trump, Jr., the president’s son gave Guilfoyle a kiss – then made a #MeToo “joke” – and a sexual one at that.

“I will not be getting #MeToo’d this evening, alright?” Trump Jr. “joked” to the crowd, as The Washington Post reported.

Trump Jr. nonsensically claimed the media might sue him, so he wanted everyone to see that she had consented.

And then, he said this: “Kimberly may #MeToo me later but that’s a different story.”

The Post notes that “Pollsters and political strategists believe that’s a big mistake.”

It wasn’t his first time making a #MeToo “joke.” Here’s Trump Jr. back in March, with Jerry and Becki Falwell:

US funds software for Russians to slip past censors

A US-backed campaign is giving Russians access to anti-censor software to dodge Moscow's crackdown on dissent against its invasion of Ukraine, involved groups told AFP.

Russia has intensified its restrictions on independent media since attacking its neighbor in February, with journalists under threat of prosecution for criticizing the invasion or for even referring to it as a war.

'He knows that this is all a lie': Trump insider claims ex-president told him he's 'playacting'

As part of a New York Times analysis on the impact that the Jan 6th hearings are on having on those who are skeptical that Donald Trump will be held to account for the Capitol riot that sent lawmakers fleeing, one Donald Trump insider is claiming that the former president knew fully well that he had lost the 2020 election and that he has been playing a part.

As the Times' Baker wrote, "For a year and a half, Mr. Trump has been shielded by obfuscations and mischaracterizations, benefiting from uncertainty about what he was thinking on Jan. 6, 2021," before adding, "But for a man who famously avoids leaving emails or other trails of evidence of his unspoken motives, any doubts about what was really going through Mr. Trump’s mind on that day of violence seemed to have been eviscerated by testimony presented in recent weeks by the House committee investigating the Capitol attack."