5 tips for surviving in an increasingly uncertain world 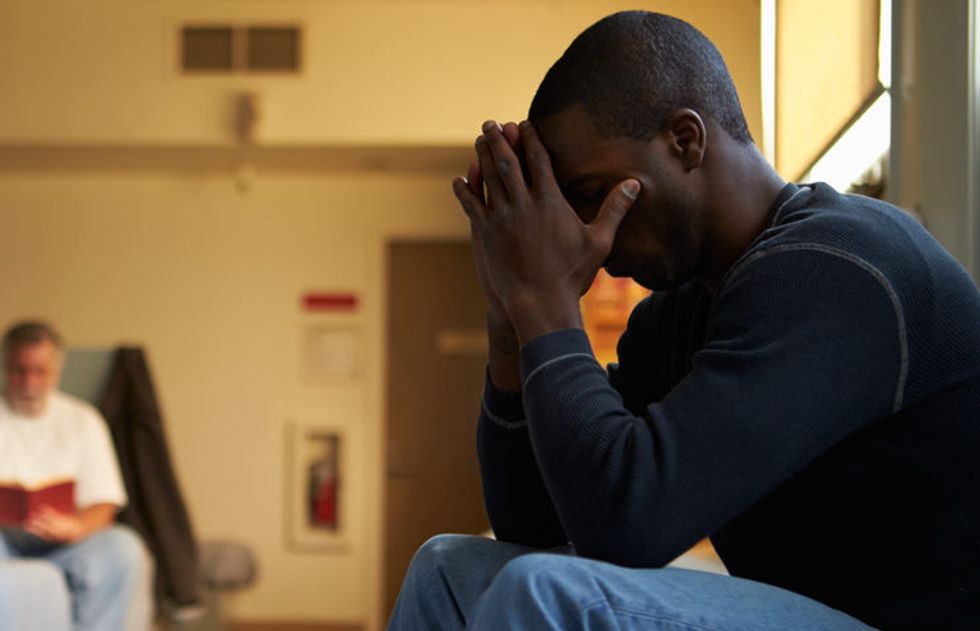 A crying, upset man sits on a bed (Shutterstock).

A recent study showed that North Americans are becoming less tolerant of uncertainty.

The U.S. presidential impeachment inquiry has added another layer of uncertainty to an already unstable situation that includes political polarization and the effects of climate change.

As a clinical psychologist in the Washington, D.C. area, I hear people report being stressed, anxious, worried, depressed and angry. Indeed, an American Psychological Association 2017 survey found that 63% of Americans were stressed by “the future of our nation,” and 57% by the “current political climate.”

Humans dislike uncertainty in most situations, but some deal with it better than others. Numerous studies link high intolerance of uncertainty to anxiety and anxiety disorders, obsessive-compulsive disorder, depression, PTSD and eating disorders.

While no one person can reduce the uncertainty of the current political situation, you can learn to decrease intolerance of uncertainty by implementing these scientifically sound strategies.

Even though humans encounter uncertain situations every day, we often avoid feeling the discomfort of facing the uncertainty.

When unsure how to best proceed with a work assignment, you might either immediately seek help, over-research or procrastinate. As you prepare for the day, uncertainty about the weather or traffic is quickly short-circuited by checking a phone. Similarly, inquiries about family or friends’ whereabouts or emotions can be instantly gratified by texting or checking social media.

All this avoidance of uncertainty leads to relief in the short run, but lessens your ability to tolerate anything short of complete certainty in the long run.

Tolerance for uncertainty is like a muscle that weakens if not used. So, work that muscle next time you face uncertainty.

Start gradually: Resist the urge to reflexively check your GPS the next time you are lost and aren’t pressured for time. Or go to a concert without Googling the band beforehand. Next, try to sit with the feelings of uncertainty for a while before you pepper your teenager with texts when he is running late. Over time, the discomfort will diminish.

2. Connect to a bigger purpose

Presidency of Italian Republic/Wikimedia, CC BY

Rita Levi-Montalcini was a promising young Jewish scientist when fascists came to power in Italy and she had to go into hiding. As World War II was raging, she set up a secret lab in her parents’ bedroom, studying cell growth. She would later say that the meaning that she derived from her work helped her to deal with the evil outside and with the ultimate uncertainty of whether she would be discovered.

What gives your life meaning? Finding or rediscovering your life purpose can help you deal with uncertainty and the stress and anxiety related to it.

Focusing on what can transcend finite human existence – whether it is religion, spirituality or dedication to a cause – can decrease uncertainty-driven worry and depression.

You might hate uncertainty because you fear how you would fare if things went badly. And you might distrust your ability to cope with the negative events that life throws your way.

Most people overestimate how bad they will feel when something bad happens. They also tend to underestimate their coping abilities.

It turns out that humans are generally resilient, even in the face of very stressful or traumatic events. If a feared outcome materializes, chances are you will deal with it better than you could now imagine. Remember that the next time uncertainty rears its head.

You have probably heard it many times by now: Sleep well, exercise and prioritize social connections if you want to have a long and happy life.

What you might not know is that the quantity and quality of sleep is also related to your ability to deal with uncertainty. Exercise, especially of the cardio variety, can increase your capacity to cope with uncertain situations and lower your stress, anxiety and depression. A new review study suggests that regular exercise may even be able to prevent the onset of anxiety and anxiety disorders.

Possibly the best tool for coping with uncertainty is making sure that you have an active and meaningful social life. Loneliness fundamentally undermines a person’s sense of safety

and makes it very hard to deal with the unpredictable nature of life.

Having even a few close family members or friends imparts a feeling that “we are in this all together,” which can protect you from psychological and physical problems.

5. Appreciate that absolute certainty is impossible

Nothing is certain in life. The sooner you start thinking about that fact, the easier it will be to face it.

Moreover, repeated attempts at predicting and controlling everything in life can backfire, leading to psychological problems like OCD.

In spite of civilization’s great progress, the fantasy of humankind’s absolute control over its environment and fate is still just that – a fantasy. So, I say to embrace the reality of uncertainty and enjoy the ride.