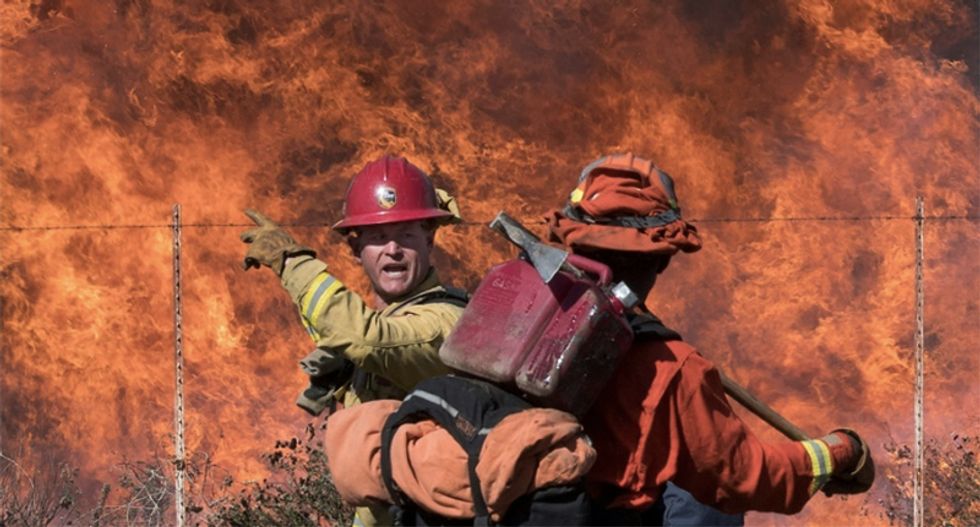 A firefighter (L) speaks to an inmate firefighter as they prepare to put out flames on the road leading to the Reagan Library during the Easy Fire in Simi Valley, California on October 30, 2019 (Photo: AFP / Mark RALSTON)

Firefighters in California struggled to contain a new fast-moving blaze on Wednesday that threatened thousands of homes and the Ronald Reagan Presidential Library, as rare "extreme" red flag warnings were issued for much of the Los Angeles region.

The so-called Easy Fire in the Simi Valley northwest of Los Angeles erupted around 6:00 am, forcing the evacuation of the library and nearby homes as it spread to more than 1,500 acres (526 hectares), officials said.

Fire crews raced to protect the hilltop library surrounded by dense brush as helicopters and aircraft dropped water and fire retardant on the flames fed by powerful wind gusts.

By evening, the fire had spared the building, though authorities warned the situation could quickly change because of the fierce winds that can spread embers for miles.

"We are still not through this," Ventura County Fire Chief Mark Lorenzen told reporters. "We have another 24 hours of significant weather conditions, and a lot of threats."

Library officials said the archives and much of the memorabilia from the Reagan administration and from his time as governor of California were safely stored in an underground fireproof vault at the facility.

"It was a crazy morning, it was unexpected," Duke Blackwood, executive director of the library told AFP. "At this point, most of the fire danger is out but there (are) still a lot of hot spots and smoke."

Authorities said it was unclear what caused the fire, which started near Easy Street and raced through hillsides toward neighborhoods.

The blaze broke out amid unprecedented "extremely critical" red flags warnings in parts of southern California because of so-called Santa Ana winds, with potential gusts of up to 80 miles per hour (130 kilometers per hour) in mountainous areas.

"We expect the Santa Anas to be howling," the National Weather Service said, adding that the red flag warnings were in effect through Thursday evening.

Some 18 million Californians live in the areas affected.

Several brush fires also erupted throughout the day Wednesday in other areas of southern California, stretching resources, shutting down schools and creating a traffic nightmare.

Closer to Los Angeles, firefighters were battling the Getty Fire, which began near the famous Getty Center museum on Monday and by Wednesday afternoon had burned 745 acres, with 27 percent containment.

Evacuation orders were lifted Wednesday afternoon for most people affected by the blaze as fire crews appeared to gain the upper hand.

Los Angeles Fire Department spokeswoman Margaret Steward said that in anticipation of the record-strong Santa Ana winds, all staff had been mobilized and additional backup brought in.

"These resources will be strategically placed in key locations that have a history of being prone to wildfire," she said.

Mandatory evacuations were also ordered on Wednesday in the Jurupa Valley, about an hour's drive east of Los Angeles, after a fire broke out near a freeway and quickly spread to 250 acres.

With the worst apparently over, some residents were allowed to return to their homes still standing on Wednesday.

Attesting to the scale of the fire, American astronaut Andrew Morgan tweeted images he took of the area on Thursday while on board the International Space Station.

"Thinking of the people who have lost their homes and the brave first responders on the front lines protecting them," he said.

California Governor Gavin Newsom has declared a statewide emergency because of the fires and the state's largest utility, Pacific Gas and Electric, has been imposing rolling blackouts in the northern and central parts of the state in a bid to reduce the fire risk.

Other utilities in the southern part of the state have also shut off power to customers.

The wildfires come as California is still reeling from the aftermath of the most destructive wildfire in state history -- the Camp Fire, which destroyed the town of Paradise and killed 86 people last year.

Similar blazes in northern California, including in the Napa and Sonoma wine regions, killed 44 people in 2017 and destroyed thousands of structures.

Remarkably, there have been no fatalities linked to this year's fires.