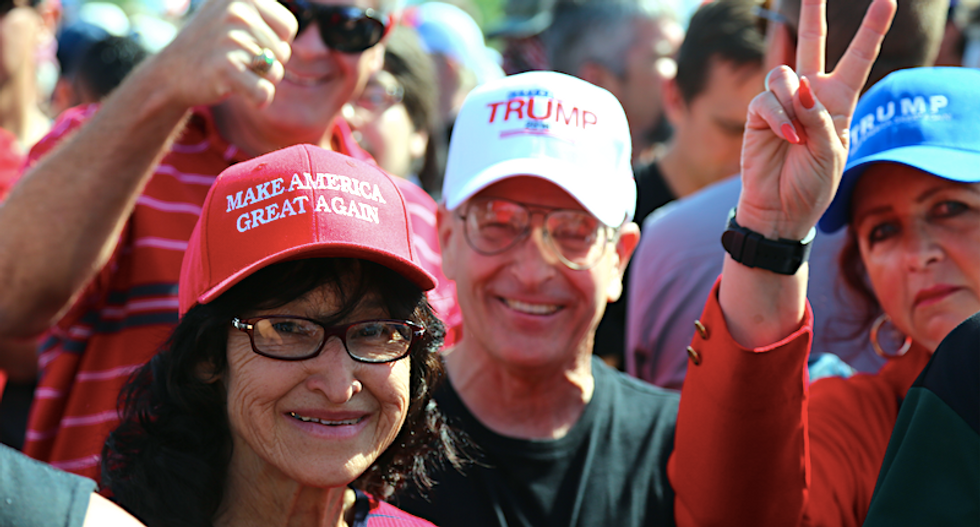 “This is the biggest thing on my bucket list, and I’m checking it off,” he said.

For Drury, of Plano, the draw wasn’t hearing Trump discuss any particular policy issue but receiving affirmation on his staunch beliefs toward Social Security and immigration policy. “They can’t live off of you and I’s benefits,” Drury said of migrants entering through the U.S.-Mexico border. “They have to work just like everybody else does.”

“We’re building a great wall along the southern border,” Trump said as raucous cheers of “build a wall” radiated from the brimming crowd. “It is going up rapidly, we are building that sucker right now, and it is having a tremendous effect.”

Trump also drew praise from the crowd as he took aim at Democrats, including House Speaker Nancy Pelosi, 2020 presidential candidates Beto O’Rourke and Joe Biden, Biden’s son Hunter (some in the crowd derisively referred to him as “Cokehead Biden”), and former President Barack Obama.

National headlines Thursday would suggest the president was having a rough day. Just hours before, his acting chief of staff admitted, then tried to walk back, that the president used military aid as leverage to pressure Ukraine into a political investigation. Hours later, Energy Secretary Rick Perry announced he was resigning at the end of the year. But Trump and his supporters were unfazed, eager to embrace the rally as a sort of therapeutic escape.

For the thousands of faithful supporters who found themselves at Thursday evening’s rally, the night was more than a political spectacle. Attendees donned bright red, white and blue garments adorned with buttons and carried signs insisting they were neither racist nor stupid. Trump strode onstage nearly an hour after he was slated to speak, but the audience paid no mind. Energized by a pump-up playlist that included Michael Jackson, Lionel Richie and Elton John, attendees waved their hands in the air, paraded blue and red “Trump-Pence” signs, and cheered and booed on cue with those who warmed up the crowd.

In talks with more than a dozen Trump supporters before and after the rally, the message was clear. Their support for Trump was steeped in two main beliefs: He’s done exactly “what he said he’d do,” and his remarks toward Democrats and people of color matched what they said and believed.

“He talks like me. He thinks like me,” said Patrick Stevenson, 34, of Arlington. “He can talk like a normal person, which is weird because the guy is a flippin’ billionaire. He’s just like a regular cab driver dude.”

Stevenson, who said he voted for Obama in 2008 because “he was black and we needed change,” didn’t fully embrace the Republican ideology until he was deployed to Afghanistan in 2011 under the Obama administration. He said he noticed a change in policy on the ground that led him to develop a callous attitude toward the military and the government.

Then Trump entered the 2016 presidential race.

“This orange guy gets on the TV and starts campaigning, you know, and it just hits home,” he said. “I’m like, ‘You know what, this guy gets me.’”

Shelly Gish of Hallsville said she believed in “everything Mr. Trump is doing.” Regarding the Democrats, she said, “All they want to do is impeach, impeach, impeach since the first day.”

“If I get to talkin’ about it, I get angry," she said, laughing a little. “He’s a smart man. The way he is diplomatin’ with other countries. He’s doing everything great.”

Although a flurry of campaign activity in Texas over the past week signaled to some Democrats that the president and his team may be wary that the state is in play, the synergy between the president and his audience last night only helped to affirm the crowd’s confidence in his grip over Texas Republicans — and their shared belief that the country under the president’s leadership is better than ever — heading into what is already a tumultuous 2020 campaign.

Trump carried Texas by 9 percentage points in 2016, the smallest margin for a Republican presidential nominee here in two decades. His approval rating typically comes in several points above water here, but recent polling has shown him trailing or only narrowly defeating a number of potential Democratic nominees in the state.

Trump, and the Texas elected officials who spoke before him Thursday, were undaunted by those stats, instead spending their time at the mic to warn that if they’re not reelected in 2020, they’ll be replaced by liberal Democrats who are “coming to get your guns.”

U.S. Sen. John Cornyn, Lt. Gov. Dan Patrick, and Trump campaign manager and former San Antonio resident Brad Parscale were among those who warmed up the crowd before Trump’s speech.

“We did not have an election in 2016. We had a revolt,” Patrick, who is chairing Trump’s campaign in Texas, said to huge cheers. “The revolution is only getting louder and larger.”

Trump’s presence also prompted outcry and a counter-rally by O’Rourke. The president’s critics decried how Trump’s sometimes vulgar language and actions have made some vulnerable people feel unsafe or unvalued. And they warned of a backlash that’s brewing among the Texas electorate.

“Tonight, this President is going to go on stage and lie to his supporters about his standing in the state of Texas and the destruction that he’s caused our state and our country,” Texas Democratic Party Chair Gilberto Hinojosa said in a statement. “Let’s be clear: the only reason Donald Trump is in Texas tonight is that he knows he will lose the state and lose this election.”

The rally and talks of an election nearly 13 months away weren’t the only things in place to help electrify the crowd. Hours before Trump took the stage, his campaign hosted 45 Fest, where supporters stood in winding lines for cheesy nachos, bobbed their heads to a medley of country music and watched various big screens that rolled pretaped interviews of the president, Donald Trump Jr., Lara Trump, and social media stars Diamond and Silk.

Attendees bemoaned the long lines to get into the arena, but many, including Drury, the man from Plano, found solace among the likeminded strangers all eager to embrace the concert-like atmosphere of the event well before Trump took the stage.

Two men got there early to buy knockoff Make America Great Again merchandise: “LGBT” shirts where the letters stood for liberty, guns, beer and Trump. Nicole Rogers, a 34-year-old corrections officer who had flown in from New Mexico that morning to attend, paraded around with a sign declaring she was gay but not stupid.

For some, the lead-up to the rally was better than seeing it firsthand.

Nathan Quick, 51, drove from North Carolina with his cousin to sell merchandise adjacent to the American Airlines Center. Quick estimated that Thursday was his 80th Trump rally.

“He’s a man of his word,” Quick said. “I follow him everywhere because he hasn’t told a lie yet.”

The president’s speech stuck to his main points on the campaign trail — the fake news, the whistleblower who spurred an impeachment inquiry, a trade war with China, the country’s economic performance during his term, his friendships with Republican politicians in the state and his strongly held belief that he will be reelected president.

Alicia Lyon of Garland predicted that would be the case before the rally started. “He’s not a robot practicing his speech in a mirror,” she said of Trump. “What you see is what you get.”

“He’s a human, and everyone who says, ‘Well he’s not presidential,’” she said. "Well what does that really mean? To me, that’s fake.”

She laughed a little before insisting that the media would twist and spin Trump’s words to “fit their agenda” regardless of what he said onstage. But much like Trump during his speech, she was unperturbed. That’s just one inconvenience, she said, of defending a man who is “doing everything right.”