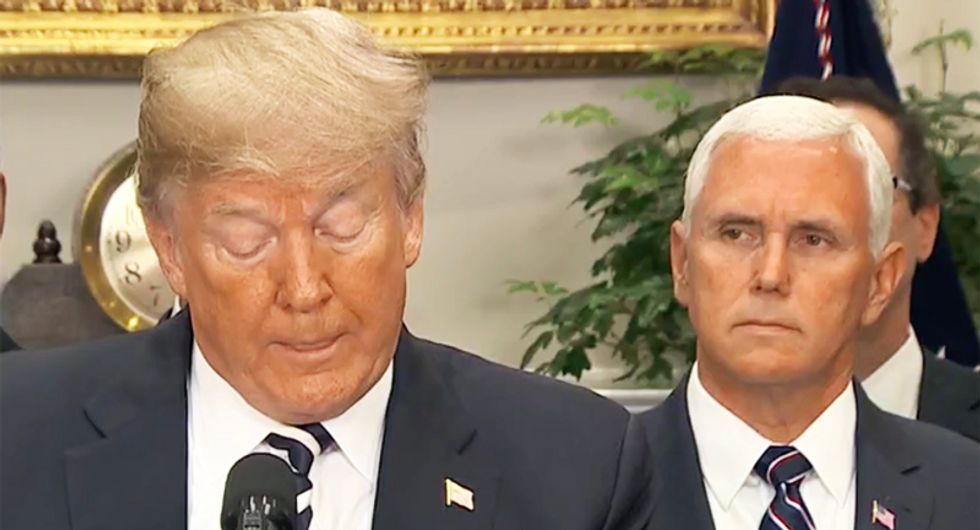 Days after amplifying a right-wing pastor's warning of a "Civil War-like fracture" if he is removed from office, President Donald Trump late Tuesday said the impeachment inquiry launched by House Democrats is a "coup," heightening fears that Trump could refuse to allow a peaceful transition of power if he is ousted by Congress or defeated in 2020.

"As I learn more and more each day," the president tweeted, "I am coming to the conclusion that what is taking place is not an impeachment, it is a COUP, intended to take away the Power of the People, their VOTE, their Freedoms, their Second Amendment, Religion, Military, Border Wall, and their God-given rights as a Citizen of The United States of America!"

Observers reacted with alarm to Trump's tweet and said it should not be treated as a typical online outburst from the president.

"This is extremely dangerous," Matthew Gertz, senior fellow at Media Matters, said, pointing out that Fox News hosts and contributors have been aggressively pushing the "coup" narrative in recent days.

Historian Angus Johnston asked in response to Trump's tweet: What happens when he tweets something like this the day after he loses re-election?"

"The orderly transfer of power in the United States has always depended on the active cooperation of the outgoing president. What happens if that cooperation is not forthcoming? The answer—the day-to-day answer for November and December 2020 and January 2021—isn't obvious," Johnston said. "Tweets like tonight's crank up the costs of breaking with Trump, but they also underscore the fact that there's no guarantee that waiting him out will be an effective alternate strategy."

Concerns that Trump could resist leaving office if ousted by the constitutional process of impeachment or defeated in the 2020 election are not new. Trump has repeatedly suggested on Twitter and during campaign rallies that his term should be extended to compensate for the time "stolen" by the Mueller investigation.

"This is not a drill, and there is no reason to believe Trump will go quietly if he is defeated," wrote The Intercept's Mehdi Hasan in a column in March. "There is every reason, however, to believe he and his allies will incite hysteria and even violence. Those who assume otherwise haven’t been paying attention."

In the days since House Democrats formally began their impeachment inquiry last month, Trump has rapidly escalated his hysterical attacks on political opponents and the whistleblower who raised alarm about the president's call with Ukraine's leader.

Last week, as Common Dreams reported, Trump suggested the person who provided information about Trump's call with the Ukrainian president is a spy and a traitor should be executed. On Sunday, Trump warned of "big consequences" for the whistleblower as the anonymous individual's lawyers said the president's attacks have put the person's safety at risk.

On Monday, Trump asked whether Rep. Adam Schiff (D-Calif.), chairman of the House Intelligence Committee, should be arrested for "treason," a crime punishable by death.

Following the president's "coup" tweet Tuesday night, Trita Parsi, executive vice president of the Quincy Institute, said "the logical conclusion of this nonsensical statement is that the military should step in, save Trump, and arrest Trump's political opponents."

"Let that sink in," Parsi added.

Former Minneapolis police officer Derek Chauvin has appealed his conviction for the murder of George Floyd, citing 14 complaints about his high-profile trial earlier this year in a case that roiled the United States and laid bare deep racial divisions.

The killing of Floyd, a 46-year-old Black man, in May 2020 went viral after being caught on camera and sparked America's biggest demonstrations for racial justice in decades.

CDC overrules panel to back COVID boosters for at-risk workers

The Centers for Disease Control and Prevention (CDC) on Friday overruled its own panel of health experts to back Pfizer Covid vaccine booster shots for individuals at high risk of exposure because of their jobs.

CDC director Rochelle Walensky said the agency had to act on "complex, often imperfect data" for the greater good of public health.