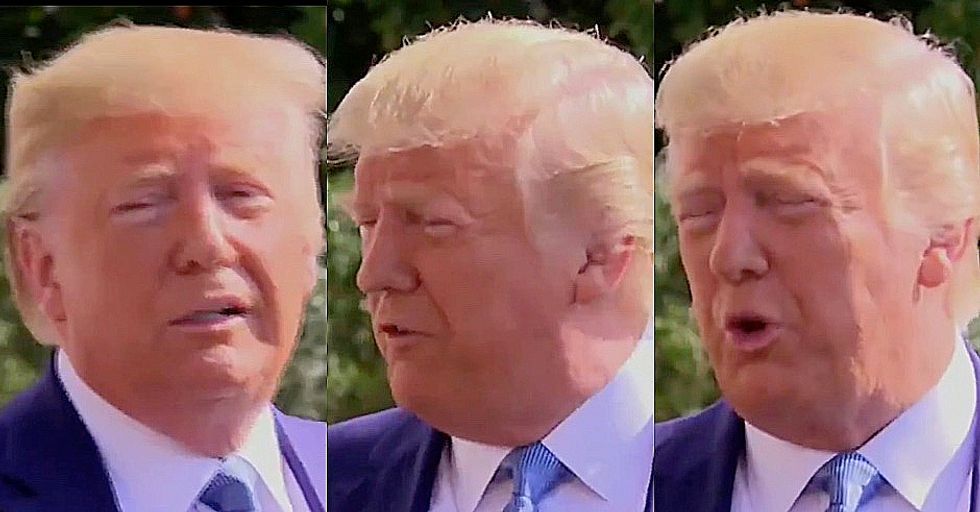 Legal scholars and experts are taking to Twitter to call out the letter from the White House to the House of Representatives, saying that they don't recognize the impeachment inquiry as legitimate.

“As you know, you have designed and implemented your inquiry in a manner that violates fundamental fairness and Constitutionally mandated due process,” the letter says according to CNN’s Jim Acosta. “You have denied the president the right to cross-examine witnesses, to call witnesses, to receive transcripts of testimony, to have access to evidence, to have counsel present and many other basic rights guaranteed to all Americans.”

What one University of Texas Law professor noted is that Trump is trying to have it both ways. On one hand, his Department of Justice said he couldn't be indicted because of the Office of Legal Counsel decision saying a sitting president can't be indicted. In this case, Trump is saying he can't be impeached because he deserves "due process" which requires indictment and a legal proceeding.

"You don't get to block impeachment just because you don't like it," said former acting Solicitor General Neal Katyal.

He went on to explain why it's flawed for Trump to claim that Americans must wait until 2020 to get their justice.

Even conservative attorney Heath Mayo explained why "this letter is objectively absurd."

From a legal perspective, this letter is objectively absurd. This is the indictment phase of impeachment. How can t… https://t.co/ytCzGzE6cl
— Heath Mayo (@Heath Mayo)1570570450.0

DC lawyer George Conway said that it's clear Trump's lawyers are willing to say whatever the boss tells them.

Trump Administration: We’ll say anything the boss wants us to regardless of whether it makes sense. https://t.co/wWVRgvOt8X
— George Conway (@George Conway)1570571101.0

Meanwhile, activists are calling it another obstruction of justice.

The White House just documented their #ObstructionOfJustice in a letter to congress refusing to cooperate with impe… https://t.co/qXUBaV4RUW
— ALT-immigration 🛂 (@ALT-immigration 🛂)1570570629.0

You can read other legal commentators below:

Wow. This letter is bananas. A barely-lawyered temper tantrum. A middle finger to Congress and its oversight respon… https://t.co/OFm0h9eMXX
— Gregg Nunziata (@Gregg Nunziata)1570570638.0