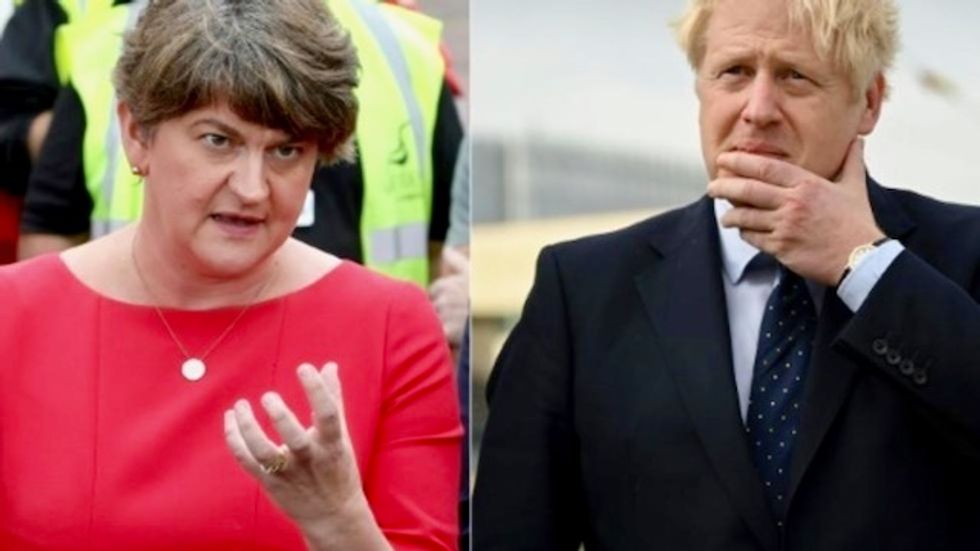 Northern Ireland's Democratic Unionist Party has been at the heart of Britain's Brexit saga, and its annual conference Saturday will see it try to maintain its prominent role.

Once a fringe faction in parliament, Brexit has given the DUP added importance, with the party holding key votes that could have helped Conservative parliamentary allies and their Prime Minister Boris Johnson pass the EU withdrawal deal.

But fearful for the future of Northern Ireland's union with mainland Britain, DUP leader Arlene Foster is expected to take to the stage to slate Johnson's freshly negotiated deal.

Foster last week called on lawmakers to hold out for a deal that "protects the economic and constitutional integrity" of the United Kingdom.

Since the 2017 election her pronouncements have weighed heavy on Westminster -- blocking former prime minister Theresa May's Brexit deal and helping oust her from office.

But with Johnson helming a newly invigorated Tory party, there are signs the DUP's power is on the wane.

Though the pact was agreed in principal, gaining its support for any Brexit deal has thus far proven impossible.

The DUP's assent is contingent on a set of "red line" principals -- centering on a fervent devotion to the union of the province of Northern Ireland with mainland Britain.

The party three times denied May votes for her Brexit deal, spurring her exit from office in July and sealing their reputation as the Brexit kingmakers.

Johnson's freshly negotiated Brexit agreement is the latest to fail the DUP's tests.

Last year Johnson was greeted as the guest of honour at the DUP party conference, receiving rapturous cheers.

This year his deal, which would keep Northern Ireland in partial alignment with some EU rules and standards, was the target of ire.

The DUP's tough stance puts it in a tricky political spot in Northern Ireland, which voted against Brexit by 56-44 percent.

Polls show the party losing up to three seats in an early election sought by Johnson -- which the DUP is against.

At a meeting of unionists and more hardcore loyalists held Monday in Belfast, one pamphlet called Johnson's deal a "betrayal act".

"I think (the DUP) are entering very dangerous territory at this point in time," Bryson warned. "The message to the DUP is to stand firm."

But the DUP's disdain for Johnson's deal may not hold as much sway as it did over May's failed agreement.

This week parliament approved Johnson's Brexit plan "in principle". It marked a first for any Brexit agreement, and happened without the DUP's support.

Some feel the party's pro-Brexit stance puts it at odds with its unionist traditions -- and could ultimately be its undoing.

Unless the sides come up with a different solution, Brexit will require some form of checks at British borders when the country leaves the EU's single market and customs union.

All sides agree these cannot be done along the Irish border, which was rendered "invisible" under a 1998 peace accord that end three decades of bombings and bloodshed known as "The Troubles".

The long-running conflict pitted the Catholic IRA, supporting a united Ireland, against Protestant 'loyalist' groups who favoured remaining in the United Kingdom.

The Brexit deal championed by Johnson would require administrative checks along the Irish Sea, a solution the DUP says would split the UK.

"The party is right to claim that the new deal will, over time, loosen Northern Ireland's place within the union," commentator Fintan O'Toole wrote in the Irish Times last week.