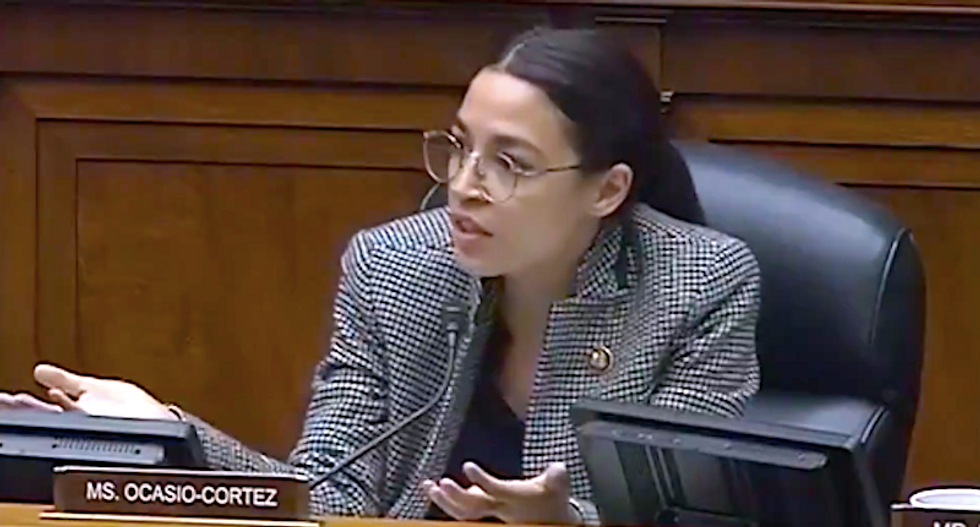 Rep. Alexandria Ocasio-Cortez (D-NY) called out her Republican colleagues for moving to adjourn a House Oversight Committee hearing so they could attempt to crash a closed-door hearing as part of the impeachment inquiry.

The motion to adjourn was introduced by Rep. Paul Gosar (R-AZ), who complained that lawmakers "should not be forced to choose between attending Adam Schiff's secret impeachment interviews or attending Committee hearings."

Rep. Alex Mooney (R-WV) tried unsuccessfully to barge into the House Intelligence Committee hearing where Lt. Col. Alexander Vindman was testifying Tuesday about a phone call he heard between President Donald Trump and his Ukrainian counterpart -- and Ocasio-Cortez urged her GOP colleagues to focus on the jobs they're expected to do.

"I would like to do my job," Ocasio-Cortez said, "and I try not to get out of my job at every opportunity."

"We're here to talk about the very pressing issue of cutting our carbon emissions and saving our planet," she continued, "and we have an entire political party that's trying to get out of their job, adjourn this hearing, and I just want to know what the reason for such a disrespect of our process would potentially be."

"Do we have a reason for why this hearing is trying to be adjourned, or do we have just, like, a cocktail party to go to?" Ocasio-Cortez added.

Rep. Kelly Armstrong (R-ND) complained that he was distracted from the Oversight hearing because of the closed-door hearing taking place in the Capitol's Sensitive Compartmented Information Facility.

Ocasio-Cortez asked what that had to do with the oil industry, which Armstrong had pointed out was his state's second-largest industry.

"I want to participate in this hearing, but I also feel the need in the SCIF because we're only one of three committees that's allowed to be in the room," Armstrong said. "I can do a lot of things, I can't be in two places at once. I'm completely comfortable having this hearing, I'd just prefer to have it at a time when I can participate in it."

The motion to adjourn failed along party lines, and committee chairman Rep. Harley Rouda (D-CA) laid into his GOP colleagues for their attempted stunt.

"I have to say I'm very disappointed in these antics," he said. "I have been in the SCIF room for many of these depositions, and many of the members that are afforded the ability from this committee to go there have not been in many of those depositions."

"The fact that they seem to want to make it an issue now clearly shows they care more about process and trying to prevent the good work of this committee to do the investigative work it is obligated to do under the Constitution to protect the president at all costs, instead of doing their duty, is disappointing," Rouda added. "The fact that we have several members here that have been to this (Environment) Subcommittee meeting for the first time ever is incredibly disappointing."