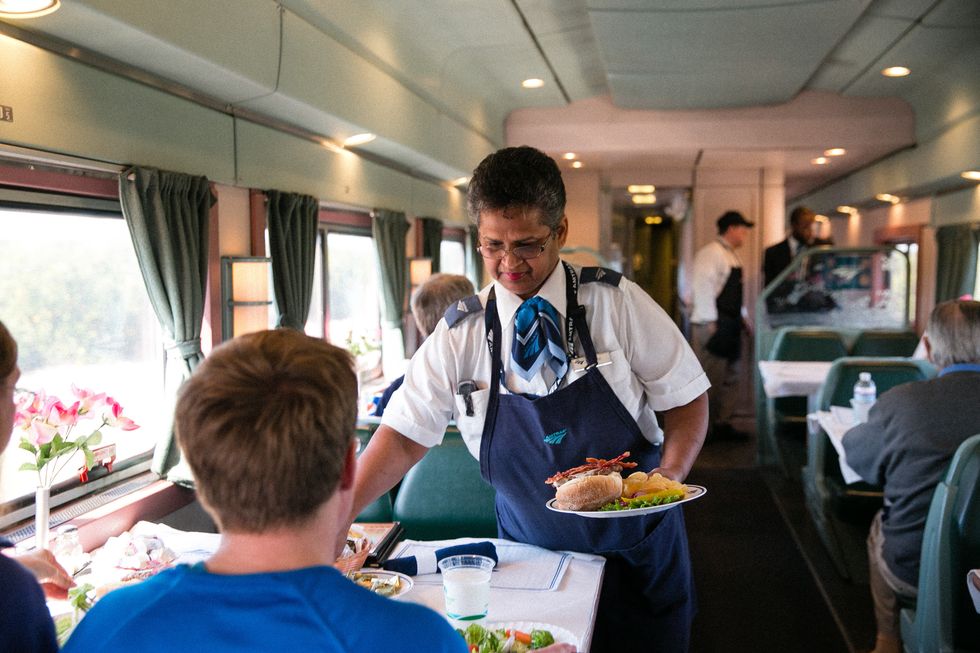 Separate and unequal passenger rail travel is back at the behest of the Trump administration. Unlike the infamous 1896 Supreme Court decision known as Plessy, which denied African Americans travel in cars occupied by whites and relegated them to inferior rail cars, this new segregation is based solely on money.

Team Trump forced Amtrak to limit dining car access on four long haul routes to passengers who paid for roomettes. More routes will be affected in the future.

Those in the cheap seats are now barred from the dining cars.

That would draw applause from Madam Pompadour, the mistress of King Louis XV whose Le Petit Trianon at Versailles was to have a cleverly designed dining table that was to rise up through the floor from the kitchen below. That way the royals wouldn’t have to see, or smell, the servants. Construction of the rising dining table was cut off by the French Revolution.

Team Trump hates passenger trains. In its first budget the Trump administration proposed to halve the federal appropriation for Amtrak, which would have put American passenger train service into a death spiral. Congress refused to go along in 2018 even with Republicans in control of both House and Senate. But Team Trump has been all in with a 2015 law requiring Amtrak to break even on its food service or get rid of it, part of the long term strategy by rail opponents to quietly strangle Amtrak.

No Mixing of Economic Classes

What has been missed by most news outlets, however, is the context of how the new policy favors the better off.  “America’s Railroad,” isn’t cutting back service for all passengers, just those who cannot afford the price of a sleeping car service in Amtrak roomettes.

Trump consistently favors the rich over everyone else, as his new Amtrak segregation policy illuminates.

Historically Amtrak dining cars had tables with linens, prepared meals cooked to order and took reservations for seating time. Passengers who paid a premium for private roomettes had the cost of meals built into their fares. All other classes were also welcome in the dining car, they just paid for their meals.

Team Trump is ending integration of economic classes and denying the ability to purchase dining car meals for coach passengers.

While Trump claims to be the champion of the common man, his administration consistently favors the rich over everyone else, as its new Amtrak economic segregation policy illustrates. Trump and the GOP increased subsidies for private jets, for example.

Amtrak will now offer “an exclusive lounge space” for passengers who can afford roomettes. It even provides them with the option of room service meals.

Those meals for passengers paying premium prices include red wine braised beef as well as creole shrimp and andouille sausage. The first beer or glass of wine is included.

But even these premium passengers will no longer enjoy table linens. And instead of freshly cooked eggs for breakfast they will get a "deluxe" continental breakfast. That means sugary and starchy breads along with hard boiled eggs. But what else should we to expect from an administration headed by a gourmand who eats Kentucky Fried Chicken out of the bucket?

What about passengers in coach who want a meal? They can buy snacks and packed food on board.

Said Anderson:  “Traveling on one of our trains has never been just about the destination – the journey is part of the adventure.  We continue to evolve our onboard accommodations and dining experience to meet the needs of today’s customers.”

Since the 19th Century that adventure has always included dining cars on long haul trains. How do snacks meet the “evolving needs” of passengers? For sure the policy will get no complaints from makers of insulin.

At some point coach passengers may be allowed to purchase the same meals offered to customers who pay for roomettes. “Coach riders will eventually be able to buy the meals offered to premium riders,” the Washington Post reported.

The new economic segregation policy is already in effect on the New York to Chicago Cardinal, the Chicago to New Orleans City of New Orleans, the New Orleans to New York City Crescent and the New York to Miami Silver Meteor. In 2020 it will apply to a second New York-Miami run called the Silver Star.

Coach passengers on other overnight trains can expect the policy to afflict their travels in the future.

Amtrak, without publishing its analysis, anticipates saving $2 million annually. So how significant is the savings achieved by segregating Amtrak’s most affluent passengers from the hoi polloi?

Measured against total  revenue, the savings come to just $1 in every $3,450 based on the latest Amtrak budget. That's insignificant savings in Amtrak spends roughly $6.9 billion annual spending..

There may be no savings at all. Economic segregation and degrading meal service will almost certainly suppress ticket sales at all fares. That will likely result in fewer people riding Amtrak, especially long haul trains.

Killing train service, especially long distance train service, has been a longtime goal of libertarians who have attached themselves to Team Trump's anti-Amtrak ways. Amtrak is also a target of  rightwing intellectuals like George Will.

While Team Trump works to starve Amtrak to death, the rest of the world is busy building high speed trains. China has completed 18,000 miles of high-speed passenger rails. It plans 12,000 more miles. French and Japanese trains race along on wheels at more than twice the speed of Amtrak’s fastest trains.

But instead of looking forward, Team Trump is looking backward. Don’t be surprised if the president proposes to bring back coal-fired steam locomotives. After all, repeatedly he said he wants steam catapults ripped out of our new Gerald Ford class aircraft carriers. They come with much faster and more powerful electric catapults tat Trump claims are too difficult to understand. And Trump often expresses his love for the dirtiest of carbon fuels, calling it “beautiful coal.” Make America 19th Century Again.