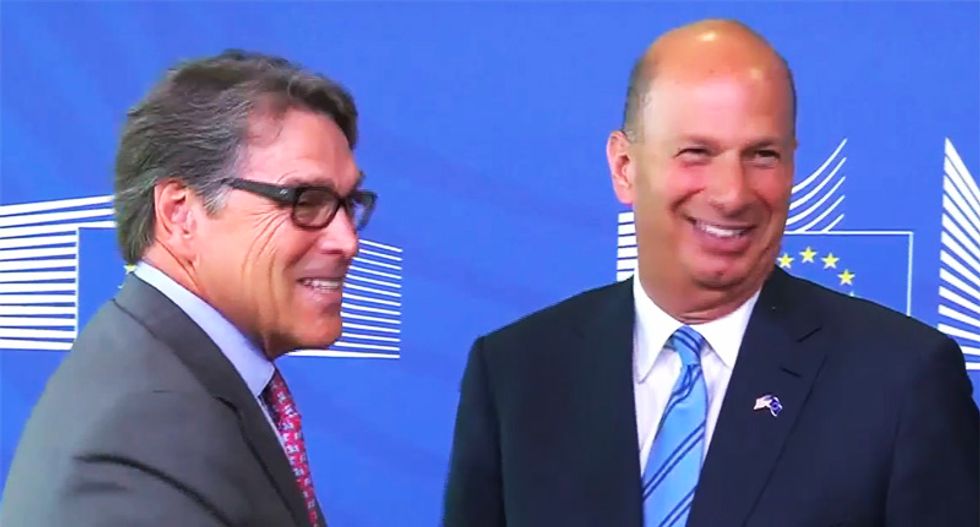 State Department official Bill Taylor delivered a shot of adrenaline to the impeachment inquiry into President Donald Trump on Tuesday, providing testimony to the House of Representatives that was more detailed and damning that even many of the White House's fiercest critics anticipated. But in addition to powerfully strengthening the case that Trump engaged in a serious abuse of power and potential criminal wrongdoing in the Ukraine scandal, it raised the possibility that U.S. Ambassador to the European Union Gordon Sondland may have broken the law in his previous testimony to Congress.

Sondland, who texts show was a key figure in Trump's efforts to get Ukraine to investigate former Vice President Joe Biden and his son, downplayed his role and his knowledge of the scheme in testimony to lawmakers last week. If he lied in this testimony, he could be open to criminal charges.

And after hearing Taylor's testimony on Tuesday, some Democrats were sent signals that Sondland's testimony may now be in doubt.

"After today, Mr. Sondland is going to have some explaining to do," Democrat Rep. Raja Krishnamoorthi of Illinois said.

And Olivia Gazis of CBS News tweeted: "One Democrat lawmaker says Amb. Sondland may indeed be facing a criminal referral for perjury."

More details about the potential wrongdoing weren't immediately provided, but Taylor's testimony placed Sondland much more at the center of the Ukraine scheme than Sondland himself had indicated.

Now there's a lot going on here, but there are several key details to pick out. First, Sondland is very specific with his words — suspiciously so. He uses phrases like "I do not recall" strategically, which could make it hard to pin him down on a perjury allegation. And when he made what seemed to be sweeping denials, some are actually rather specific. For example, he said he doesn't remember "any discussions with the White House on withholding U.S. security assistance from Ukraine in return for assistance with the President's 2020 re-election campaign." But this doesn't really rule out withholding the aid for investigations into Biden — which Sondland could claim that he didn't think had anything to do with the helping Trump's 2020 campaign. (It's important to note that only Sondland and Taylor's opening statements are public — they each provided much more extensive testimony in question periods with the lawmakers that may have included less careful phrasing.)

So does anything here not match up? It does seem that Sondland tried to skirt around the truth with his statement.

Perhaps the most dangerous territory for Sondland is when he claimed he does not "recall taking part in any effort to encourage an investigation into the Bidens." Taylor's testimony strongly indicated that Sondland did repeatedly take part in this effort.

If this is true, then it would suggest Sondland was lying when he said he wasn't part of an effort to get Ukraine to investigate Biden.

Taylor appears to be a credible witness, and reports found that he had extensive notes and records to corroborate his claims. If those records can show Sondland knew more than he claimed to, that could be damning. However, the text of the two statements themselves to do not seem decisive on the question of whether Sondland provably lied. Taylor's claim about Sondland's knowledge is vague, and he could have been mistaken about the extent to which Sondland was informed. Some of Taylor's testimony relied on second-hand claims from Tim Morrison, who serves on the National Security Council. Moreover, even if Sondland did in fact lie, proving what Sondland knew and when could be very challenging.

Of course, even if there is strong evidence that Sondland lied to Congress, and the case is referred for prosecution, it's not clear Attorney General Bill Barr's Justice Department would be willing to bring charges.

Whatever potential charges could be brought against Sondland, however, are much less significant than the facts that Taylor presented. In providing powerful testimony that Trump engaged in a quid pro quo to get Ukraine to go after Biden, Taylor knocked the legs out from under Republicans' defenses of the president as impeachment proceeds.

The U.S. Secret Service will protect former President Donald Trump and more than a dozen members of his family, including extended family members, after the 45th President, defying usual agency regulations, ordered the expanded protections.

"Trump issued a directive to extend post-presidency Secret Service protection to 14 members of his family who were not automatically entitled to receive it," The Washington Post reports.